Aston Villa have confirmed the signing of young full-back Walter Chini from Serie A side Vicenza for a hefty price of 4 million. 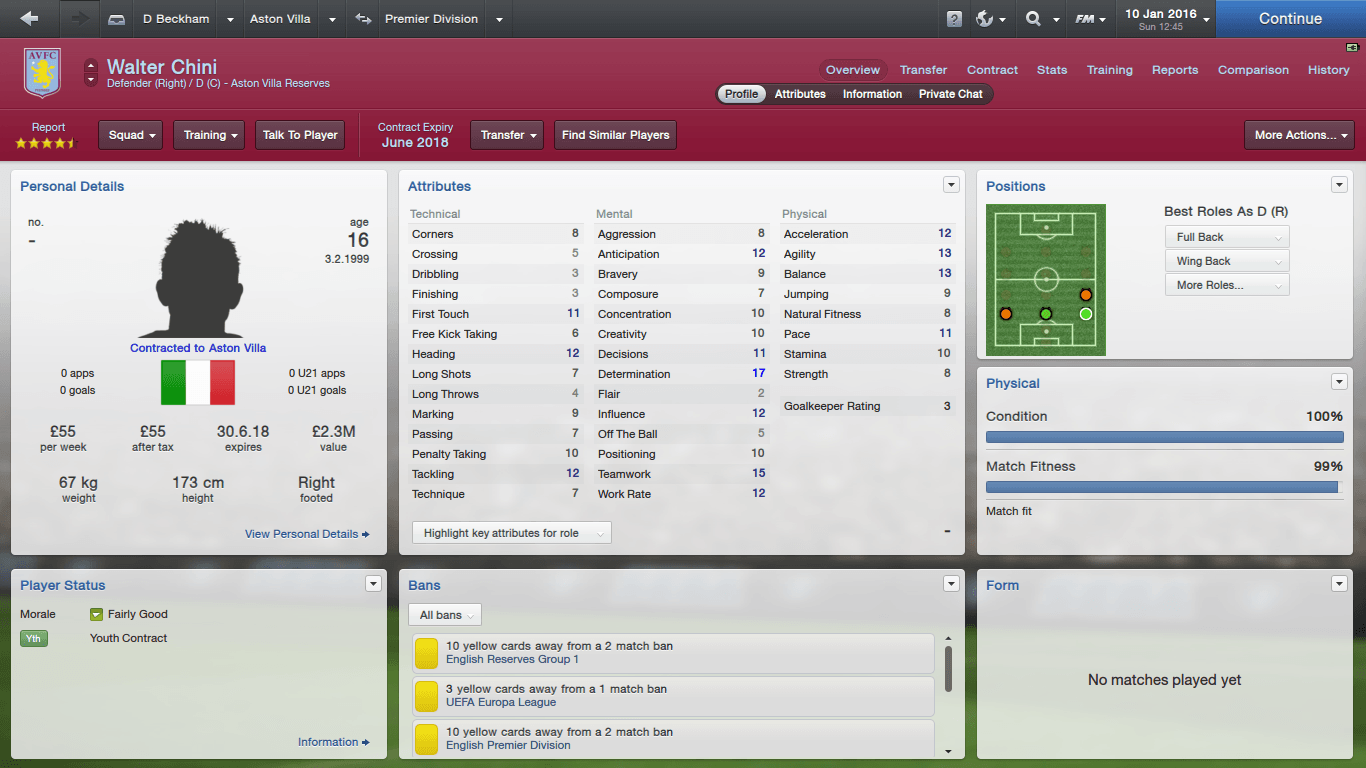 However, manager David Beckham does not appear to regret paying that seemingly overpriced sum for the 16-year-old Italian.

Chini has been impressing in the Vicenza academy and is looking like one of the finest youngsters the Italian club has produced in recent years. However, he has now left to make a name for himself in England.

Beckham has been signing numerous wonder kids since his appointment as Villa boss three years ago, adopting a building from young policy. In this interview where he unveils Chini as a Villa player, he also controversially refers to himself as 'David Saville' as a reference to well-known pedophile Jimmy Saville, and that is something that's sure to attract criticism from viewers.

Controversy aside, the signing of Chini might be overpriced, but he could very well be worth 10 million more in the future.
Login to Quote

Jamesg237
9 years
It can become quite frustrating when wonderkid regens cost a fortune, especially when you are needing to rebuild. What a dominating win against Spurs too, congrats.

I thought becoming David Beckham would make for a good story and to be honest I was wrong. It has made a great story! Keep it up Glenn!
Login to Quote

2013-03-29 23:19#88000 Jamesg237 : It can become quite frustrating when wonderkid regens cost a fortune, especially when you are needing to rebuild. What a dominating win against Spurs too, congrats.

I thought becoming David Beckham would make for a good story and to be honest I was wrong. It has made a great story! Keep it up Glenn!

Cheers James! North London has bowed down to me because I've beat Arsenal 3-2 as well

Jer
9 years
What do you mean by bow down Glenn ;)! Heheheh! I agree with James about the transfer, but knowing how your stories were before, I knew it was going to be DA BOMB. Spurs got owned by Beckham and Villa! LIKE A BAWS

Leamington Brakes: Back from Obscurity

Breaking news from Sky Sports today is that the Aston Villa board are keen on forging a link with lower league club Leamington Brakes. Brakes have had a fantastic season and are looking set to win the Blue Square North league, as well as promotion to the Blue Square Premier. Their manager, Jason Lippitt, has often been compared to Villa manager David Beckham as the "David Beckham of the lower leagues" in the sense that both are young and talented managers in different levels.

Before today, no one in the footballing world knew what Beckham knew about this particular lower league club, but our Sky Sports interviewers are determined to change that, with an interview with Beckham about the possible link-up already scheduled. 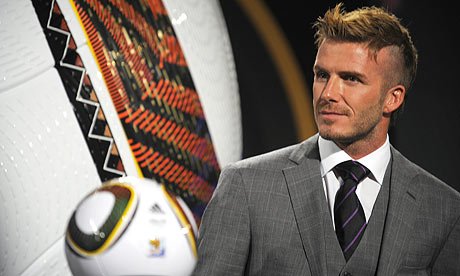 "Hello, David, you are live on Sky Sports News. In the press today there are reports your Aston Villa side might be becoming affiliated with Leamington Brakes. Who are they and what do you know about them?"

"They are a club in one of the lower leagues, the BSN, aren't they? They've done very well this season to get promoted and all. They also have a bloody good manager, that's my opinion. That's what I know about them."

"Yes, their manager is Jason Lippitt. They are looking set to be in the Blue Square Premier next season but why do the board at Aston Villa think this is a good move? Surely you would be better with, perhaps, a Championship or League One team?"

"Leamington Brakes are a club that's going places. Why would the board not want to be affiliated with such a club? This can only bring benefits for both sides and I think it's an easy decision, really."

Have you been following them and if so who has impressed you the most? Can you see Villa youngsters being sent there for experience?

"I have, obviously. I don't think anyone who has a real passion for football are doing the same. Leamington have been such an exciting club and a lot of my fellow coaches talk about it sometimes. I can't wait for us to link up. As for the youngsters side, I think it's a great way for them to get some experience, and I will definitely be looking to send my youngsters there if they can't get a game - as long as Jason wants them, of course." 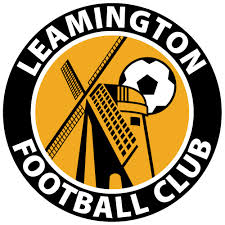 January: Out of the Cup

Discussions about Leamington Brakes and Aston Villa having a possible affiliation in the near future are all that has been discussed this month, but it's time to get back to the football. Villa continued to show their season's brilliance this month but the FA Cup holders were unluckily kicked from the competition by Chelsea as the Blues defeated last season's cup winners with a lucky last-minute goal from Juan Mata. 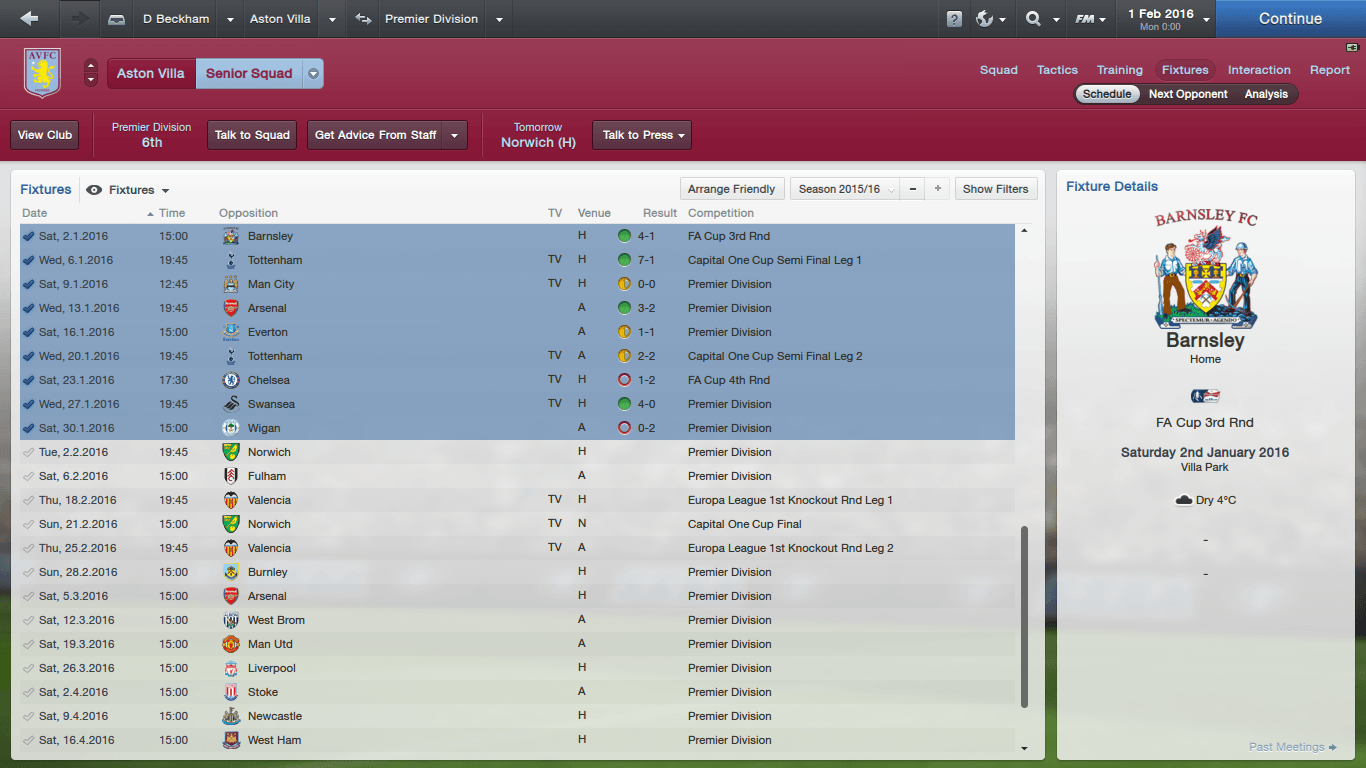 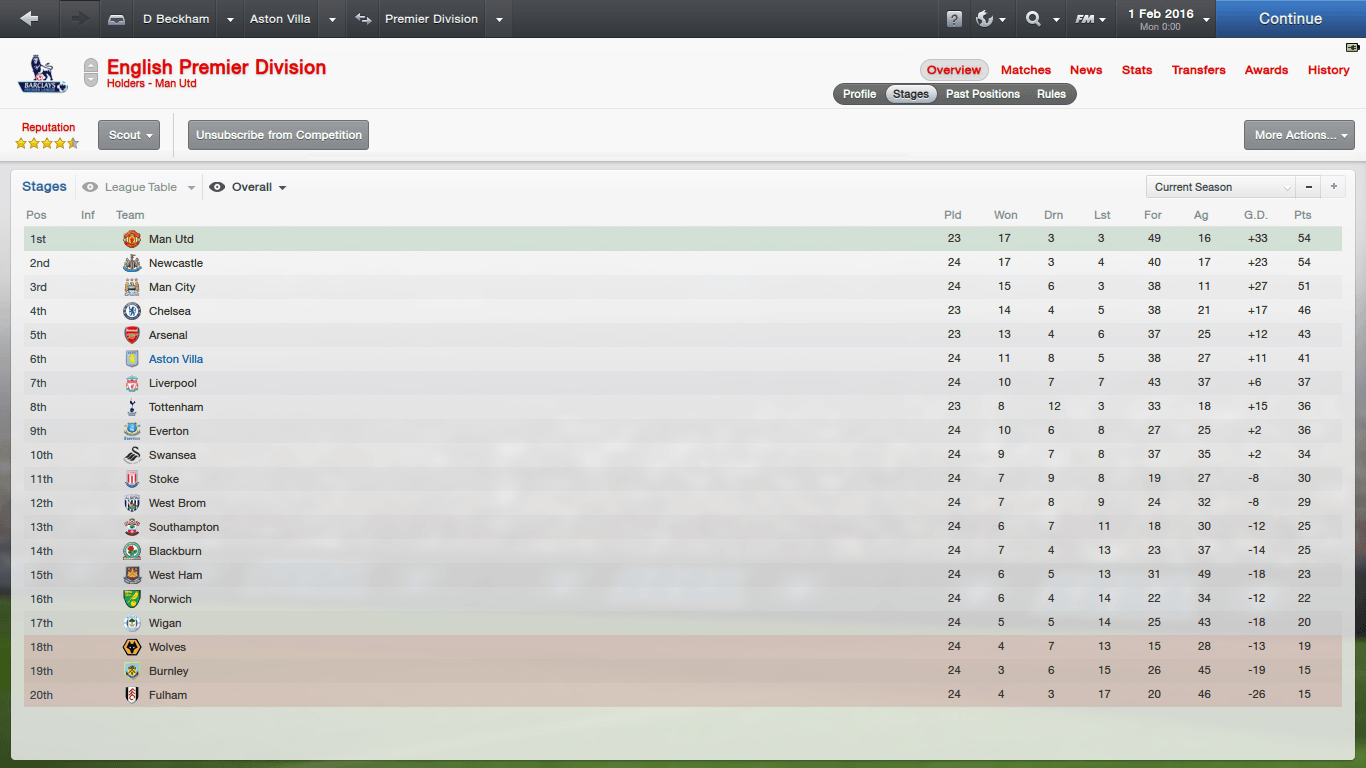 His devilish finishing and constant threatening this month has confirmed his status as Aston Villa's favorite new bully of defenders and has also earned Carlos Fierro the month's Young Player of the Month award. Will Hughes comes in runner-up. 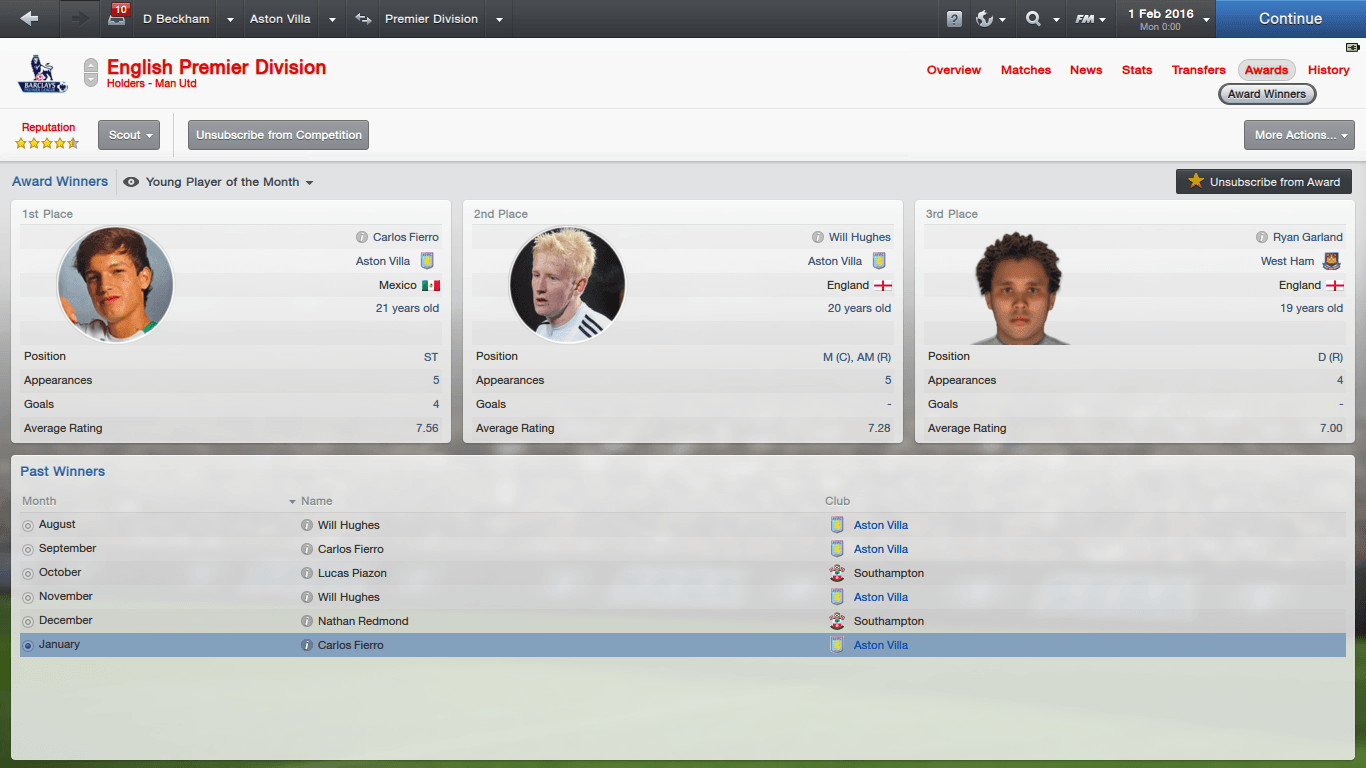 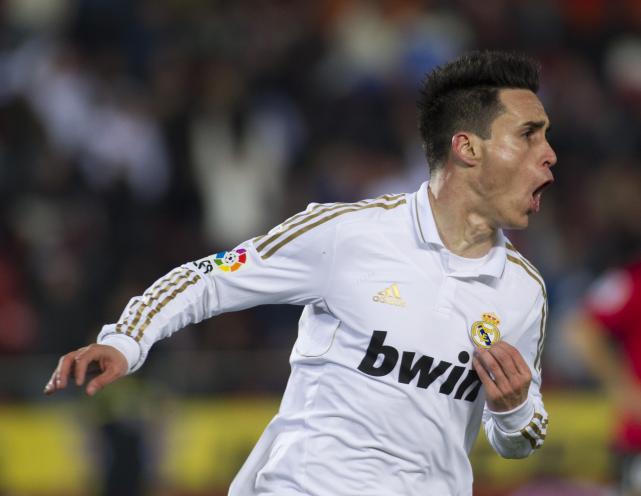 The Spaniard joined Villa from Real Madrid on a free transfer and commanded wages of 60,000 per week but played only 5 games and scored 1 goal in the Premier League in his time with the Villans. He has now been shipped out to West Ham for a fee of 2 million.

David Beckham explained that Callejon was being kept out of the squad by "other younger, better players" and that a move away from Villa would "benefit everyone".

"Jose is a quality player but we have better players in his position. He was fantastic in the six months he's been here so we would like to thank him for his professionalism. I hope his West Ham career will be a shining one."
Login to Quote

It wasn't a very busy transfer window for David Beckham, but it was indeed one for the Aston Villa Under-18s, who saw a couple of youngsters leave on loan. 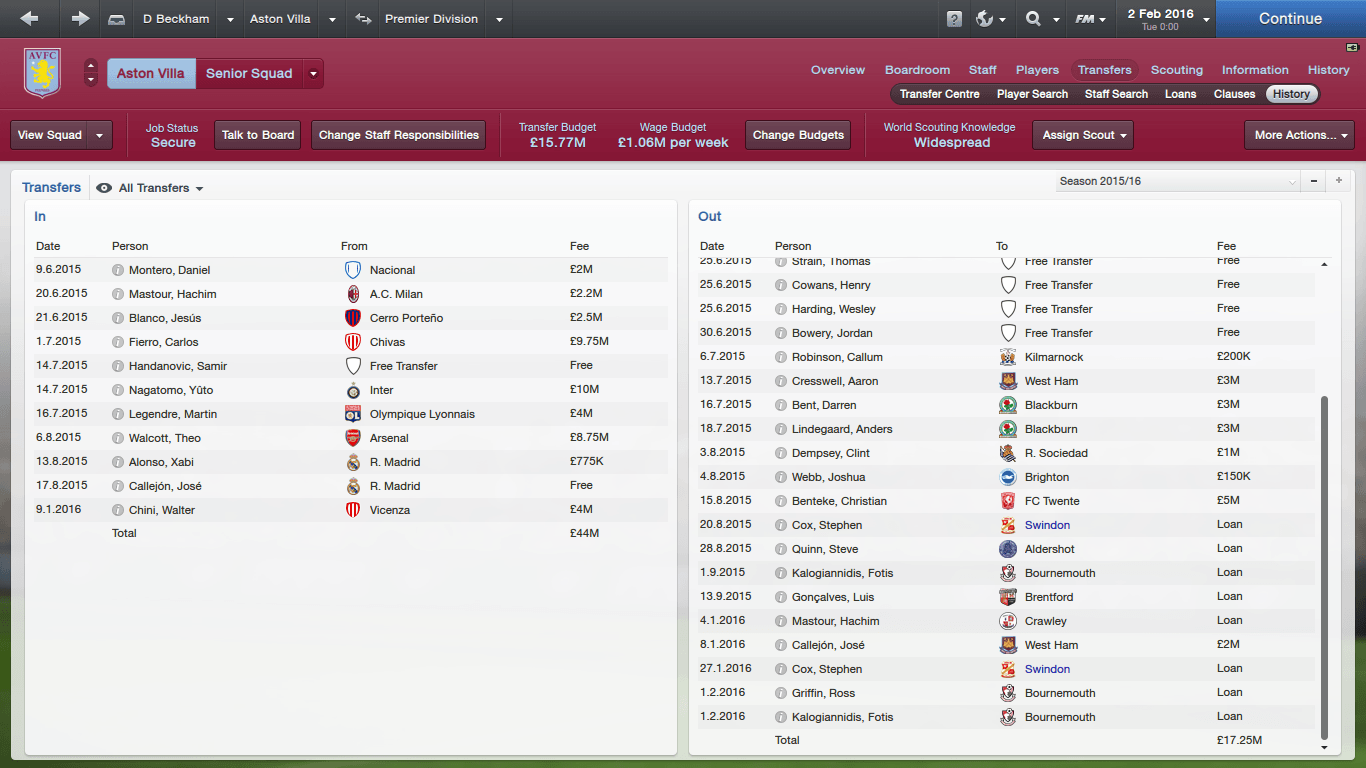 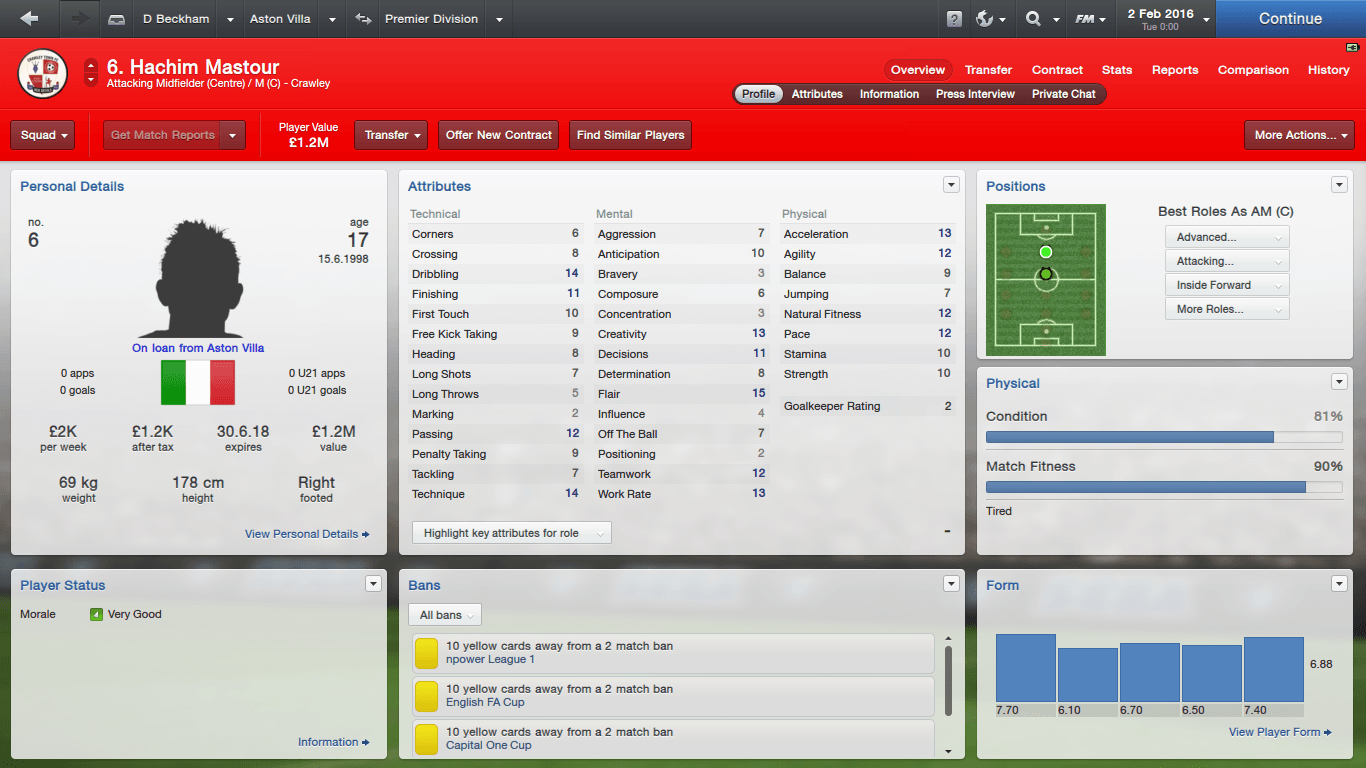 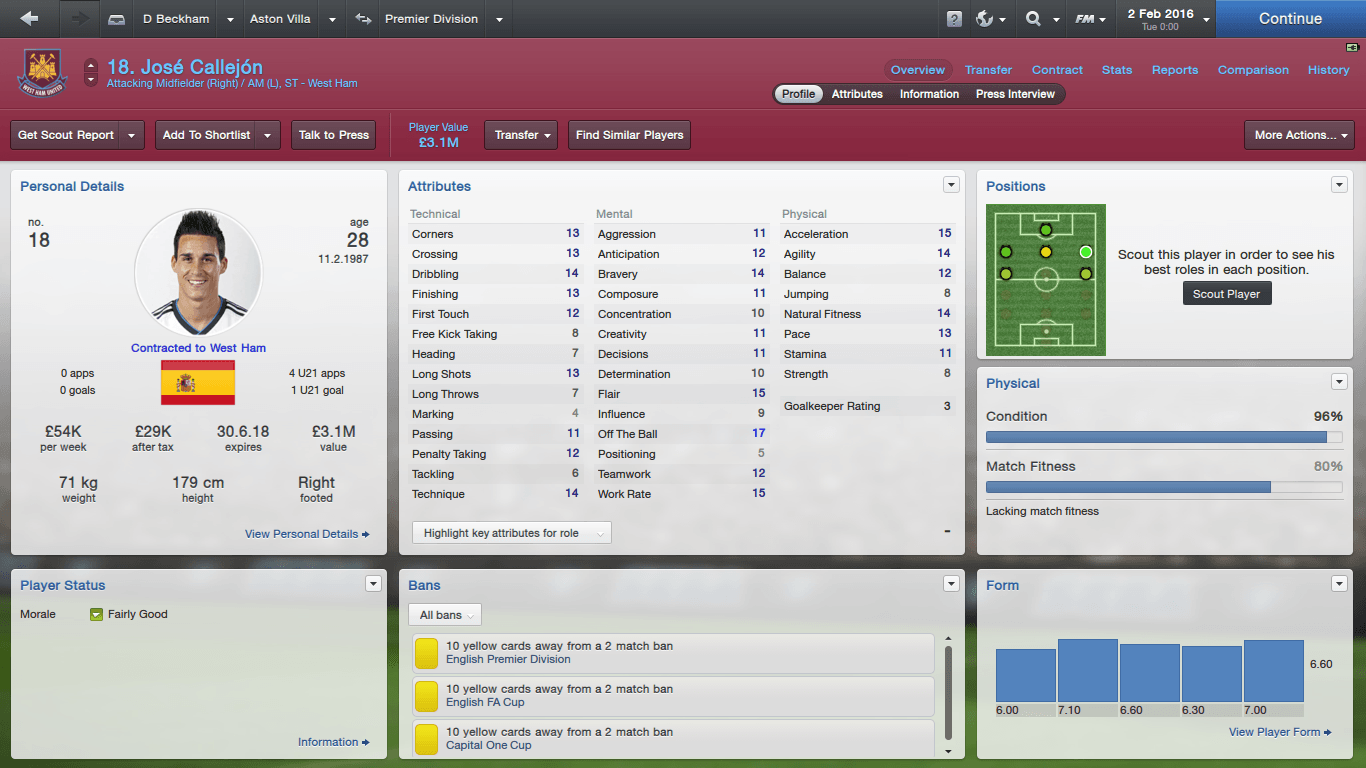 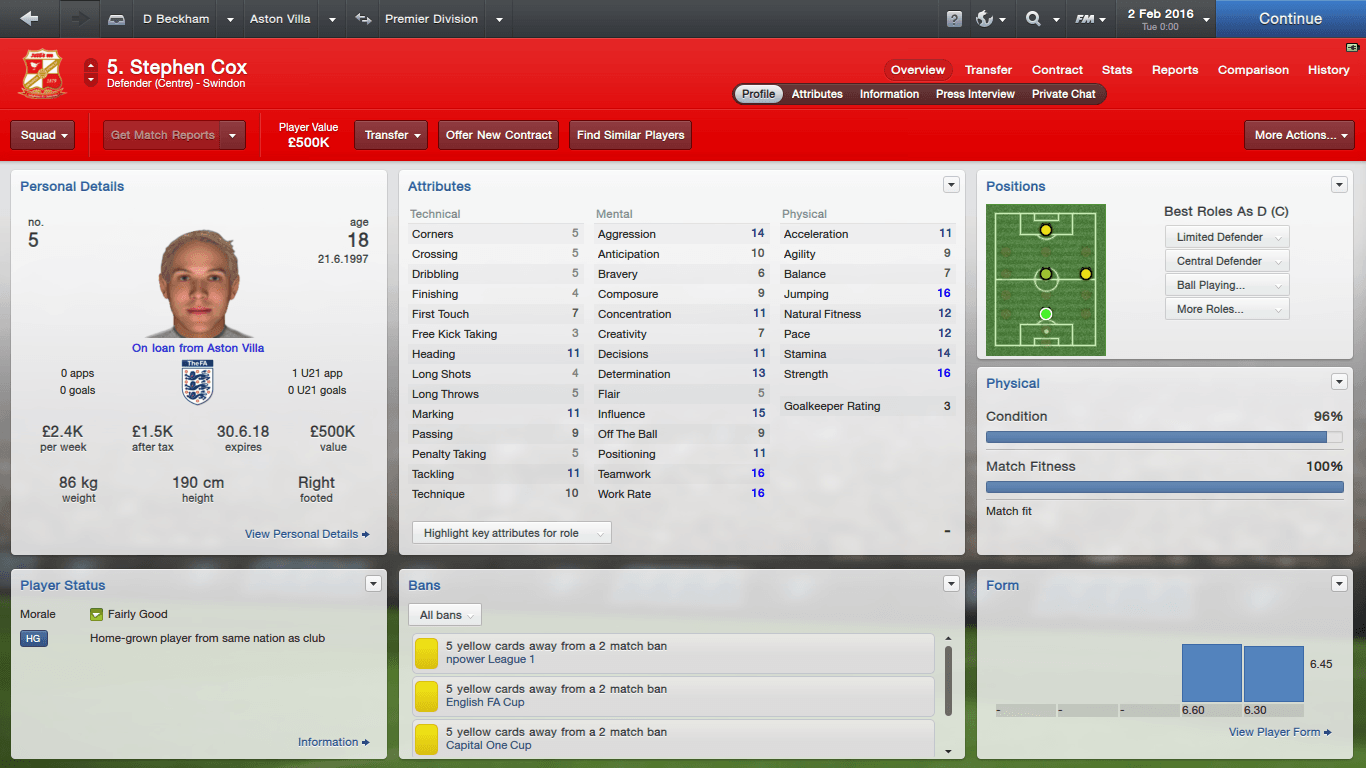 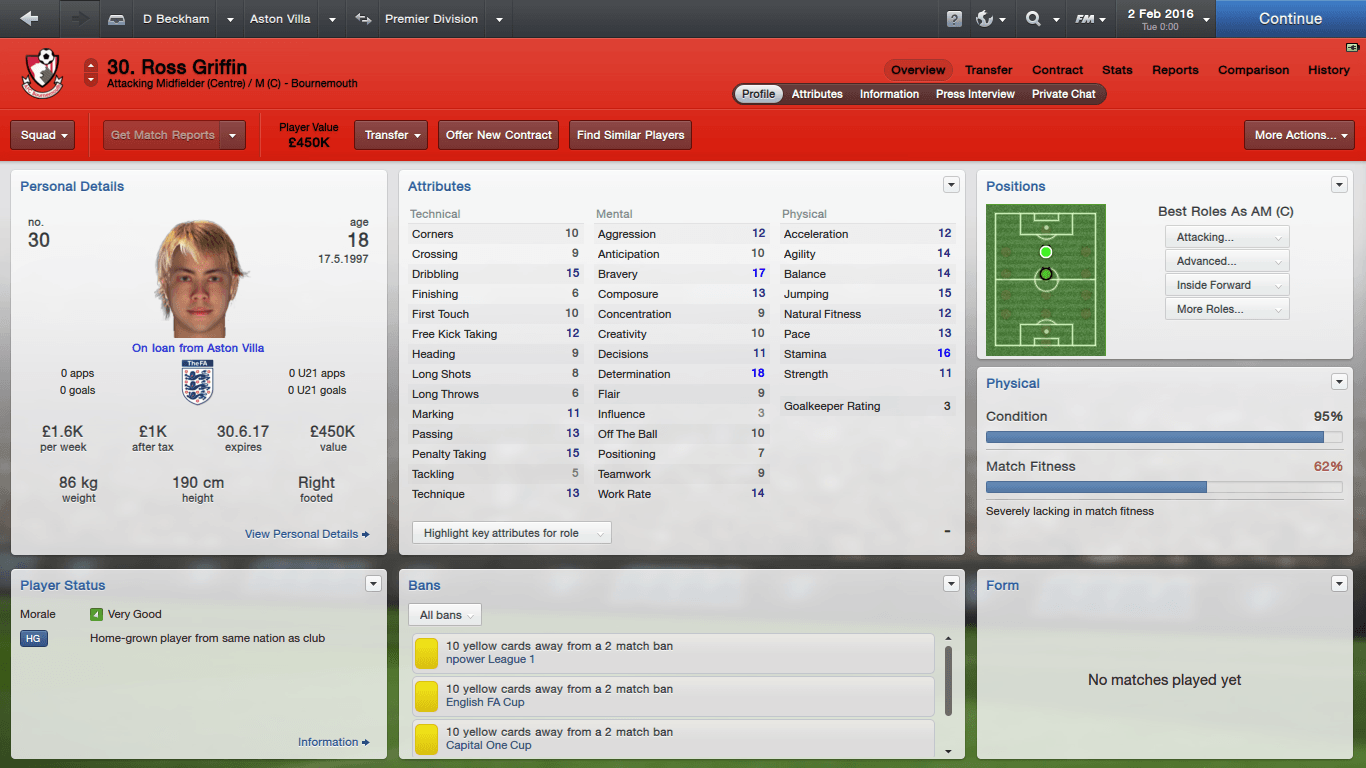 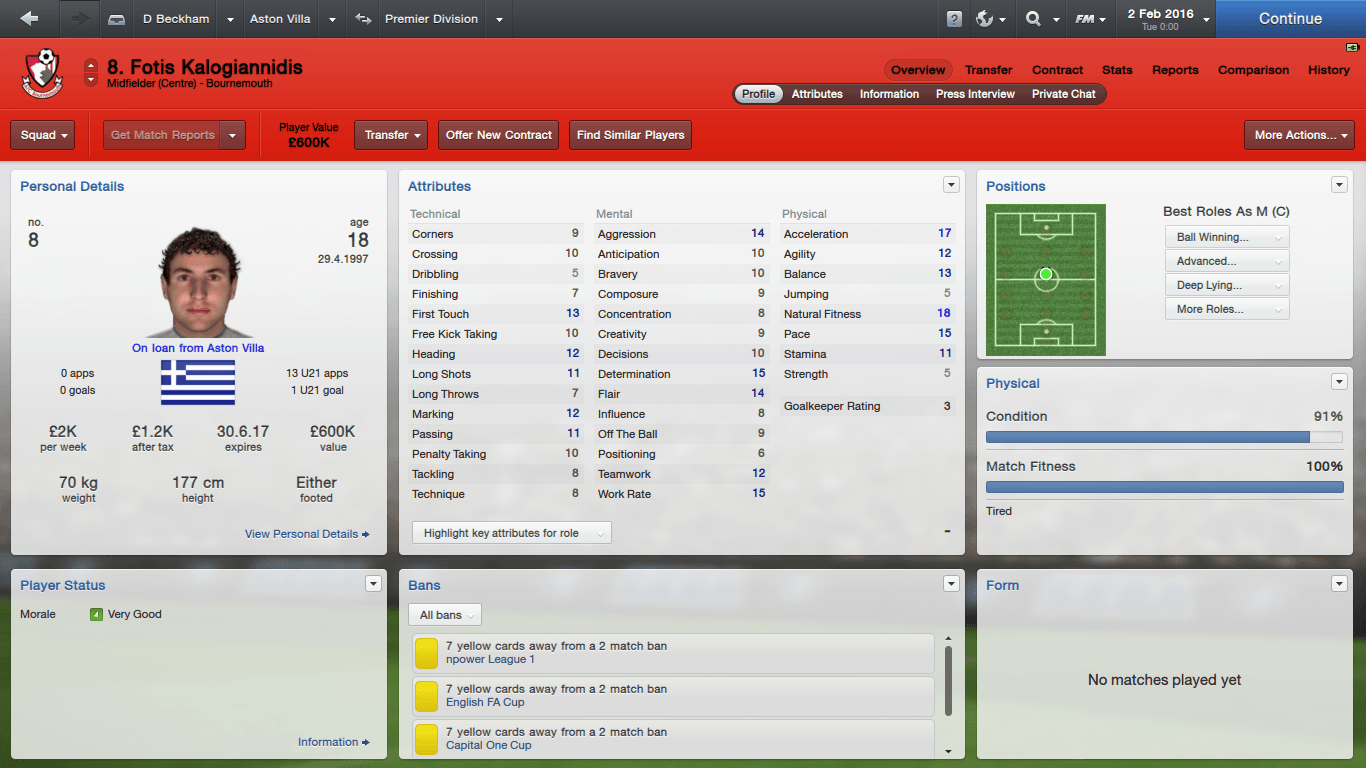 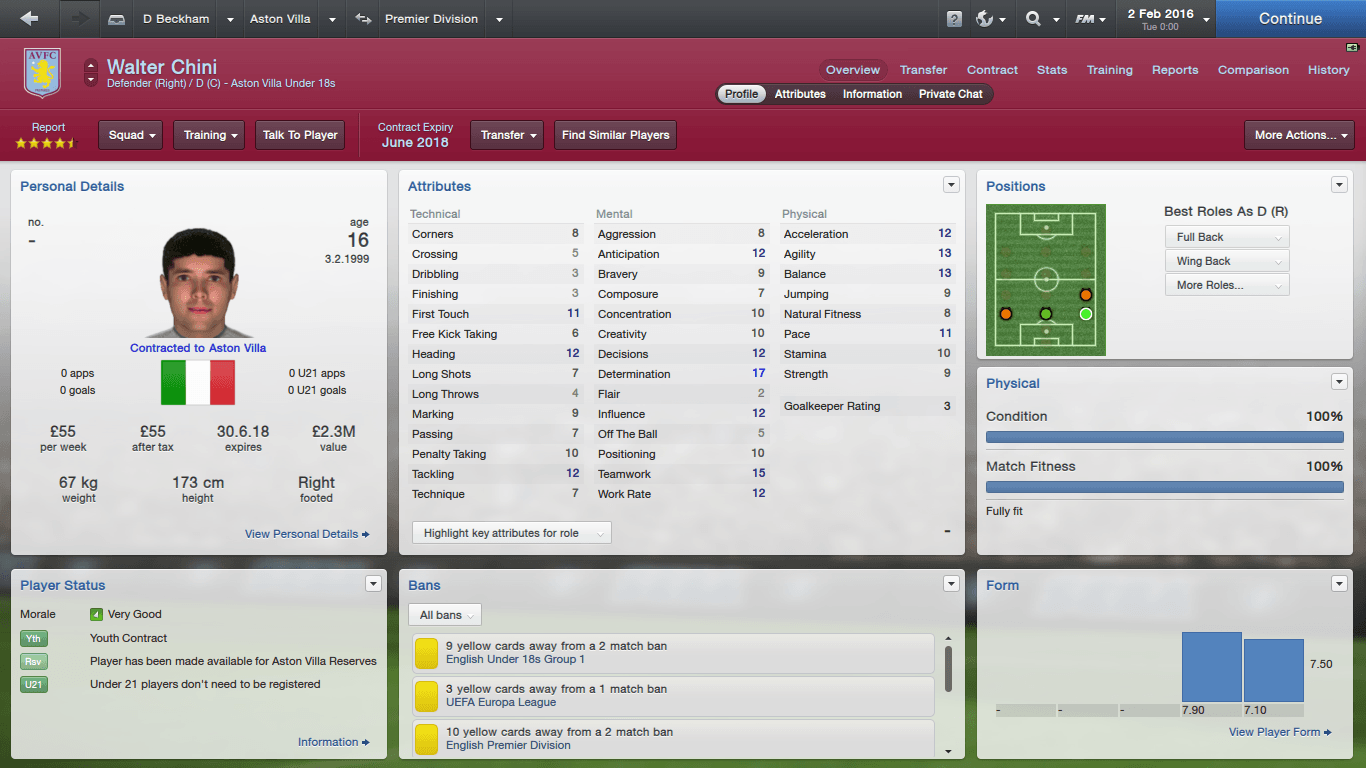