Glenn T
7 years • Edited
Hey guys, so I've just won the Story of the Month again, this time for June.

This is my fifth Story of the Month award won now and my fourth one won with David Beckham: From Hero to Zero but I am still as grateful for it as I have been since my first SotM win. It's brilliant that so many of you think my stories are great, as I got 27 votes out of the total of 69. I would like to thank everyone who voted, and the rest of the 42 voters who took part in the poll.

Thanks for the votes, the reads and the views. Plenty of people consider this the best story on FM Scout, but I think the readers who read and comment are more important than the story itself.

I would also like to shout out other stories that really deserved to win SotM this month, but unfortunately couldn't because I was also in the running.

-Vauxhall Motors - The Path to Power by Justice

-The Rise of the Nerazzuri - The Danish Invasion by neal09

Once again, thanks for everything, readers!

wellsy1498
7 years
Well done Glenn just carry this on for ever.

We all love this as much as we love our own.
1
Login to Quote

We all love this as much as we love our own.

In this next edition of Bayern's Next Superstar, we will be covering Bayern Munich's young Dutch goalie Arno Gerritsen.

The 18-year-old has embarked on what appears to be a promising international career, winning his first cap for Holland against Wales just recently. He is also the current first-choice keeper of the Holland Under-21s.

Gerritsen is also the front runner to replace the aging Manuel Neuer, now 34, along with fellow young goalie at the club, Seyhmus Seckin. With David Beckham looking to give the youths a chance to step up, either Seckin or Gerritsen could be handed a first-team role once Neuer decides to hang up his gloves. 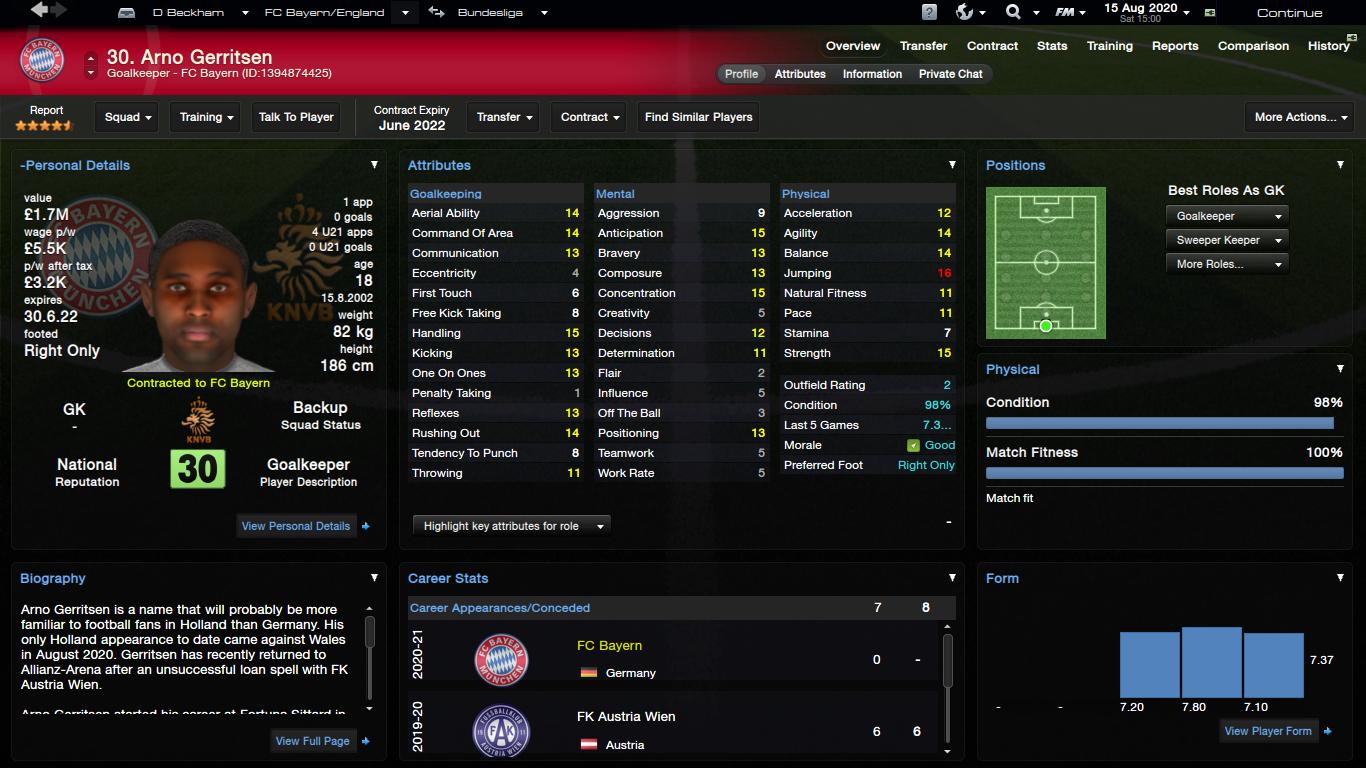 Starting his footballing career at various amateur teams in Holland, Gerritsen was eventually spotted by scouts and he was quickly on his way to professional football, linking up with Fortuna Sittard and playing regularly for the Jupiler League club's youth teams.

However, he was soon on the move again as Bayern Munich beat Fortuna Sittard to the race of offering the prospect a professional contract. Packing his bags for Germany, Gerritsen moved to Munich, where he began playing regularly for the Under-19s.

Soon, he was farmed out on loan. A loan spell to FK Austria Wien saw him play temporarily in the Austrian Bundesliga, and although serving as second-choice, Gerritsen still made an impression, making 6 league appearances and conceding 6 goals, while also keeping 2 clean sheets.

Fresh from his loan spell, Gerritsen is expected to play the role of second-choice again, but this time at Bayern Munich as backup to Neuer.

With Seckin seemingly certain to be going out on loan this season, Gerritsen will have to get acquainted with the Bayern Munich bench.

But with Neuer already 34, it might not be long before Gerritsen himself gets a bundle of playing time, but Seckin will definitely do all he can to beat Gerritsen to the first-choice spot, with the Turkey Under-21 international having put in some good performances last year when filling in for the injured Neuer.

Wherever his future lies, for now, it certainly looks bright.
Login to Quote

Jozef
7 years
Nice update Glenn and another one for the future.
Login to Quote

There's no end to the quality in depth. Congrats on SotM
Login to Quote

Justice
7 years
For an 18 yr old goalkeeper to break in to the national senior team is unbelievable, especially for Holland! He has another 10 years before he will hit his peak too which is fantastic, and at least another 10 years after that to continue playing at a top level!

Neal
7 years
Congrats on story of the month, thoroughly deserved mate, this story is top notch. Thanks for the little mention as well, means a lot

No no thank YOU for the awesome story man

CONGRATS ON ANOTHER WIN

And a nice update too

Glenn T
7 years
Thank you for all the great comments!

Arvind
7 years
He's a capped goalie at age 18..and that too for Netherlands! Very impressive, I think he might give Neuer a run for his money!
1
Login to Quote