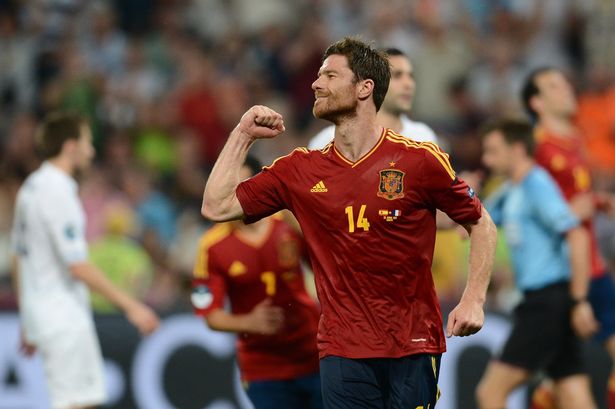 Xabi Alonso has made the move from Aston Villa to return to his native Spain, joining La Liga side Granada for a fee of 725k.

The 34-year-old joined Villa only last summer from Real Madrid but has failed to make much of an impact, only making 18 league appearances in a Villa kit.

Capped 110 times by Spain, Alonso failed to bring the form he had at Liverpool and Real Madrid to Aston Villa.

However, he is not the only one moving from Villa, with young goalkeeper Mattia Perrin shipped out to Swansea for a fee of 1.5 million. 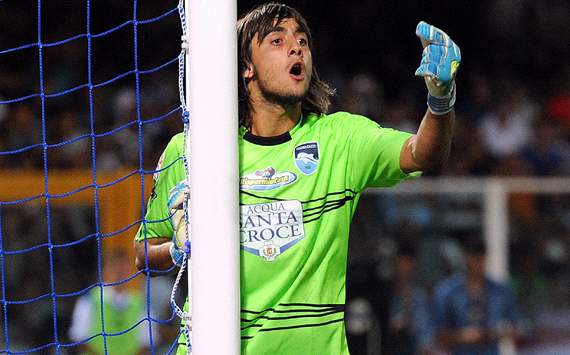 The 23-year-old joined on a free transfer from Genoa two summers ago but has been often used as backup at the club. In his two seasons with Villa, Perrin has made only 2 appearances in the Premier League. Once dubbed the next Gigi Buffon, the former Italy Under-21 international will have to get his career back on track with the Swans.

Villa manager David Beckham is expected to launch into a spending spree within the next few days, reportedly having been awarded more than 40 million for transfers by Randy Lerner after the club's ascension to glory with their capture of the Capital One Cup and Europa League double.
Login to Quote 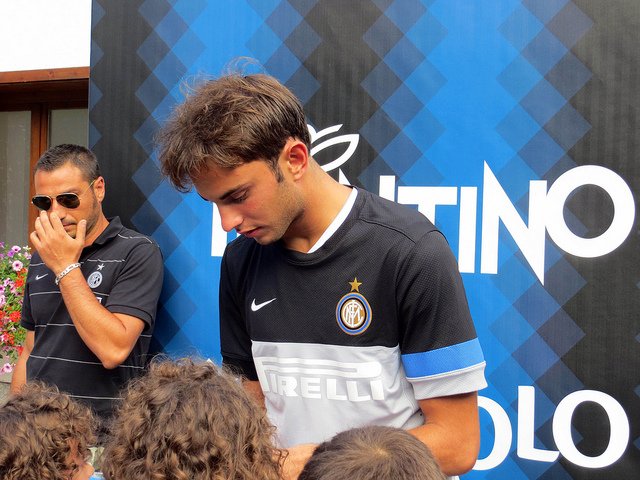 Aston Villa and David Beckham have spent a total of 24 million on transfers, and the spectacular thing is, it's not even August.

The Villans have done their transfers early with Beckham intending to strengthen the squad for their upcoming campaign.

"We want to finally have a shot at getting to the Champions' League this season," Beckham stated in June. "That's why we will need players. Good players, strong players, to help us with that."

Thus, a total of 24 million has been spent on five incoming players of different nationalities.

The first up is 24-year-old Italian keeper Francesco Bardi, who comes in right after the departure of his compatriot Mattia Perrin. Although he failed to make an appearance in the tournament, he was called up to the Italy squad for Euro 2016, demonstrating his potential to be one of Italy's best. Bardi comes in on a free transfer from Inter, after Villa approached him in January before the Milan side could persuade him to sign a new contract. Bardi will put increased pressure on Samir Handanovic and challenge for the number one. 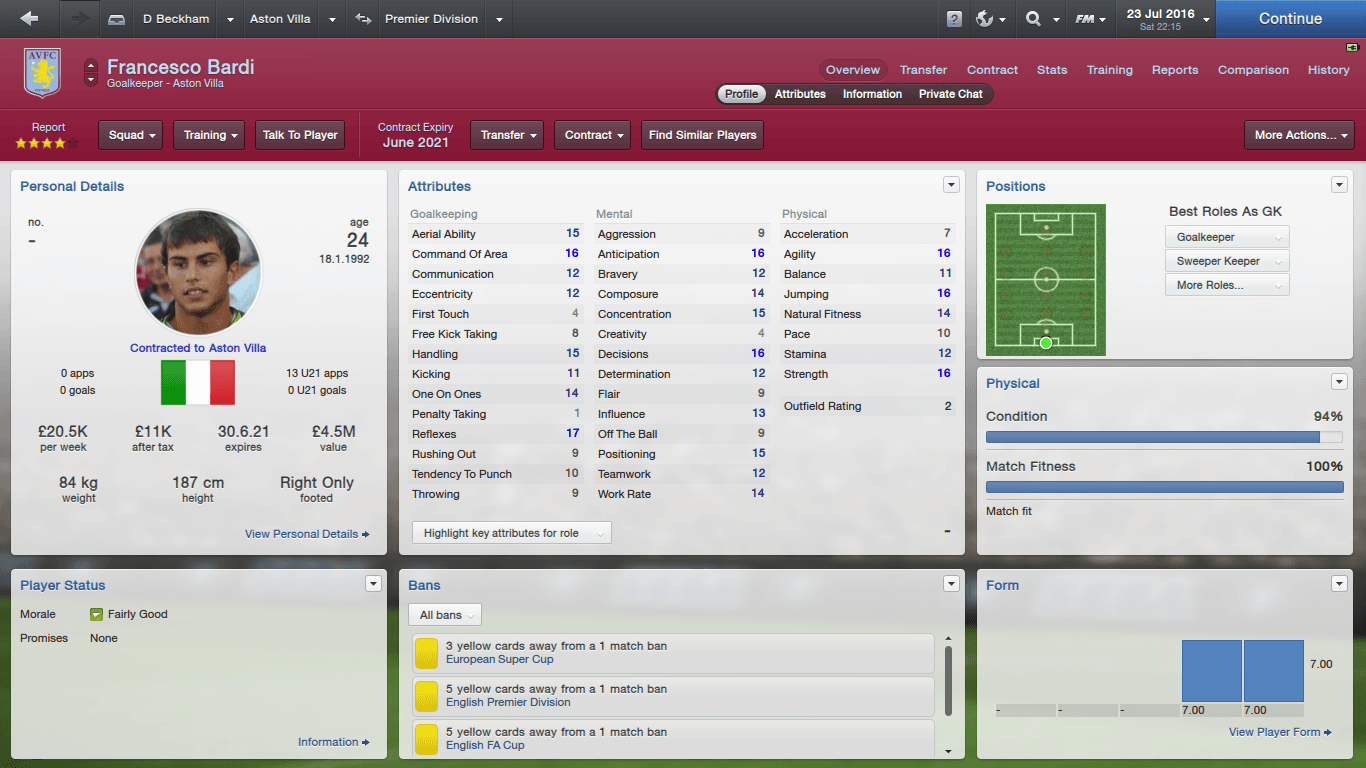 Next is another goalkeeper. 18-year-old Brazilian Nilson was first spotted by Aston Villa scouts two years ago and has finally made the move to the big time, joining from Brazilian Second Division side Sao Caetano for 300k. A talented young man, he is expected to make a quick ascend to the senior squad. 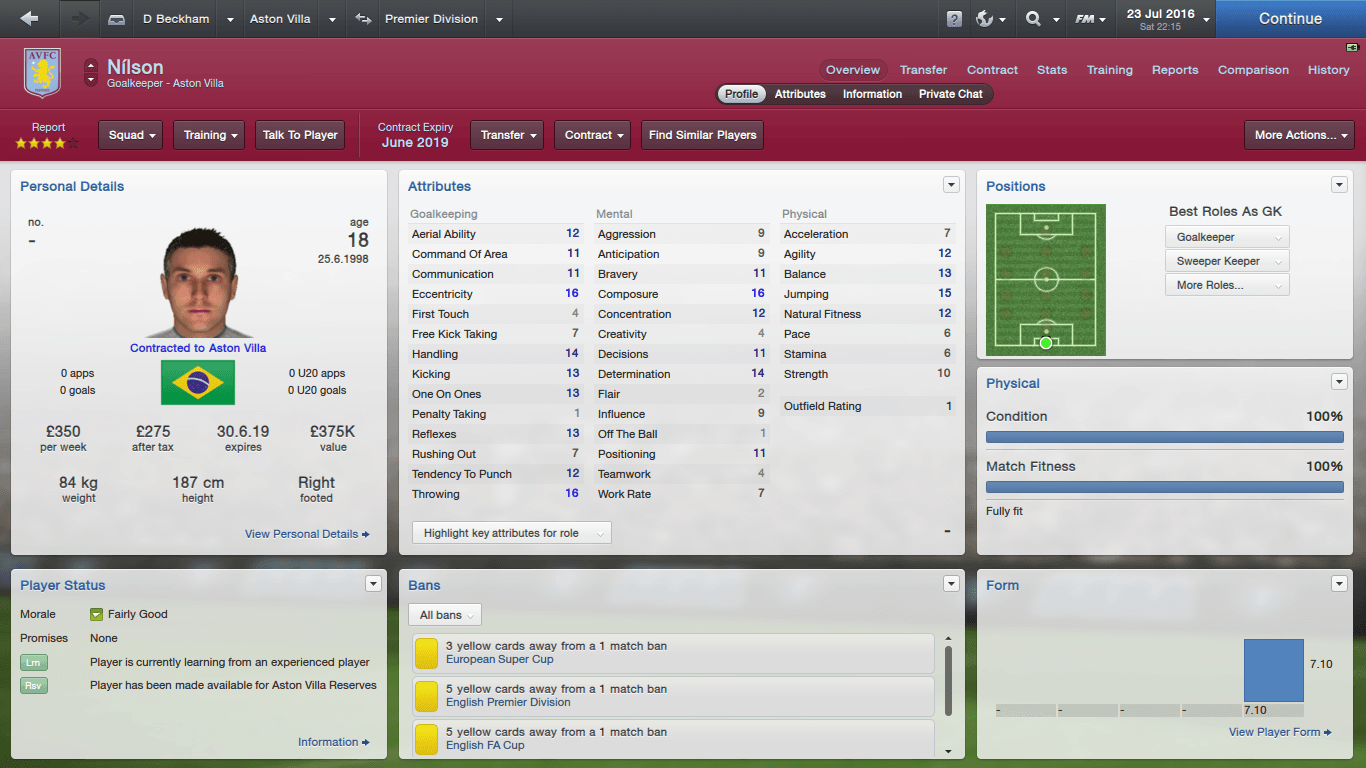 Another youngster, 16-year-old Belgian Jean-Luc Laurent joins from Mouscron-Peruwelz in the Belgian Second League, for a fee of 220k. The attacking midfielder will slot straight into the Under-18s side and is expected to become a big hit in the next couple of years. 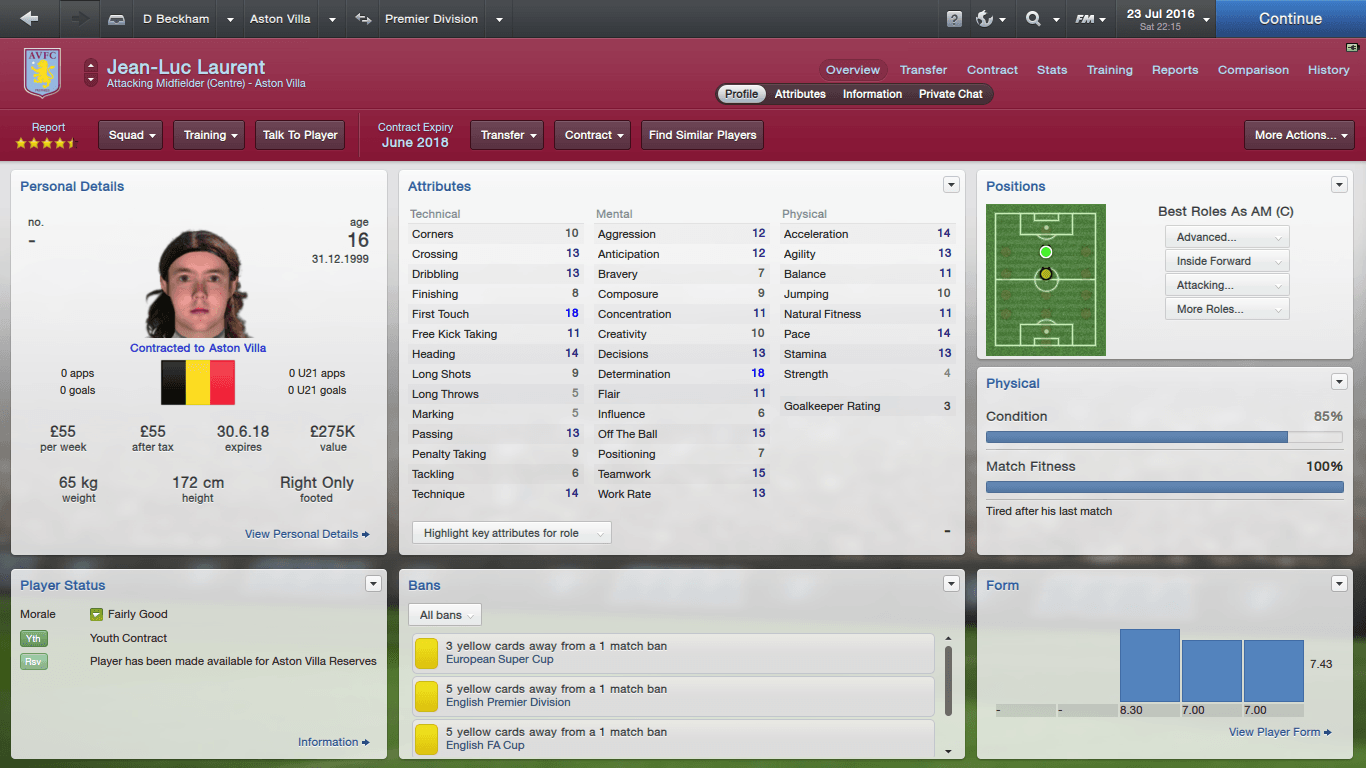 Marilia, or Fabio Henrique de Oliveira Alves, has joined from Corinthians. The 18-year-old Brazilian was starting to make his breakthrough into the first-team when Beckham was alerted by Villa scouts to the talent of the defensive midfielder at the end of the season. Activating his hefty release clause of 10.75 million, Marilia is expected to start out as a rotation player at Villa Park, although with his versatility and ability to play in a number of roles, it remains to be seen where Beckham will primarily play the natural midfielder in. 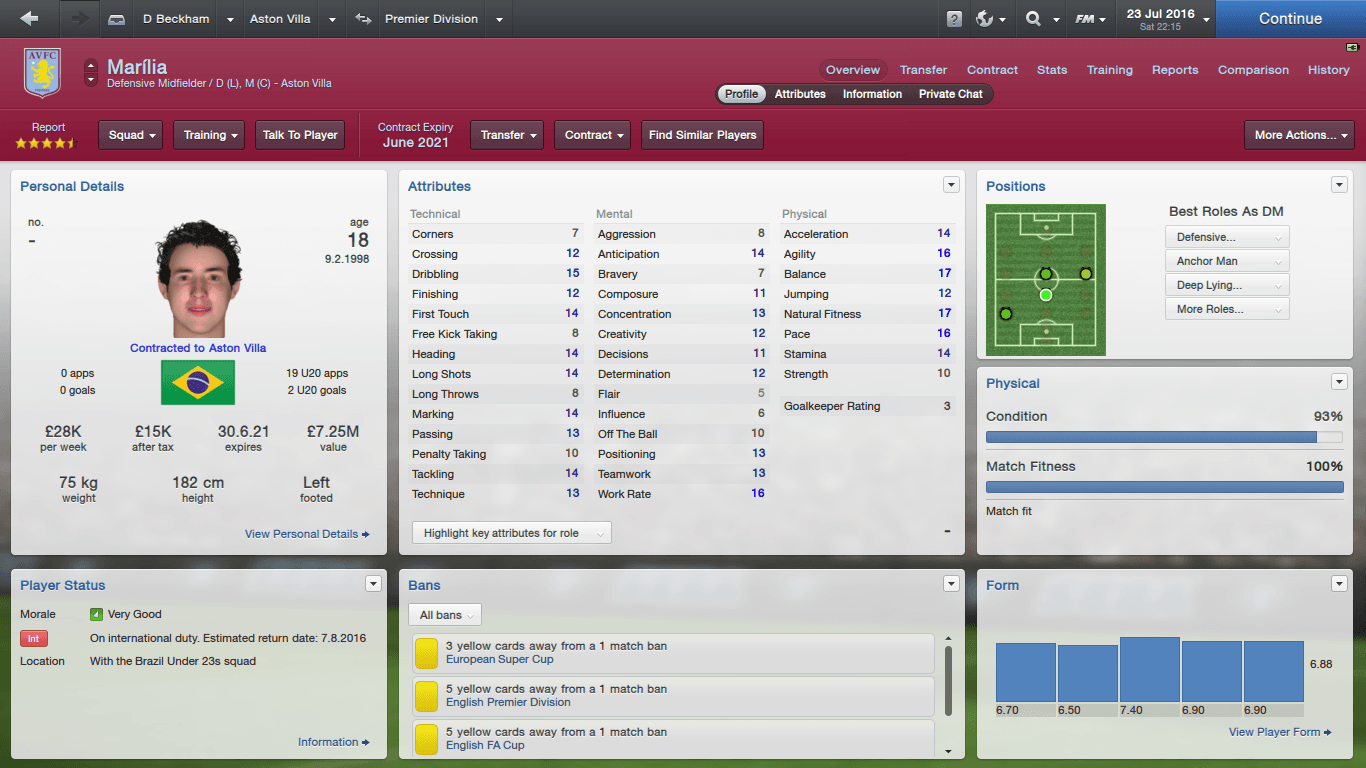 However, the biggest signing out of the five is Turkish winger Gokmen Hacieyupoglu. The 21-year-old Turkey international almost joined Aston Villa three years ago but failed to due to work permit issues. Fast forward and he is now an established first-team player for Galatasaray. With Manchester United reportedly interested in him, Aston Villa have moved fast, with Beckham coughing up his release clause of 13 million to see the youngster finally arrive at Villa Park. He is expected to be first-choice on the right wing, and this will undoubtedly raise questions over the future of Theo Walcott at Villa. 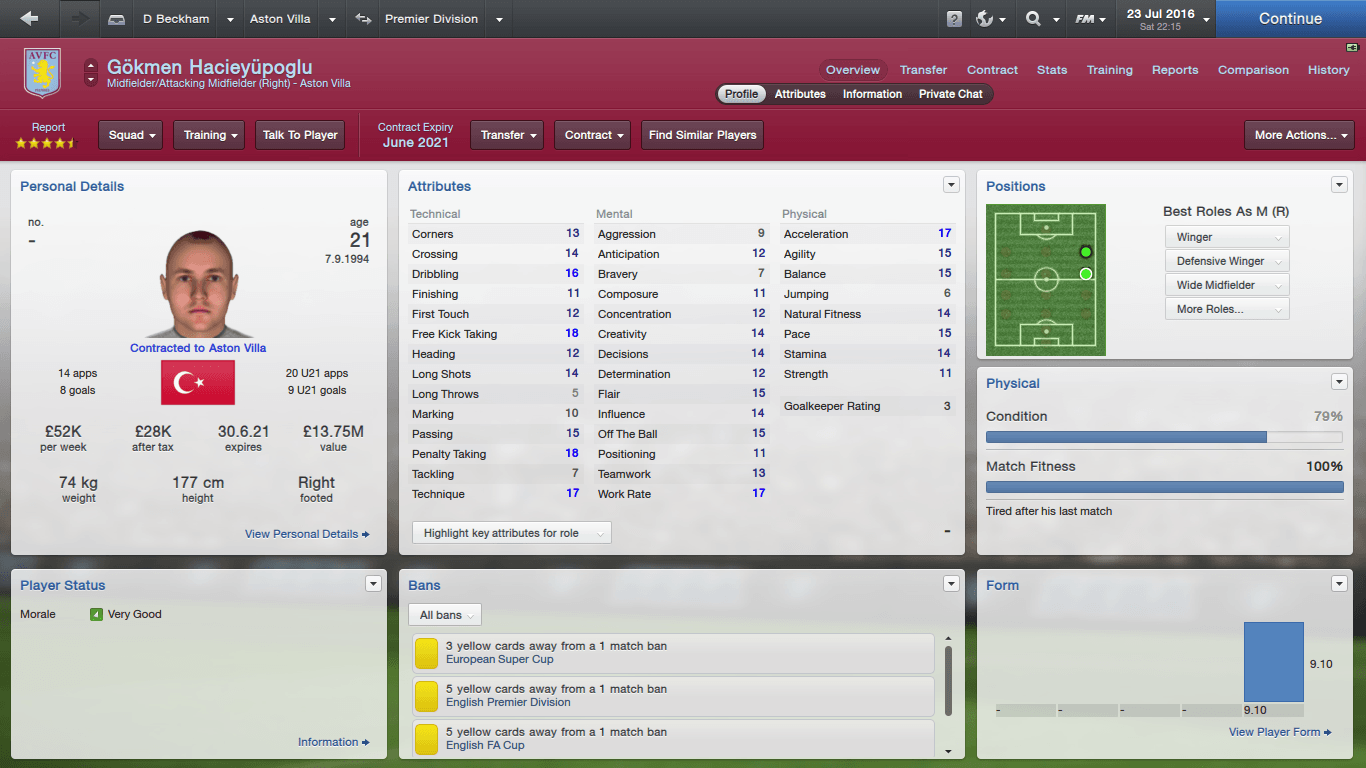 Deleted
8 years
That Turk as a awesome name.
Login to Quote

Glenn T
8 years
Thanks for the comments guys. Yes, thanks to my scouts, my regens are all pretty freaking awesome

It was a good pre-season for David Beckham and Aston Villa as they traveled to various countries like France, Israel, Spain and Argentina to play their pre-season friendlies. The highlight of pre-season is surely a 3-1 toppling of Real Madrid. 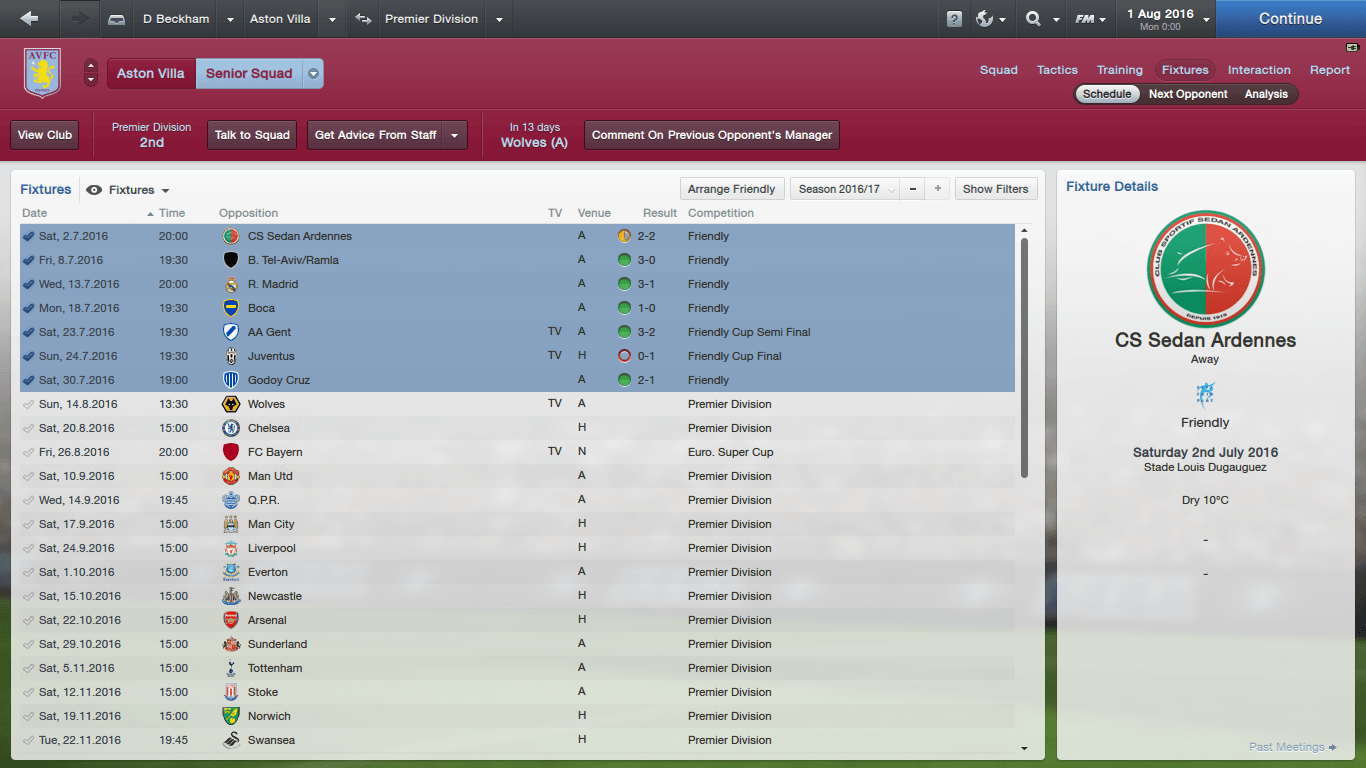 Jer
8 years
Nice win against Real Madrid! Were they playing a full equipped side?
Login to Quote 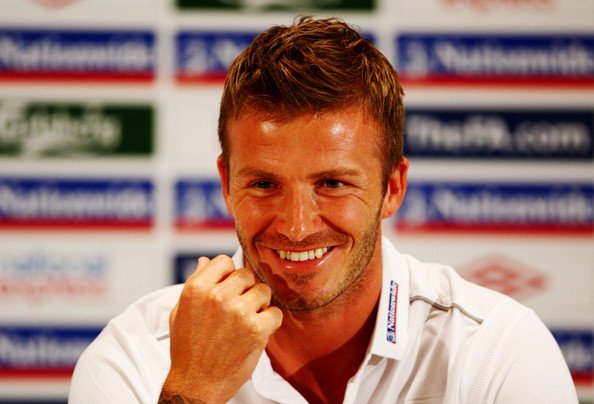 Aston Villa boss David Beckham has heaped praise on his Reserves and Under-18s side, as well as confirming that more youngsters in the club's youth teams will be given run-outs in the senior team this season.

Youngsters like Jack Grealish and Andrew Black are some of the recent ones that have been given a chance in the senior team after playing well in the youth teams. 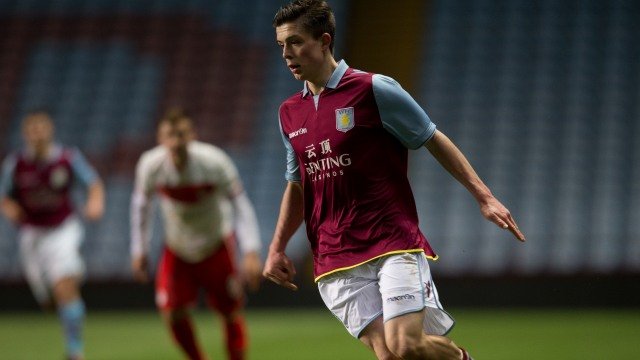 Beckham has invested in youth throughout his years as Villa manager, and has also took the time to revamp the club's youth teams. Most of the youth players associated with the Villans currently were brought in by Beckham.

"Youth is key. They are the next generation of football, that's what I like to think," Beckham told Aston Villa TV.

"We are always looking into our Reserves and Under-18s because we want to give as many youngsters as many chances as we can.

When asked about them, Beckham praised their ability. "We are always looking to build from young and they are some of our most talented 18 and 19-year-olds, so of course if there's a slot in the first team, I will be looking to put them there."
Login to Quote

Jer
8 years
Some examples are also Campbell, who had a great season under Beckham last season! Great stuff! I like to have some oldies for the experience and tutoring as well! A little bit of both worlds - Miley Cyrus. Lol

2013-04-06 12:23#90230 PaukerJ : Some examples are also Campbell, who had a great season under Beckham last season! Great stuff! I like to have some oldies for the experience and tutoring as well! A little bit of both worlds - Miley Cyrus. Lol

Forgot all about good old Adam 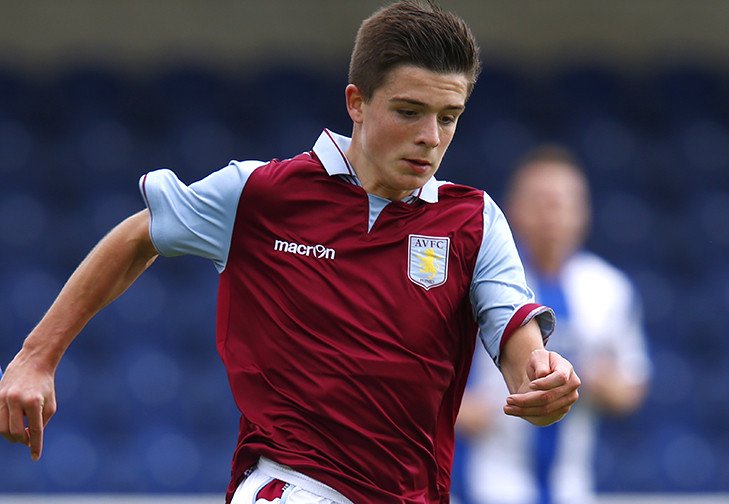 Aston Villa winger Jack Grealish has called for manager David Beckham to play him more often, and has hinted at the possibility of leaving for a new club if his career at Villa Park begins to stagnate.

The 20-year-old is currently an England Under-21 international and is tipped to be the next star at Aston Villa, but his first-team opportunities have been constantly blocked by the brilliance of Wellington Nem.

"I think I'm good enough," Grealish said, in an interview with the Guardian. "I'm seriously not boasting about it or anything, but the boss has been talking about it in training, how I'll be given a chance and all. But Wellington has been so good in my position and I honestly can't see how I can dislodge him.

"I love Villa but I don't want to stay as a backup player for the rest of my football career."

Since joining the Villa academy, Grealish has been steadily progressing up the ranks of the club and finally made his first-team appearance two years ago under Beckham, and since then, has made 39 league appearances in a Villa shirt, scoring 3 goals and notching 5 assists.

He is also highly admired by England Under-21 manager Keith Curle, having already won 16 caps for the Under-21s side and scoring 4 goals after switching his allegiance from Ireland shortly after his debut for Villa.
Login to Quote

It is terribly late but I have just only remembered about this.

THANK YOU ALL who voted for my story in the March poll.

Thus, I have won my THIRD Story of the Month award, also my first consecutive SotM, as well as David Beckham: From Hero to Zero's SECOND SotM.

Once again, a huge THANK YOU to everyone who has read and supported so far, and one more THANK YOU to the people who voted for me in the March poll.

UP THE VILLANS!
Login to Quote