Rare to hear that from a United fan

Would have kept him but he would be getting 0 apps per season, don't think it's fair to him, even if it is a computer game

Aston Villa have submitted their squad list for the Premier League 2016/17.

September: On the Run

Aston Villa are on an unbeaten Premier League run and have successfully extended that run to the month of October. A fantastic September for Villa and hopefully for them they can stretch that form over to October. 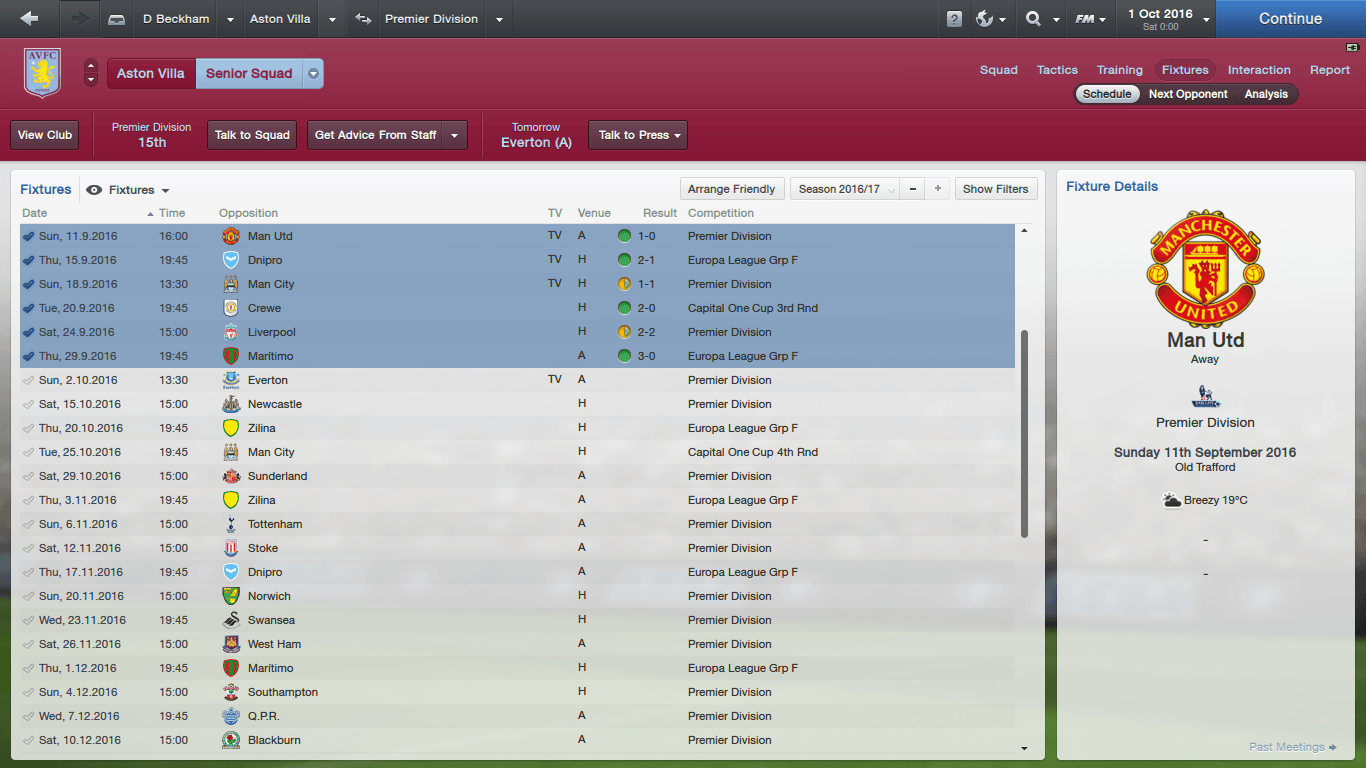 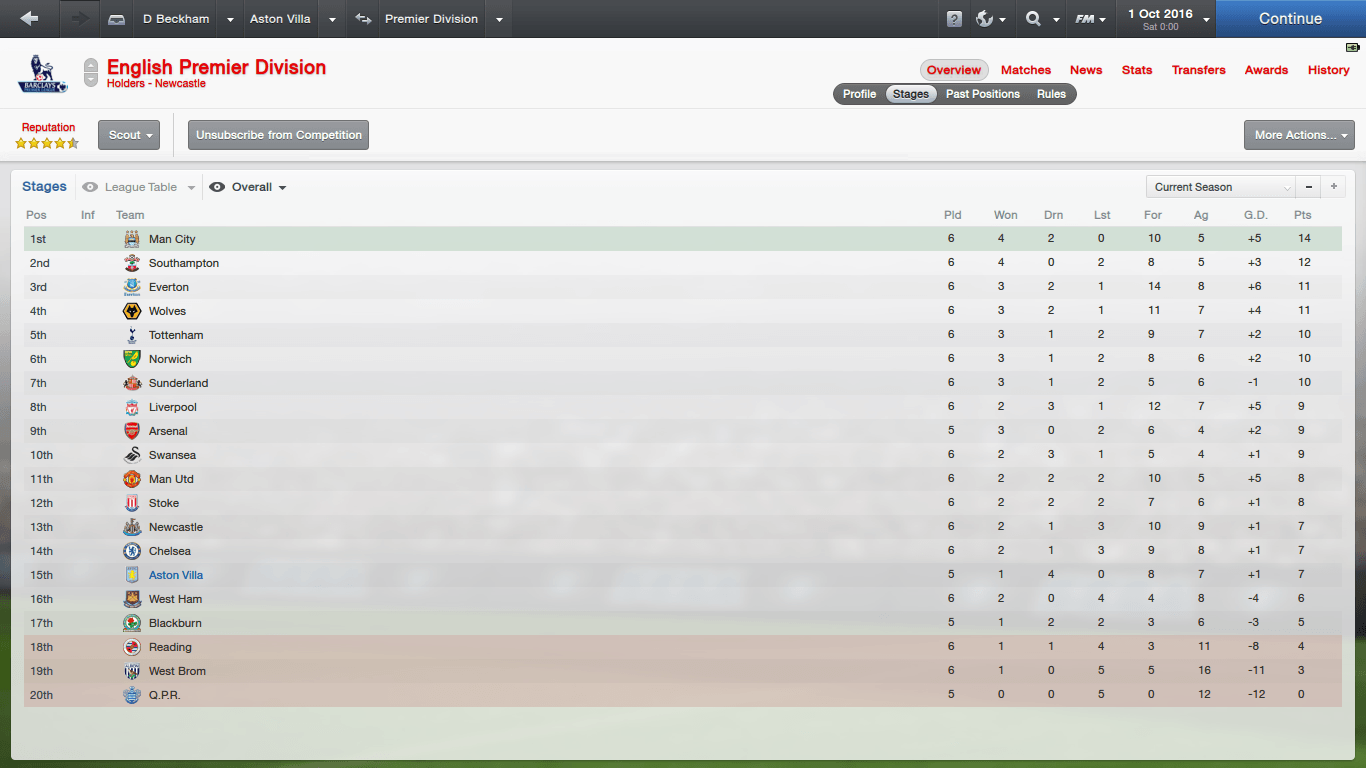 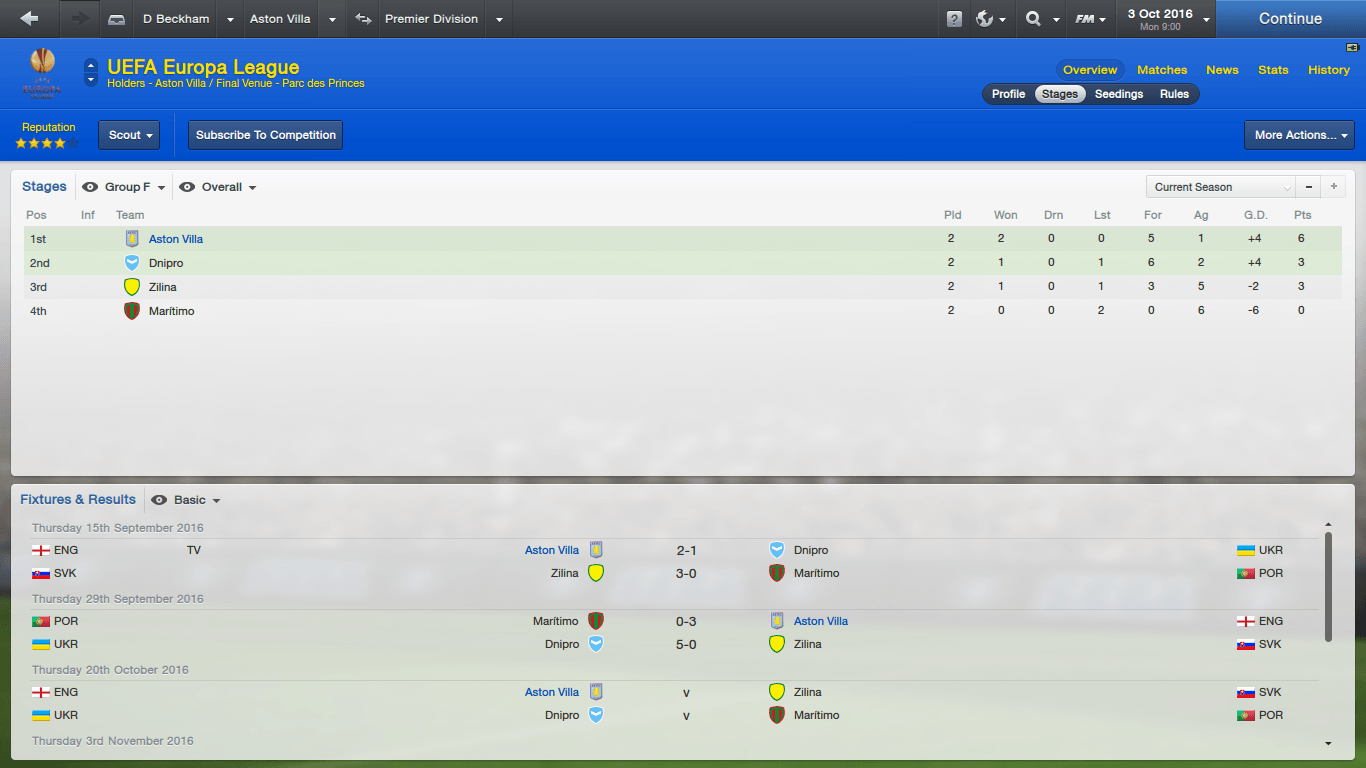 An Aston Villa player has won the Young Player of the Month award again and this time it is Colombian youngster and international John Romero. Jesus Blanco is not far off in 3rd place. 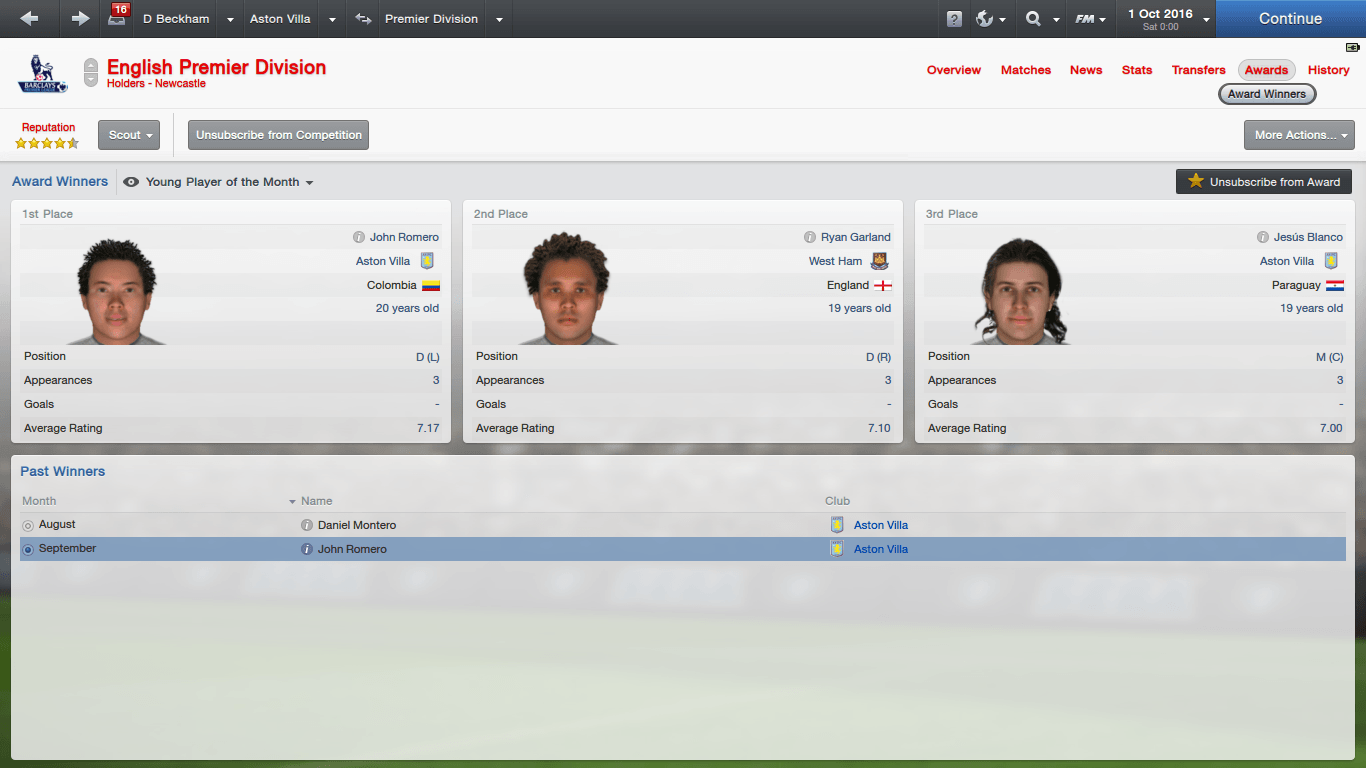 Joe
8 years
Nice update mate, might start using your format for my updates if that's alright? Nice win over United

Meet the youngest player who is undisputed first-choice at his position in the Premier League. John Romero has been a sensation since joining Aston Villa from Tolima in his hometown back in Colombia. But how exactly did this 20-year-old move up the ranks of the Villans? 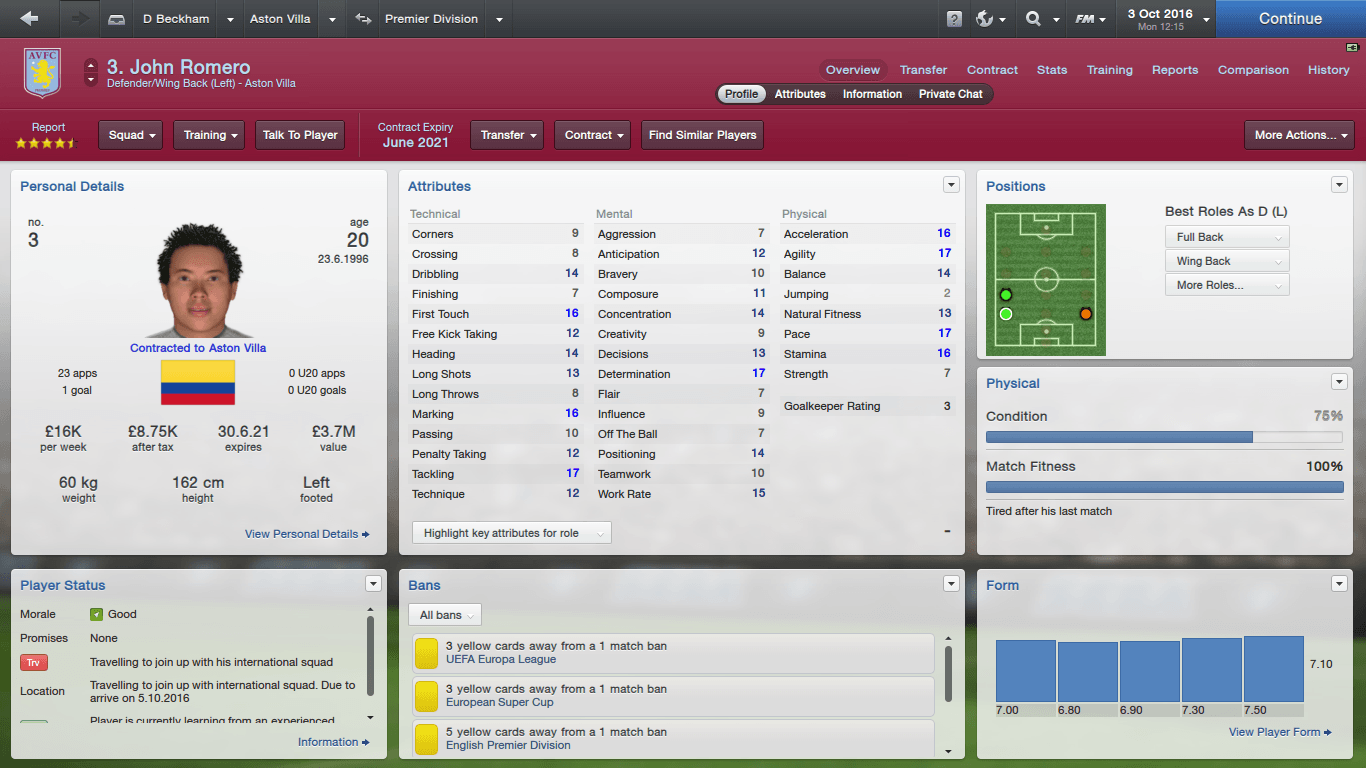 Romero has played football for a long time, and started his career in the academy at Tolima, eventually being promoted to the first team in 2013 and breaking into the first team by 2014, making 17 appearances in the Colombian First Division and silencing opposing wingers. His impressive performances even led to him being awarded his first international cap for the Colombia senior team in March 2014.

Not many Premier League scouts look in the South American country of Colombia, but Aston Villa chief scout Renatinho just happened to be at the right place at the right time.

Informed of this young lad from Colombia's prowess at left-back, as well as his first-team experience of battling the opposition wingers with Tolima, David Beckham moved in and Romero was eventually a Villa player for 975k.

Arriving in the summer of 2014 at the tender age of 18, Romero did not expect to make much of an impact on the upcoming Premier League season. However, he was quickly thrown into the first team by Beckham, as backup to Aaron Cresswell at left-back. To everyone's surprise, Cresswell was quickly being overthrown as Romero marked his spot in the first-team, making 23 league appearances in his debut Villa season and helping the team to the FA Cup as well as the Capital One Cup Final.

Cresswell was sent packing to West Ham the season after, signaling the promotion of Romero to first-choice. Unfortunately, his season was ravaged by injury, although he still managed to make a total of 22 appearances in the Premier League. The Colombian teenager was also entrusted with a spot in the starting eleven in both the Capital One Cup Final and the Europa League Final. Romero soon celebrated his first double with Aston Villa.

On to the new season, Romero will be hoping this year stays injury-free for him as he looks to continue building on his already successful Villa career.

At the age of 20, Romero has won the Capital One Cup, the FA Cup, and the Europa League with Aston Villa - a remarkable achievement.

Outside of Villa and English football, Romero is highly favored by Colombia boss Eduardo Lara. Despite his tender age, Romero already has 23 caps for Colombia, as well as one international goal, a flyer from a distance against Qatar in the summer of 2016, two years after his international debut.
Login to Quote

No problem with that at all

Go ahead!
Login to Quote

No problem with that at all 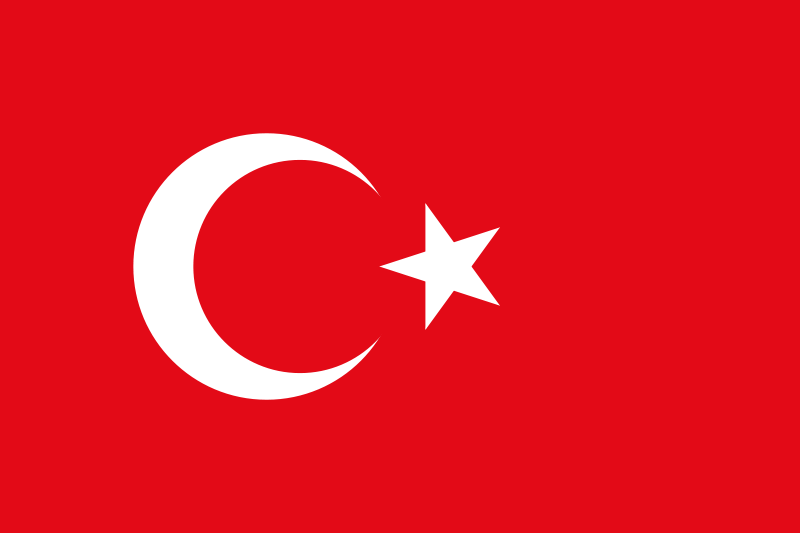 Aston Villa have confirmed that winger Gokmen Hacieyupoglu has taken leave from club duty to return to Turkey, due to "personal problems".

The rumor spreading in the press are that the 22-year-old, purchased from Galatasaray in the summer for 13 million, is incredibly homesick.

This is the reported conversation that went down between Villa manager David Beckham and Hacieyupoglu, with Beckham kindly granting the Turkish international his leave. 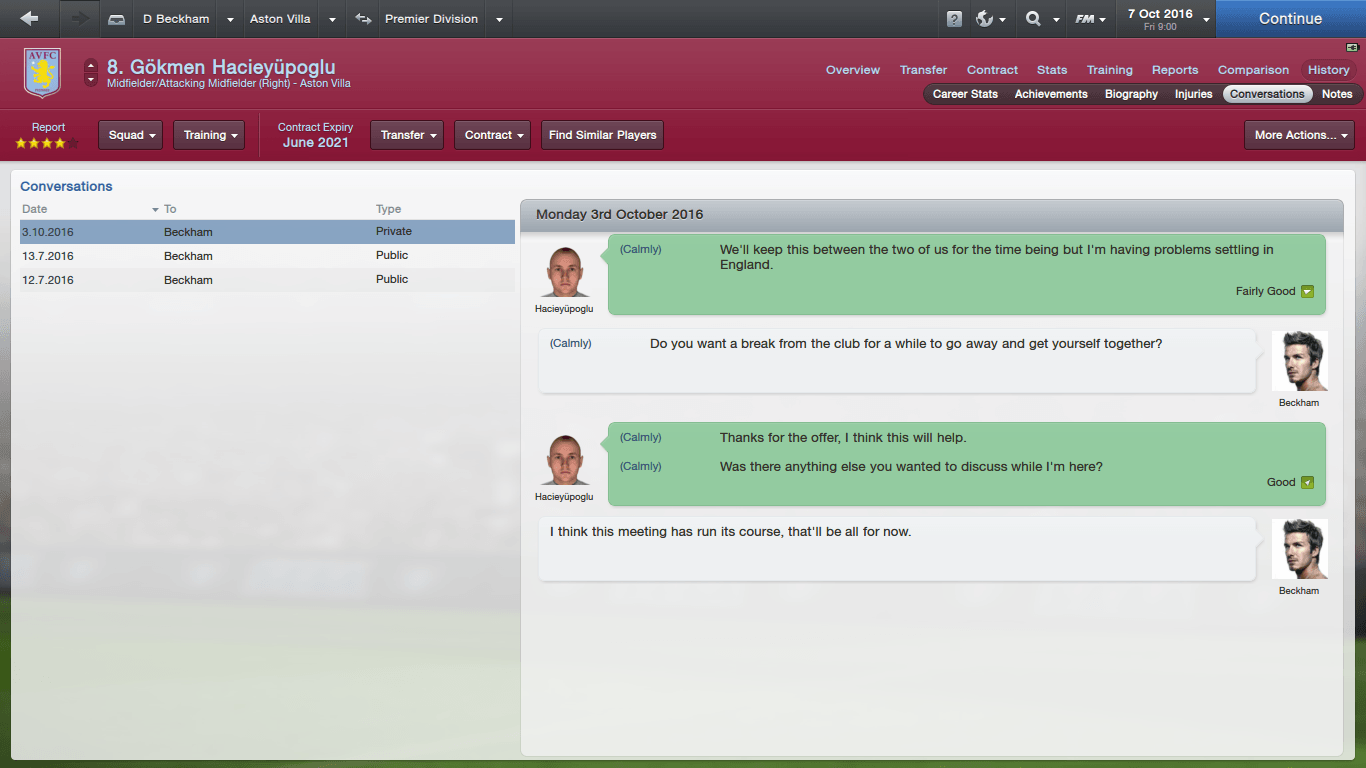 Villa have refused to comment any further on the situation regarding Hacieyupoglu.

The club's number 8 is first-choice on the right wing and his temporary departure will probably not benefit the club in any way.

However, Beckham revealed to the media that "he just needs to sort out something and will be back soon".
Login to Quote

Joe
8 years
Unlucky...there is always one who gets homesick

Akash
8 years
Hope Romero finds his Juliet at Aston Villa. (See what I did there?)
1
Login to Quote

Thanks Inqui, means a lot!

Kane
8 years
Romero seems like a brilliant player, and what a bargain! You never know, you could have the next Falcao. Or Atletico Madrid may have the next Romero, as he's already better!

Gutted about Hacieyupoglu, seemed like a top player, and for that money too! Hopefully he gets over it and becomes a whizz again.

Some brilliant updates as well Glenn, keep it up!
Login to Quote

Gutted about Hacieyupoglu, seemed like a top player, and for that money too! Hopefully he gets over it and becomes a whizz again.

Some brilliant updates as well Glenn, keep it up!