Keep it up, my Liverpudlian friend.
Login to Quote


Having already secured our place in the league for next season, our final set of results were not too important but I still wanted to get as many points as possible. Hopefully we could put a nice run together to end a season of ups and downs.

We didn't perform too badly, winning two and drawing one. It is a shame that we didn't win either of our last two games at Rivacre Park but maybe that is a sign that changing venue to the soon-to-be-built Vauxhall Stadium will be a good thing. Tom Hannigan and Michael Wilde were our key performers and we looked ok in attack. Hopefully we can improve our defence for next season as we will aim higher than ever. 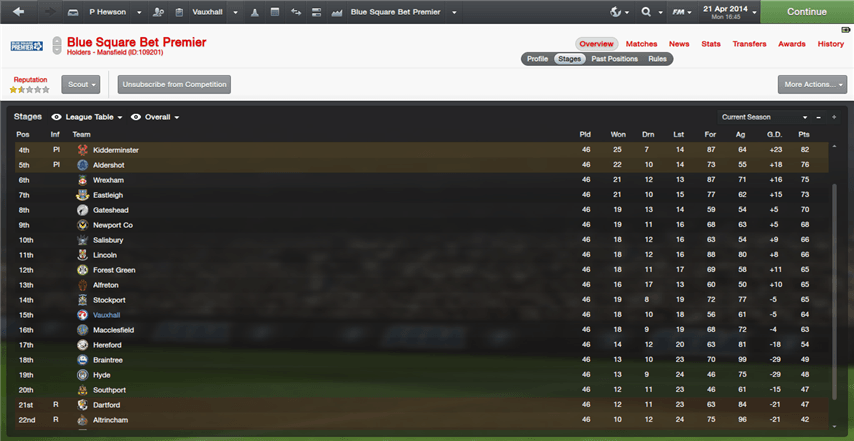 This is how the league looks around us at the end of the season. We finish in a very respectable 15th place. I will show a full table in my end of season report.

Firstly, I apologise for the lack of fiction this season but I have struggled to find enough time to do so. Next season will be much more different and hopefully much more exciting for you readers. My next two posts will be a season review and analysis from Paul Hewson (Bono).

Blue
9 years
Didn't turn out to be a fantastic season in the end, but it'll be better next year


Another season has passed and it is time to write up another end of season report/review. I hope that you have enjoyed this story so far and I am also very grateful to have this story nominated for the Story of the Month award.

As you can see, we were very poor in our first twenty games, where our record was 3-6-11. We struggled to adapt to the league and our results showed that. The record for our remaining twenty-six games was 15-4-7. This was when were using a different tactic (4-4-2) and we played balanced football. I have learned my lesson now and I will not try to dominate teams that are better than us any more.

We finished in fifteenth which is much higher than we expected to finish and I am very happy with that. Hopefully we can push on for next season and reach higher heights.


This is the "Cup of Dreams" and one that I always like to play in.

Rochdale proved to be our bane as they demolished us in the first round. I am not too disappointed but I was hoping to go further. 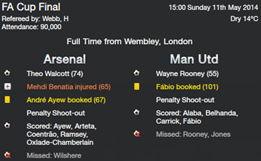 Arsenal pipped Man Utd to the trophy. Hopefully we can one day have our name engraved on the most coveted domestic cup in the world.


I saw the FA Trophy is a winnable competition. I was hoping to go far in to it, with an eye on possibly snatching it.

I was disappointed with how we did in this competition. I did not plan on going out this early.

Plymouth won the trophy, as expected. It is nice to know that the team we lost to did get to the final.

My next update will be a press-conference with Bono. 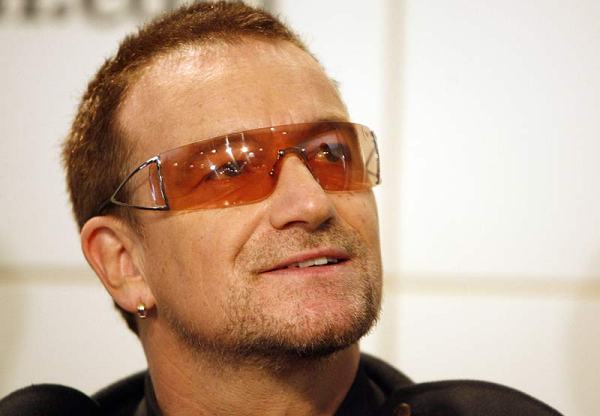 "I won't lie, our season was looking very bleak by the end of October. We were struggling big time. We had no confidence, we were constantly outclassed, we never got any luck inside the box and we had many injuries and suspensions to deal with. We were at the very bottom of the table and escaping relegation looked to be an impossible task. But I never lost faith.

If there is something that you should always keep with you, no matter how difficult something may appear to be, it is your faith. Football is not just a sport, it's a lifetime of passion and commitment for millions of people around the world. Everybody wants to be a winner, to be the best player or manager in history. Everybody wants to win trophies, to celebrate a great win in a cup final or to celebrate a last minute goal which wins the league. Football is a passion and anything can happen. It is the team that wants to win the most who can succeed. This is why I always have faith.

We didn't give up when things looked bad. We fought for survival and we did it. Game by game, minute by minute, we climbed the table. We had the belief and the commitment to do the impossible. We trained harder than ever, we played even harder. We had a few hiccups on the way but we did it. We survived when all looked lost. We did 'The Great Escape'."

This Is Our Year

"We had a very good holiday and now we can begin our preparation for the new season knowing that we can accomplish anything. We learned a lot last season in terms of recovering from a bad run and fighting for what we believe in. I believe that there is no greater experience than that. Now we can take this new experience in to the new season knowing that we can do anything, as long as we believe in ourselves and fight for the team.

We are very proud to have this new stadium and it will certainly be a big plus for the club, the fans and the community here at Ellesmere Port. It is a magnificent coup and it will be a steppingstone to future glories for Vauxhall Motors. Hopefully we will have some great memories to take home from there too! 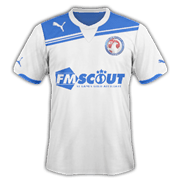 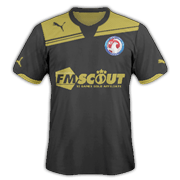 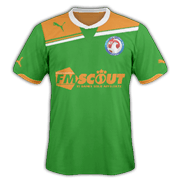 I am very happy to announce that we have a sponsorship deal going with both Puma and FM Scout. I feel that both deals will be a huge plus for us and we will have very prosperous relationships together for the foreseeable future. FM Scout is the biggest fan site for the popular gaming series, Football Manager. We (Vauxhall board of management) were very happy with the deal that was proposed by FM Scout owner, Stam, and CEO, Michael de la Parra.

Lynchy
9 years
This story is so good I wonder if its real! Those kits you are producing are out of this world! Good luck this season! The Football league awaits you!

Thanks man, I am hoping to get to the Football League soon


And we are back with another season about to unfold! This year would be important for us as we will look to battle for a play-off spot. Before the season begins, however, we have pre-season to play through and transfers to make. Here are the friendly results:

I know exactly what you are thinking at this time; "Who the hell are New Brighton?" Well, I did need to play one friendly where I would win! (My reserves don't count

) The other teams are all either in NPower League One or NPower League Two. This fact makes me happy that we claimed two draws from four games against bigger clubs. I arranged all these matches for home in hope of gaining some cash.

And now for the transfers!

Seeing as how I was £1,700 over my wage budget, I was not able to sign any players. I was also forced in to releasing a player to save our finances and Charlie Kasler was first on my list. He never managed to cement a first team places since signing in 2012.

One of the most important attributes of a good LLM manager is how he controls the club's finances. Unfortunately, my rather arrogant board decided to build a new stadium without my opinion. This, over the long term, will be a big plus for us. However, this denied us from spending money on new players and we will suffer because of that.

As you can see, we have a negative balance and a bank loan of £1.4M which is to be paid off for the next fourteen seasons. If we can gain promotion, our finances will soar. If we cannot control our finances, the club might go bankrupt soon.
Login to Quote

At least it's not as bad on my old Milan story where it would take 35 years to repay the debt!
1
Login to Quote

Jer
9 years
Don't worry, 1.4 million isn't a lot and the debt will be payed off slowly, but effectively.
1
Login to Quote

At least it's not as bad on my old Milan story where it would take 35 years to repay the debt!