May: Ending it Brightly

After starting the month with a 2-2 draw to Blackburn and then a 1-0 loss to Chelsea in the Premier League, Aston Villa faced the Blues again in the Europa League Final and exacted sweet revenge, beating them to the cup 2-1. The Premier League season was wrapped up with a 2-0 defeat of rivals Wolverhampton Wanderers, and Villa finished a confirmed 5th in the league. 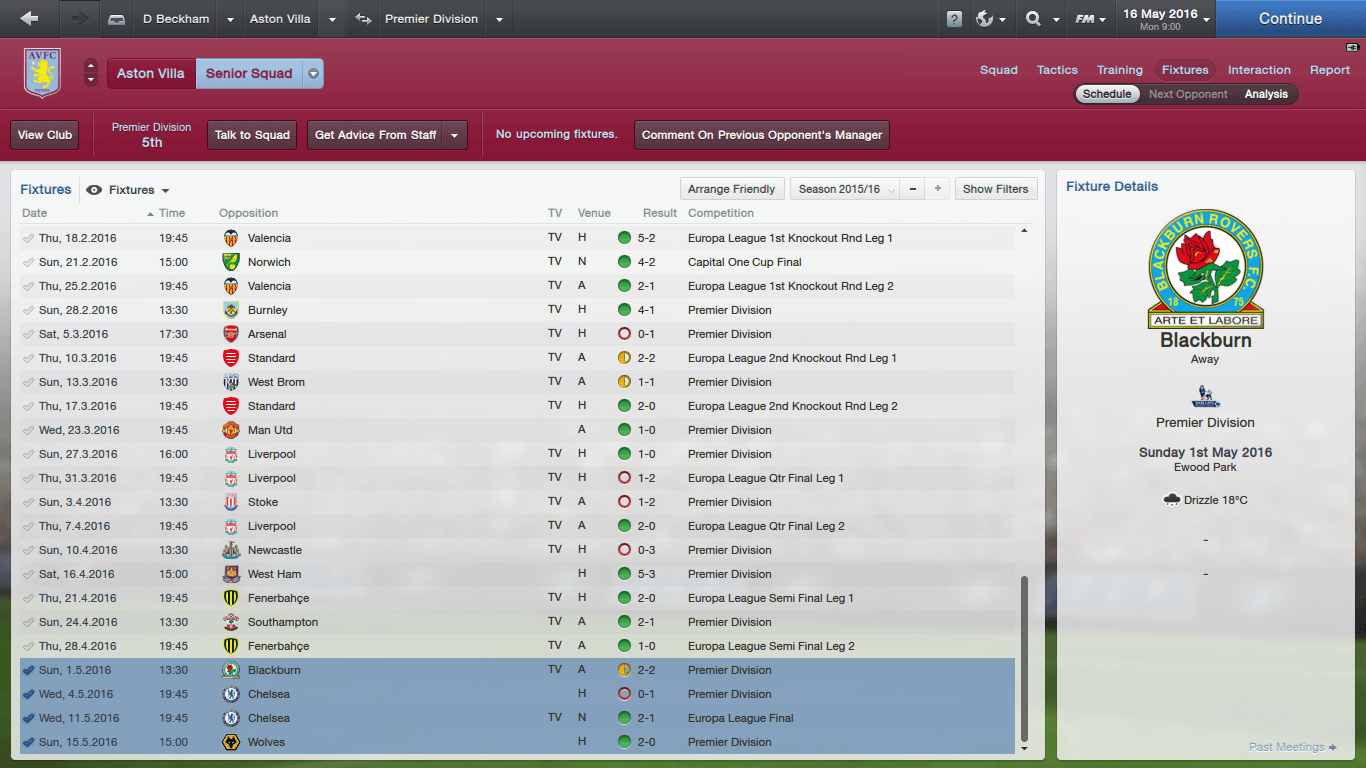 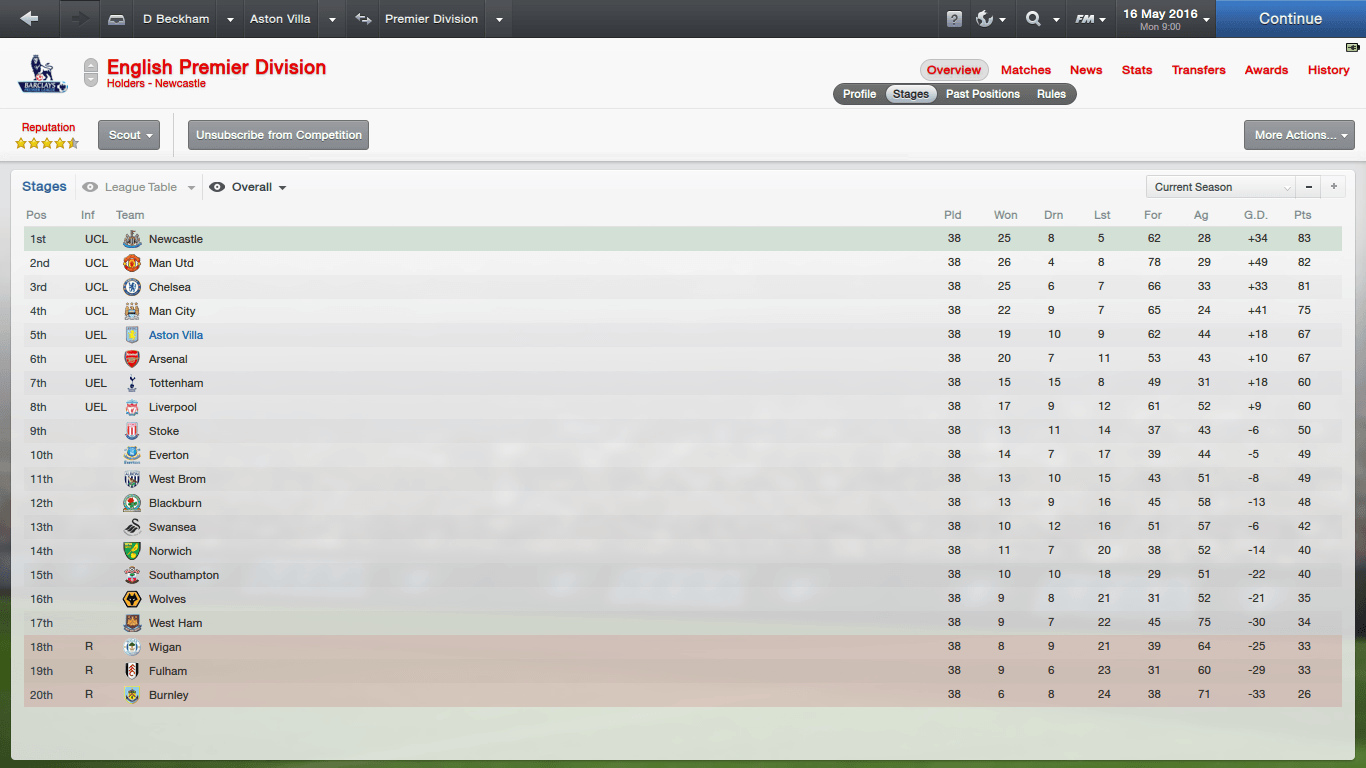 Thank you Mark, just gave you your 50th thank you

Aston Villa's players enjoyed a little success in the annual league awards this year, with Fabian Delph winning the prestigious award of Footballer of the Year and Wellington Nem coming runner-up for the Players' Young Player of the Year. Both aforementioned players were also named in the Team of the Year, with Delph on the starting eleven and Nem within the subs. 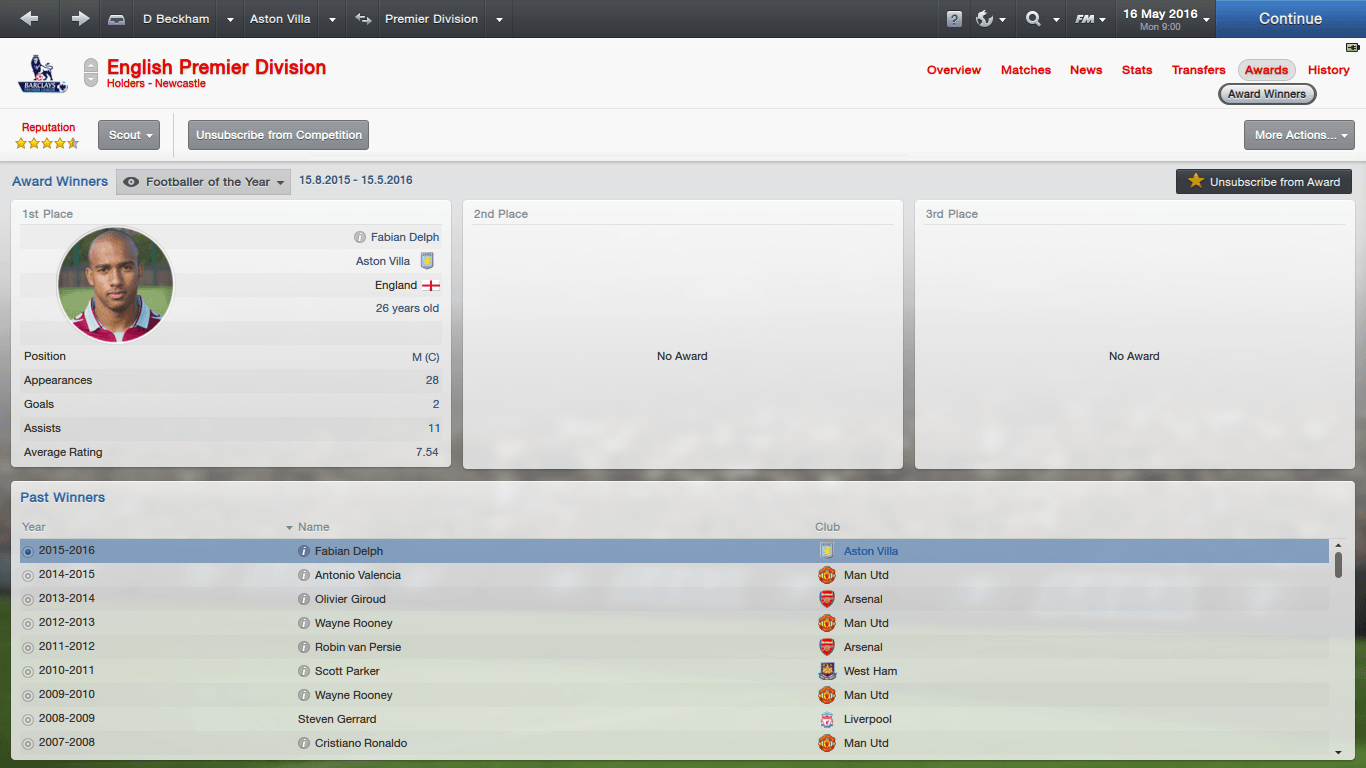 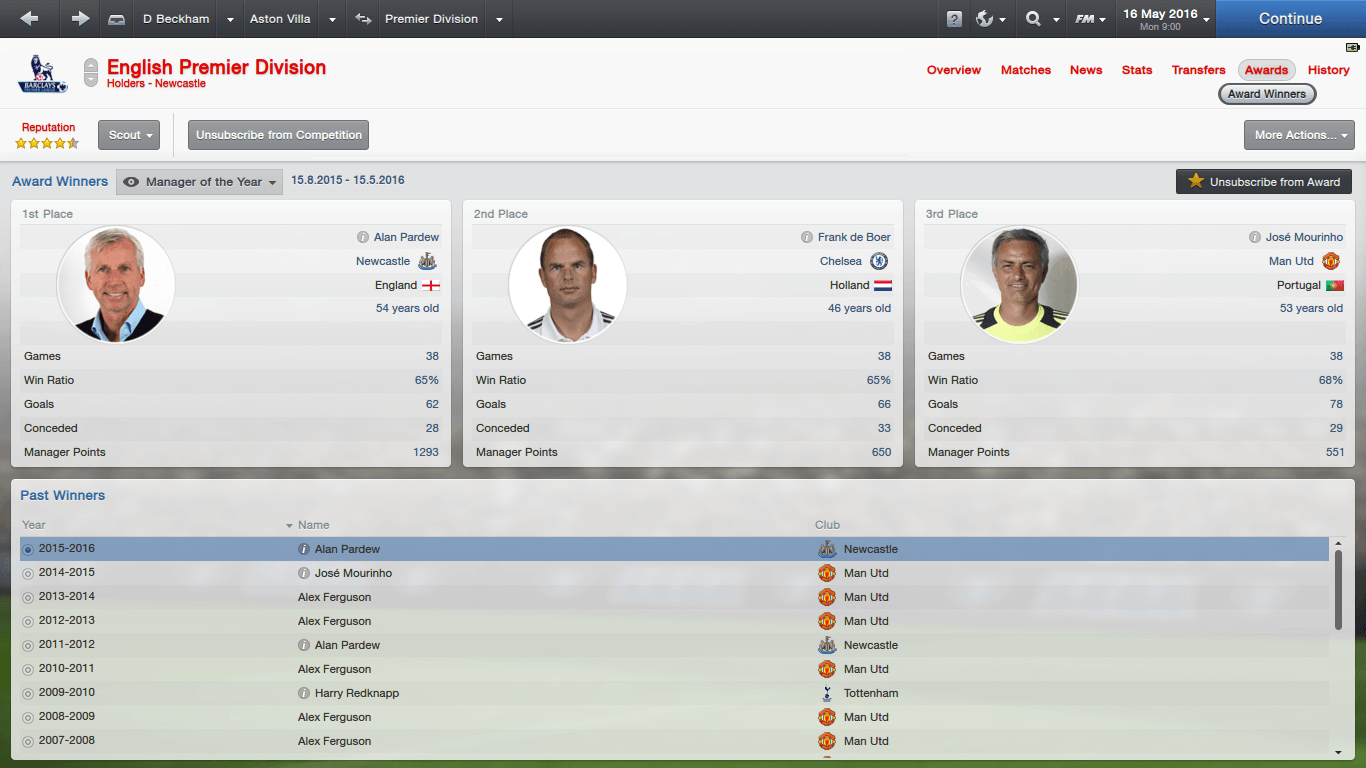 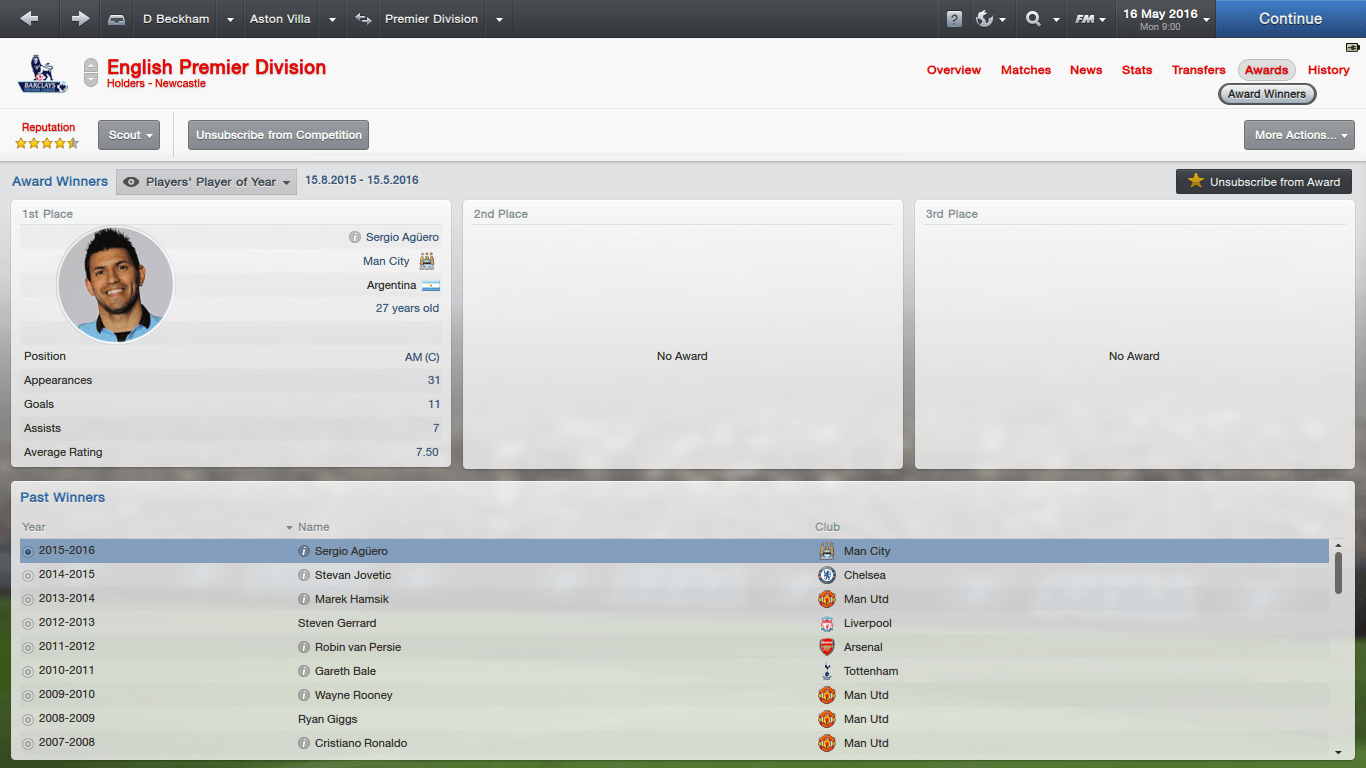 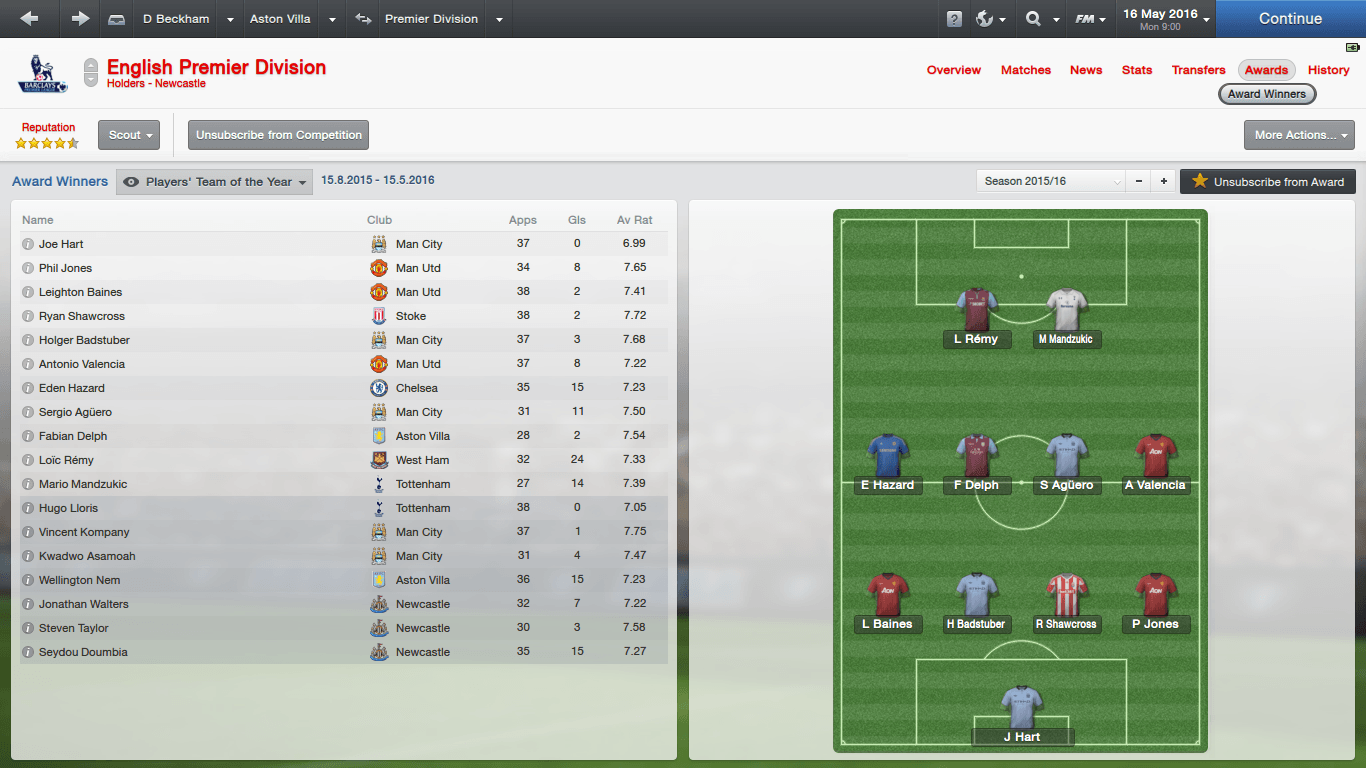 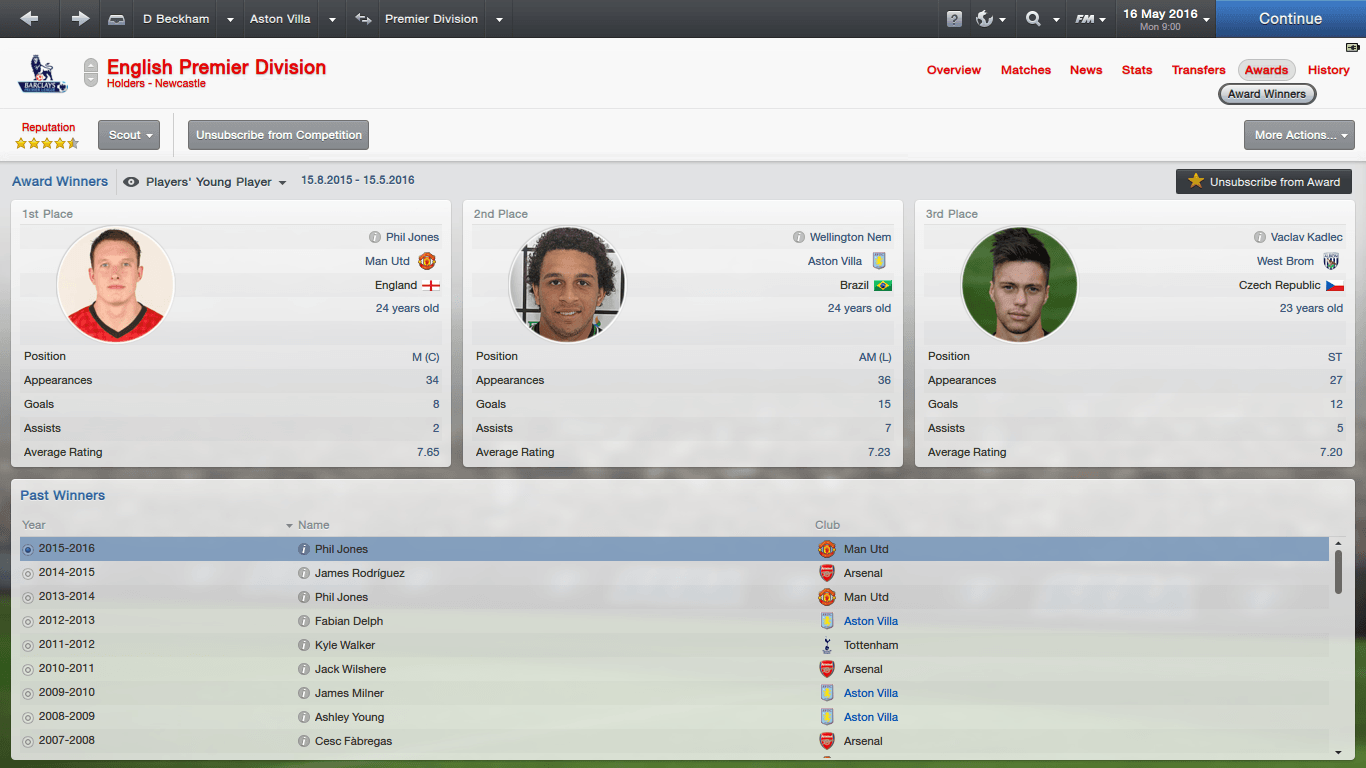 Jer
9 years
Great double Glenn! You deserve with all your ups and downs with Villa! CL and PL for you next year!
Login to Quote

I think that's a little bit too stretched... The next common fact the two teams share are the fact that they want to appoint Aston Villa manager David Beckham in their hot seats, according to the Birmingham Mail. 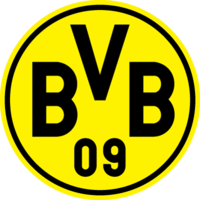 Arsenal competed strongly with the Villans through the season for 5th place, and Villa eventually edged it on goal difference after both teams finished level on points. Spalletti, sacked after being unable to qualify for the Champions' League like in recent seasons, has described the Gunners job as an "extremely tough one at this point in time", citing reasons as the "almost impregnable" big four of Manchester United, Manchester City, Chelsea and now Newcastle.

Dortmund finished 5th in the Bundesliga. Despite the Dortmund squad slowly weakening bit by bit since their achievement of a two-season consecutive title win, club chairman Reinhard Rauball still expects the best, resulting in the sacking of Dutt, ending his one-and-a-half year tenure at Der BVB.

Beckham has remained quiet on speculation linking him away from Villa Park.
Login to Quote

Jer
9 years
Wait.. What is Beckham doing with an Arsenal shirt on? Is it for wiping your ass after taking the hugest dump ever!
Login to Quote 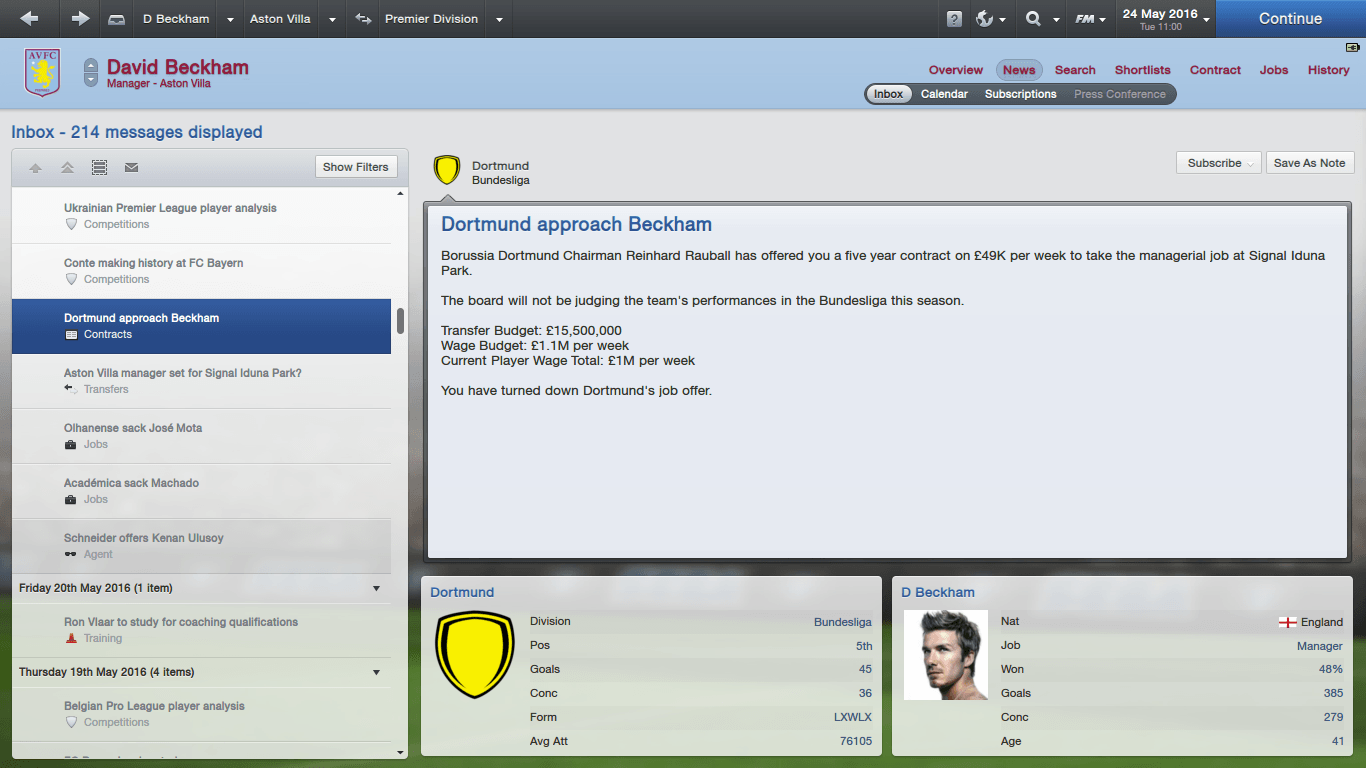 Aston Villa have confirmed that manager David Beckham has been approached by German giants Dortmund, on a contract worth 49,000 per week.

However, the successful 41-year-old has REJECTED the contract to continue his stay at Aston Villa.

Arsenal are also reportedly very keen on Beckham but have yet to make a formal offer.

But their hopes of appointing the Englishman have been dashed after Beckham broke his silence on the job speculation hours after Aston Villa confirmed the news.

"I have been reading all these newspapers linking me to other clubs. They are all very interesting jobs but I am going to stay at Aston Villa," Beckham declared. "We have just won the double and I want to build on that success. I owe the club a lot for giving me my first managerial opportunity and now I want to repay that debt."

In the back of their minds though, Villa fans know that such a debt has already been repaid.

Beckham has already won three different trophies in two seasons for Aston Villa and that haul is certain to increase.

When asked if he would ever leave the Lions, Beckham revealed, "Maybe when I win the Premier League."
Login to Quote Aston Villa midfielder Will Hughes was set for his first competitive championship with England, but has missed out after England boss Stuart Pearce was unconvinced by his fitness levels for Euro 2016. The former Derby man suffered an injury against Wolves in Villa's last Premier League game that will be keeping him out for a maximum of up to three weeks.

Hughes, who has won 2 England caps, is reportedly devastated after being cut from the final 23-man squad set to travel to France, after being called up to the initial 31-man preliminary squad.

However, Pearce has publicly assured the 21-year-old of his England future. Hughes will have plenty of chances for his national team in the future.

The Aston Villa number 7 has been a revelation since arriving at Villa Park from Derby in 2013. Costing David Beckham a fee of 6 million, he is now valued at a price of 8 million after making a total of 79 league appearances for Villa.
Login to Quote

Stuart Pearce has announced his final England squad for his first venture into a major tournament as England manager. Keeper Joe Hart will be missing in France because of an unfortunate ankle injury, and that will surely decrease the Three Lions' chances of getting far.

Jamesg237
9 years
So glad that you decided to reject Dortmund. I think you have unfinished business with the Villa. You have to win the Premier League before you leave!
Login to Quote