samdwyer23
3 years
Can't wait mate! Should be a lot of fun

It was a perfect start for 1860 Munich, scoring nine goals and only conceding one during the month of July.

Starting the season with a dominant 3-0 victory over local rivals SPVGG Unterhaching, they continued their form into the next match, keeping a clean sheet in a 2-0 win against SV Meppen.

To finish the month, Die Löwen recovered after going down 1-0 to storm home to a comfortable 4-1 victory against FC Viktoria Koln. 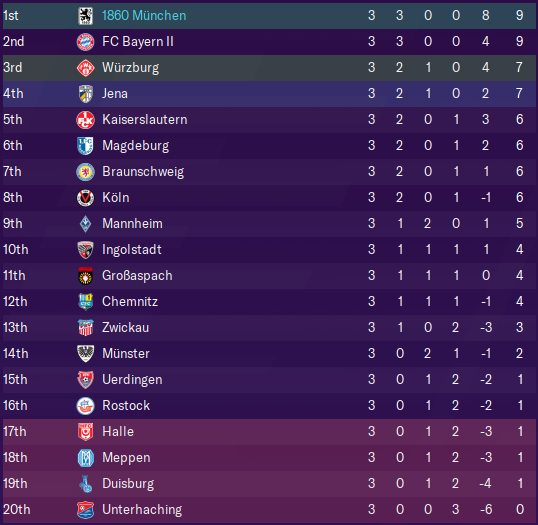 1860 Munich find themselves in equal first with FC Bayern II after the first month of 3. Liga.

Local rivals SPVGG Unterhaching are anchored to the bottom of the table as the only side yet to secure a point this season. 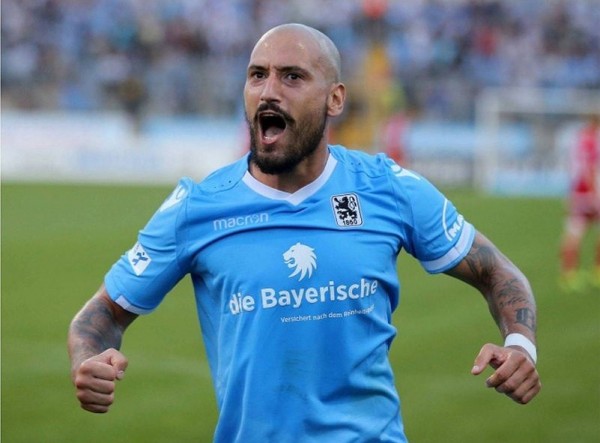 Making his way into the starting side after an injury to Quirin Moll, Timo Gebhart has taken his opportunity with both hands. The German has scored twice in three games with one assist to help his side make a perfect start to the season.

Once Moll returns from injury, it will be a tough selection decision for Daniel Bierofka to make should the 30-year-old continue his current run of form.

After suffering a hamstring strain, Weeger has one to two weeks of rest before being available for the first team squad.

26-year-old Karger is recovering from a hamstring injury and is still at least two months away from full fitness.

One of the leaders at the club, Moll is still one to two months away from returning to action after damaging cruciate ligaments in his knee.

Die Löwen face a tough run of fixtures in the second month of the season, facing the two title favourites in the eyes of the bookmakers in FC Ingolstadt 04 and KFC Uerdingen 05 at their home ground of Grünwalder Stadion.

samdwyer23: Looking forward to the challenge
Login to Quote

ScottT
3 years
Great start to the season. You've already been handed a selection dilemma when Moll returns with Gebhart working hard to keep his place. It's always a welcome problem to have for any manager. A tricky month upcoming and if this form can be sustained, I would be surprised.
1
Login to Quote

TheLFCFan
3 years
Very good start to the season with much of that down to Timo's performances who, as you and Scott have both stated, will be looking to maintain his place once injuries clear up. Hopefully this good moth can continue for many more to come!
1
Login to Quote 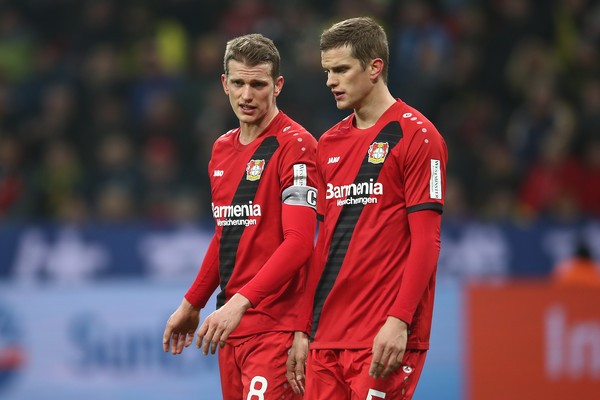 Bayer 04 Leverkusen and 1860 Munich have announced a partnership to see the clubs working together moving forward. An annual friendly will be held between the two clubs while 1860 Munich will also have the option of having players at the club on loan for free.

“Our current squad contains a number of players who were produced by the 1860 Munich youth system including both our captain Lars Bender and vice-captain Kevin Volland. Formalising a link between the two clubs was on obvious move and I am looking forward to seeing it flourish in the years to come.” said Bayer 04 Leverkusen manager Peter Bosz.

“This partnership is great for both clubs and I look forward to working with Bayer Leverkusen. Having access to talk with their coaches and staff is a great resource that will see our club improve in all areas.” said 1860 Munich President Niklas Volker.

1860 Munich will look to continue their undefeated start to the 3. Liga season as they face FC Ingolstadt 04 who recently eliminated Bayer 04 Leverkusen in a penalty shootout in the DFB-Pokal.

ScottT: It will be a tough decision, we will need to see if Gebhart is able to maintain his form though.

TheLFCFan: I certainly hope we are able to maintain our current form
Login to Quote

ScottT
3 years
This link could prove to be more than useful in the next twelve months or so. A progressive and excellent move for both parties.
1
Login to Quote

TheLFCFan
3 years
A good link to make for the club, and hopefully one that you can reap the rewards of as you look to make your way through the leagues.
1
Login to Quote

Starting the month off with a 2-1 win against competition favourites FC Ingolstadt 04, 1860 Munich then suffered their first defeat of the season, going down 3-0 against Hallescher FC after the July player of the month Timo Gebhart was sent off in the 20th minute.

A hattrick from Ghanian striker Osei Owusu saw 1860 Munich win comfortably against KFC Uerdingen 05 before finishing the month with a victory over FC Carl Zeiss Jena courtesy of a goal in the 81st minute from 18-year-old Fabian Greilinger. 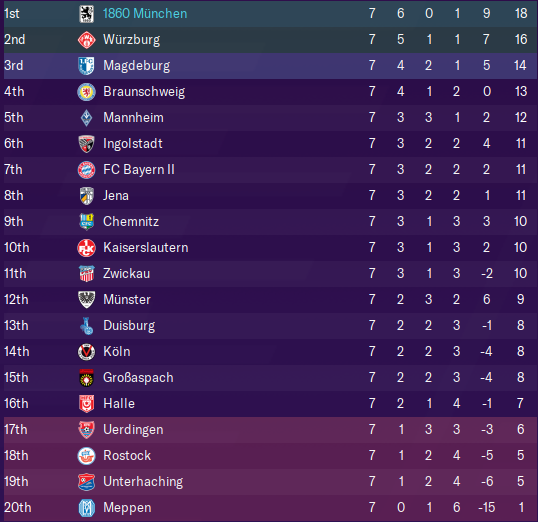 1860 Munich find themselves alone at the top of the 3. Liga table. FC Wurzburger Kickers find themselves only two points behind with their striker Dominic Baumann currently topping the goalscoring charts with eight goals in seven matches.

At the other end of the table, SV Meppen find themselves firmly on the bottom with no signs of being able to turn it around after losing 7-0 in their last fixture against SC Preussen Munster. 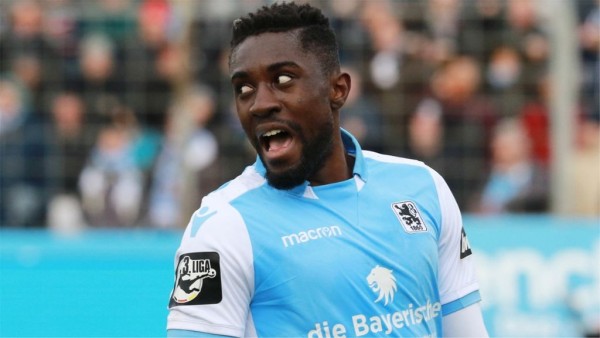 Currently on loan from Bundasliga 2 side DSC Arminia Bielefeld, the 22-year-old Owusu has begun to feel more comfortable in the 1860 Munich set-up.

Scoring four goals from four games, including a hattrick against KFC Uerdingen 05. The Ghanaian striker was also named player of the month for the entire 3. Liga competition for August.

After twisting his knee in training, Wein will not be available for the first fixture of the month against 1. FC Magdeburg but will return to the first team squad within the next two to three days.

Karger is continuing to recover from a hamstring issue, he is predicted to return in around one to two months time.

The 28-year-old has moved into the rehabilitation phase of his recovery but is still three to five weeks away from returning.

Another tough fixture to start the month awaits Die Löwen, taking on third place 1.FC Magdeburg, followed by three fixtures against sides in the bottom half of table.

ScotttT & TheLFCFan: I hope I am able to use the link to build the club moving forward while removing pressure on the wage budget
Login to Quote

TheLFCFan
3 years
Another good month with the only downside being the first loss of the campaign. However, still top of the league and Osei is looking in form which is always a good sign!
1
Login to Quote

ScottT
3 years
Great character shown from the players to come back strongly after a heavy loss. A promising start!
1
Login to Quote

It was a poor start to the month, suffering a 3-1 loss to 1.FC Magdeburg with an injury to Stefan Lex adding to the frustrations of the 1860 Munich faithful. Back to back victories followed against FC Hansa Rostock and Chemnitzer FC with the latter fixture seeing two additions to the injury list in Tim Rieder and Fabian Grellinger.

To finish the month, SG Sonnenhof Grossaspach produced an upset with a strong display against a 1860 Munich side missing five starting players from their regular line up in total. 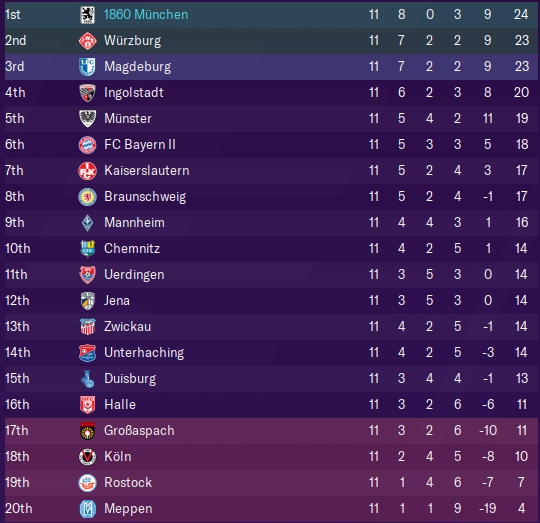 Despite losing two matches in the month, 1860 Munich remain at the top of the table with FC Wurzburger Kickers and 1.FC Magdeburg proving to be potential promotion candidates. 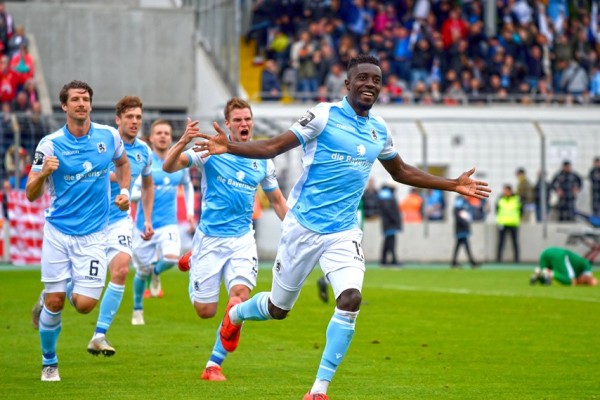 Once again, Osei Owusu scored four goals in four games, matching his efforts from the previous month and once again being named 3. Liga player of the month.

Numerous media pundits continue to question 1860 Munich manager Daniel Bierofka on the potential for the Ghanaian to make a permanent move to the club from Bundasliga 2 side DSC Arminia Bielefield.

Starting for 1860 Munich due to the injury to Nico Karger, the 19-year-old suffered an ankle injury which will see him miss one to two weeks of action.

Still yet to see the field this season, left winger Nico Karger may return towards the back end of October.

A reoccurring hip injury has plagued Stefan Lex and is expected to keep him out of action for close to a month.

Currently on loan from Bundasliga side FC Augsburg, starting centre back Tim Rieder is out with a back complaint for the next fortnight.

ImThatSybGuy: A very good start to the season overall but maintaining this form is going to be difficult with the injuries I am having to face currently.

TheLFCFan: Owusu looked absolutely horrid in the pre-season, didn't score a single goal. I decided to continue with him based on being my most talented striker and now it's beginning to pay off.

ScottT: I have to admit, at the time I felt that result would send us on a poor run of form.
Login to Quote

ScottT
3 years
Another tricky month in store. A mixed bag of results but you still find yourselves top which is the main priority. It's simply a case of doing what you can to ensure you set the pace and remain there. Goals don't seem to be an issue at all with the likes of Owusu in the side.
1
Login to Quote