I would like to thank Louis O for this fantastic new banner. You can check out his story here.
Login to Quote

BeanyUnited
8 years
Forgot to add good to see you back!

I know what you're up to 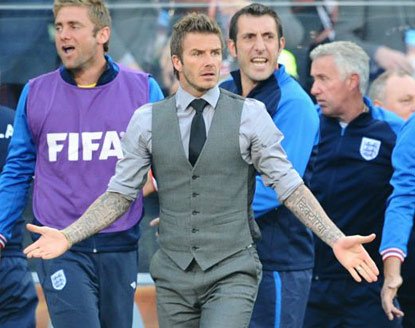 FC Bayern Munchen boss David Beckham spoke to Sky Sports today as he returned to England with his Bayern squad for their Europa League Group J clash against Southampton this Thursday.

"No offense to Rafa Benitez but he didn't do much here at Bayern. It's up to me to return us to the winning days of Antonio Conte, and I intend to fulfill that objective."

When quizzed on his searing comments against Benitez, now the Atletico Madrid manager, Beckham said, "As I said there is no offense meant towards Benitez. But he changed a winning team into a losing one. In my opinion Bayern were poor last season because of Benitez.

"I'm not complaining about it, though. He's just given me a greater challenge. I like challenges."
Login to Quote

A Chance to Return 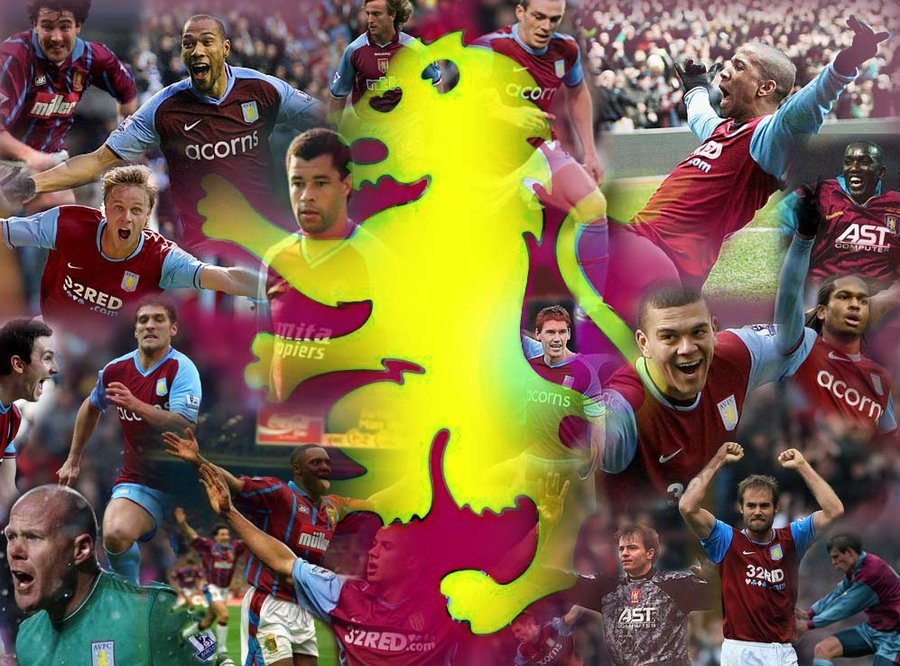 The Europa League knockout round draws took place today - and what a great coincidence, with FC Bayern Munchen drawing Aston Villa for the Second Knockout Round.

David Beckham will have a chance to face his former side if his Bayern team beat First Round opponents Udinese, while Villa will have to triumph against Bayern's fellow Bundesliga team Hamburger SV.

Beckham's boys unfortunately lost 2-1 to a spirited Southampton side, but the loss wasn't enough to prevent Die Bayern from topping the group with 15 points taken from 6 games. Sampdoria also narrowly edged the unlucky Southampton by a point to take the next qualifying spot of Group J with 10 points.

Aston Villa also topped their group, coincidentally also taking 15 points from 6 games, 5 of which Beckham was in charge, and they are joined by fellow Group E mate Real Betis in the knockout rounds. 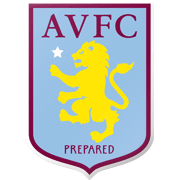 "It's very exciting that I can be back at Villa Park so quickly after my departure," Beckham told the Munchen Football Paper back in Munich. "It will definitely give both the team and I an extra incentive to beat Udinese, and I hope it is the same for Aston Villa."
Login to Quote

TheMS99
8 years
OOOOOOH! so hoping that Villa vs Munich happens

Thank you for the nice comments MS! 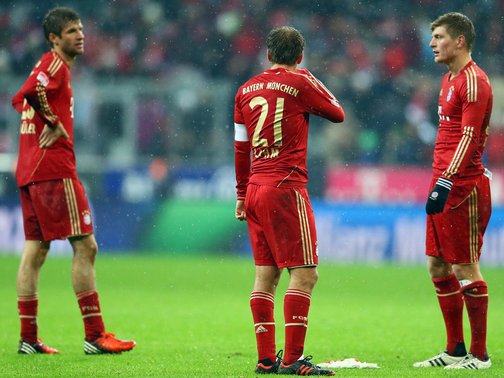 David Beckham remarked early on in December that he was definitely going to make changes to the squad in January. We know that players will be departing, but who exactly is Beckham looking to sign? Here, Sky Sports take a look at some of the players that have been linked with Beckham and FC Bayern Munchen this December. 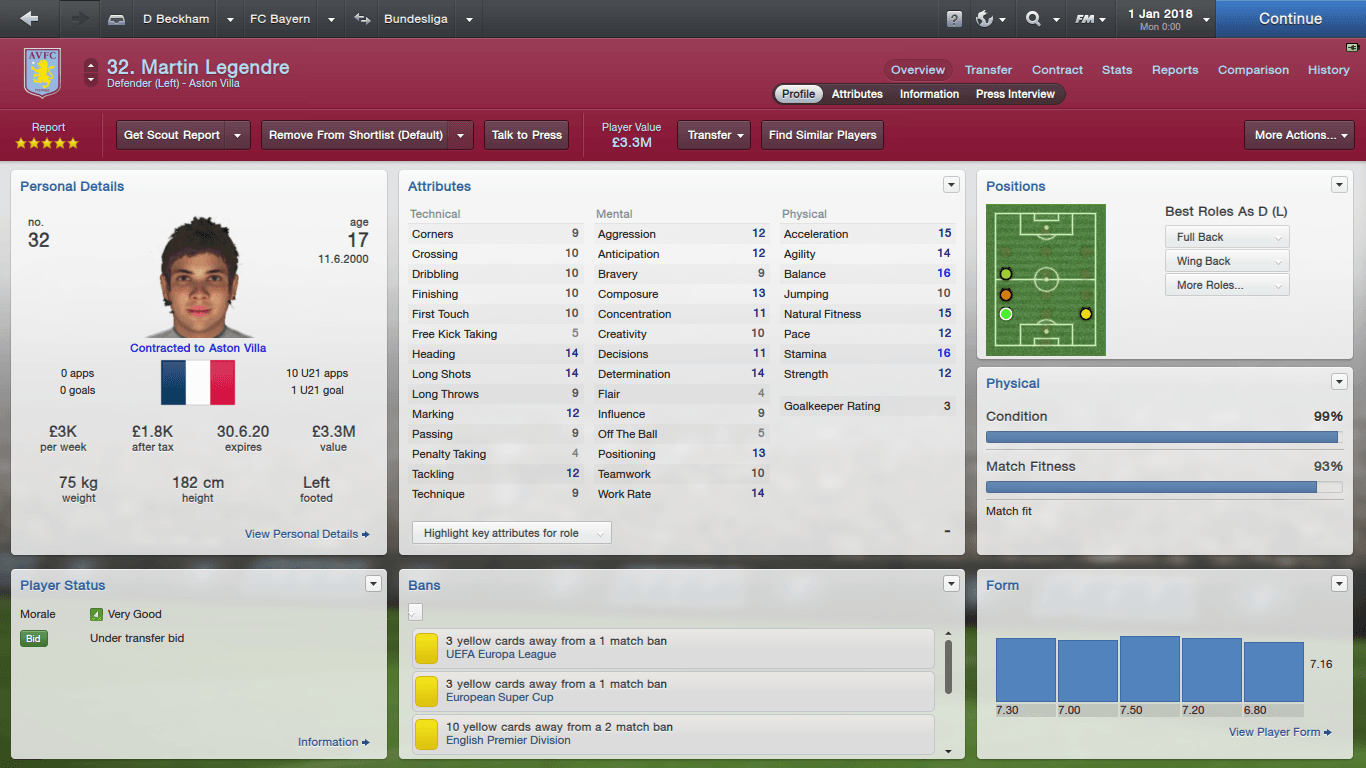 A name that might not be known to the fans of Bayern, but one that Beckham holds in high regard. Legendre was brought to Aston Villa from Olympique Lyon by Beckham in 2015 and made his senior debut for the Villans at age 15 just a few months later - such was his talent. The French Under-21 international operates at left-back and will certainly be keen to join his old gaffer in Munich, but Villa might not be so keen on losing one of their best young talents. 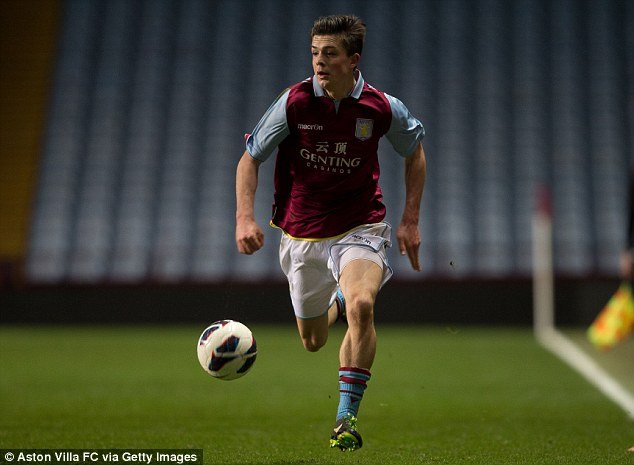 Handed his senior debut by David Beckham in 2014 at the mere age of 19, Grealish went on to make 21 appearances in the Premier League that season. However, the constant presence of Wellington Nem and Alex Oxlade-Chamberlain on the wings have not given him the ability to progress at Villa and the 22-year-old is ready to leave the club he has been a part of from childhood after the departure of Beckham. There will certainly be more chances available for him in Bayern than in Villa - but Chelsea are also interested. Although it is almost expected that Grealish will join the manager he "respects the most", according to an interview done last year, there is still a possibility he will choose to remain in England with the Blues. 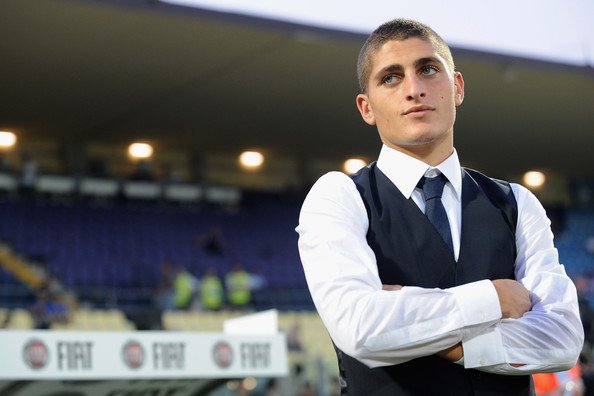 Since leaving Pescara for Paris Saint-Germain in 2012, what was once an exciting young talent has turned into a once exciting young talent. Verratti packed his bags for the oil-rich PSG after his brilliant showings for Pescara but only managed to make 39 Ligue 1 appearances over 3 seasons. Despite leaving to join Tottenham in 2016, Verratti has only made 4 appearances in the Premier League in over 2 seasons for Spurs, and is now ready to pack his bags again. Beckham is interested in reviving the Italian's career, although Manchester United and Manchester City are just as interested. 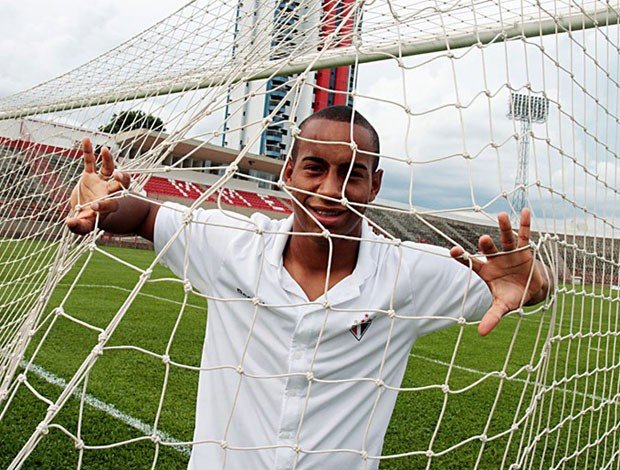 Apparently the next Neymar, and he has the goalscoring record to prove it. Ademilson has fired his local club Sao Paulo to great heights. The 23-year-old Brazil international has scored 168 goals in 304 appearances so far after making his debut as an 18-year-old in 2012. After 6 years of being Sao Paulo's main man however, Ademilson is finally ready to move and Bayern is ready to grant him that. However, Sao Paulo aren't as ready and have placed a 50 million price tag on him. Beckham always has his ways though, and you could see Ademilson in a Bayern jersey by the end of January. Who knows?
Login to Quote

Arvind
8 years
Bayern do not need Villa or Spurs rejects!

Don't know about Verratti, though, never used him.

Ademilson looks class, and I'm going to do my best to get him.

With their current form in the Bundesliga, apart from a few silly draws, Bayern Munich look on course to catching up with Schalke, who are more than 10 points ahead, in the Bundesliga title race. The loss to Southampton in the Europa League marks Beckham's first loss as Bayern Munich manager, but his Bundesliga record is still one hundred percent. 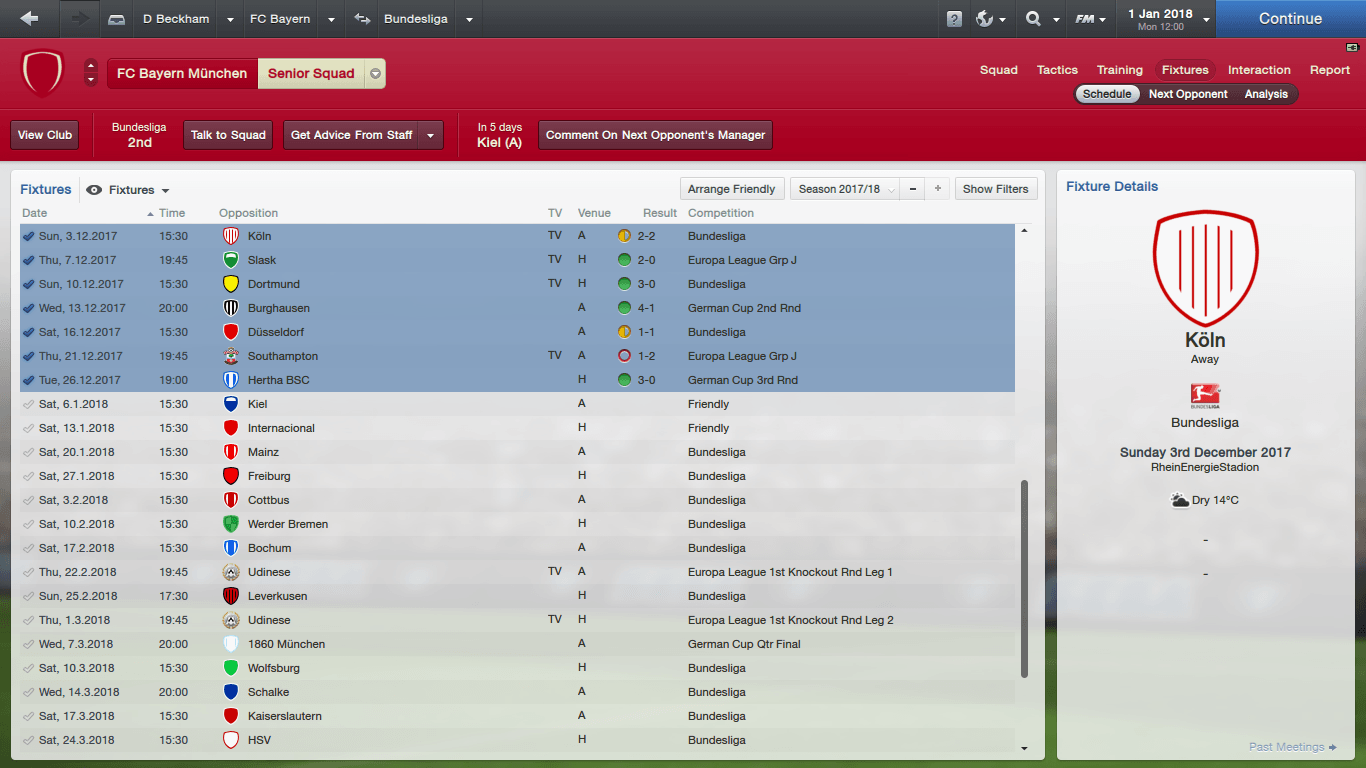 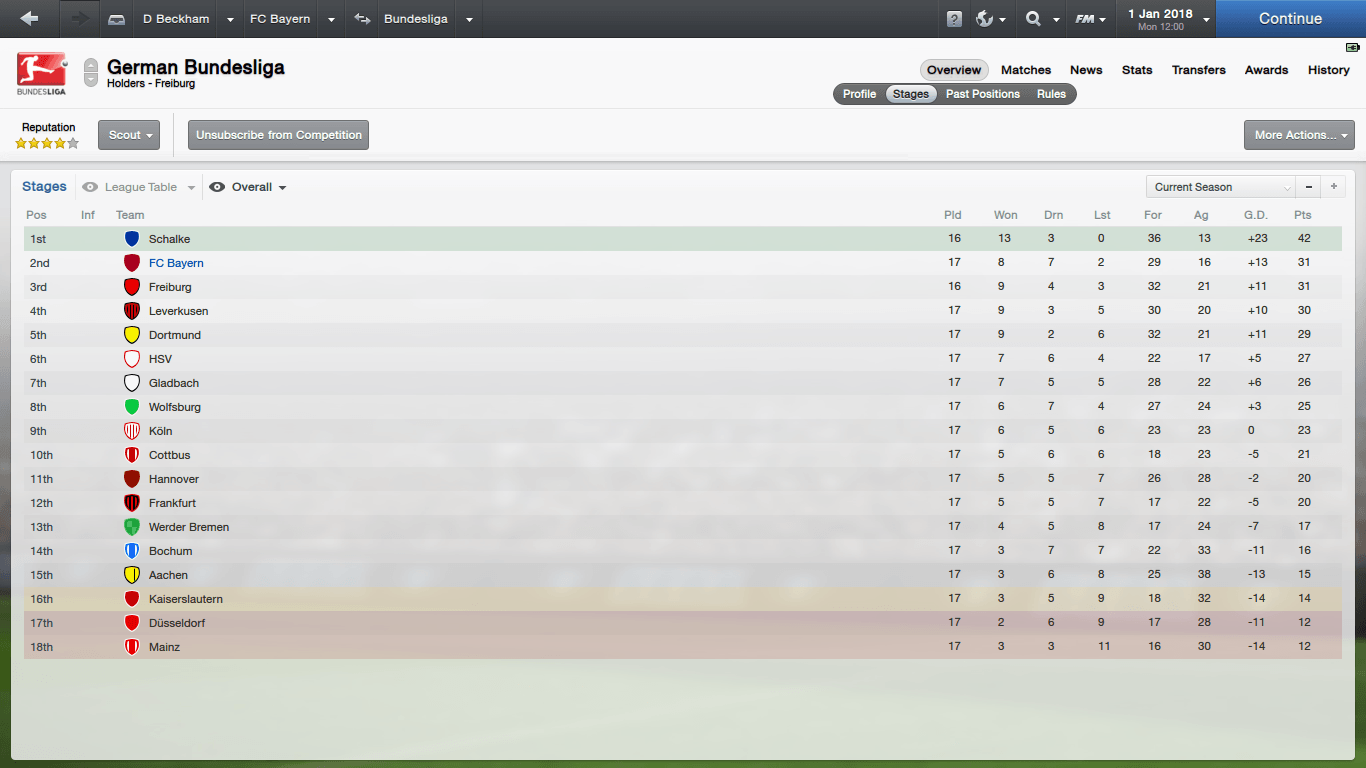 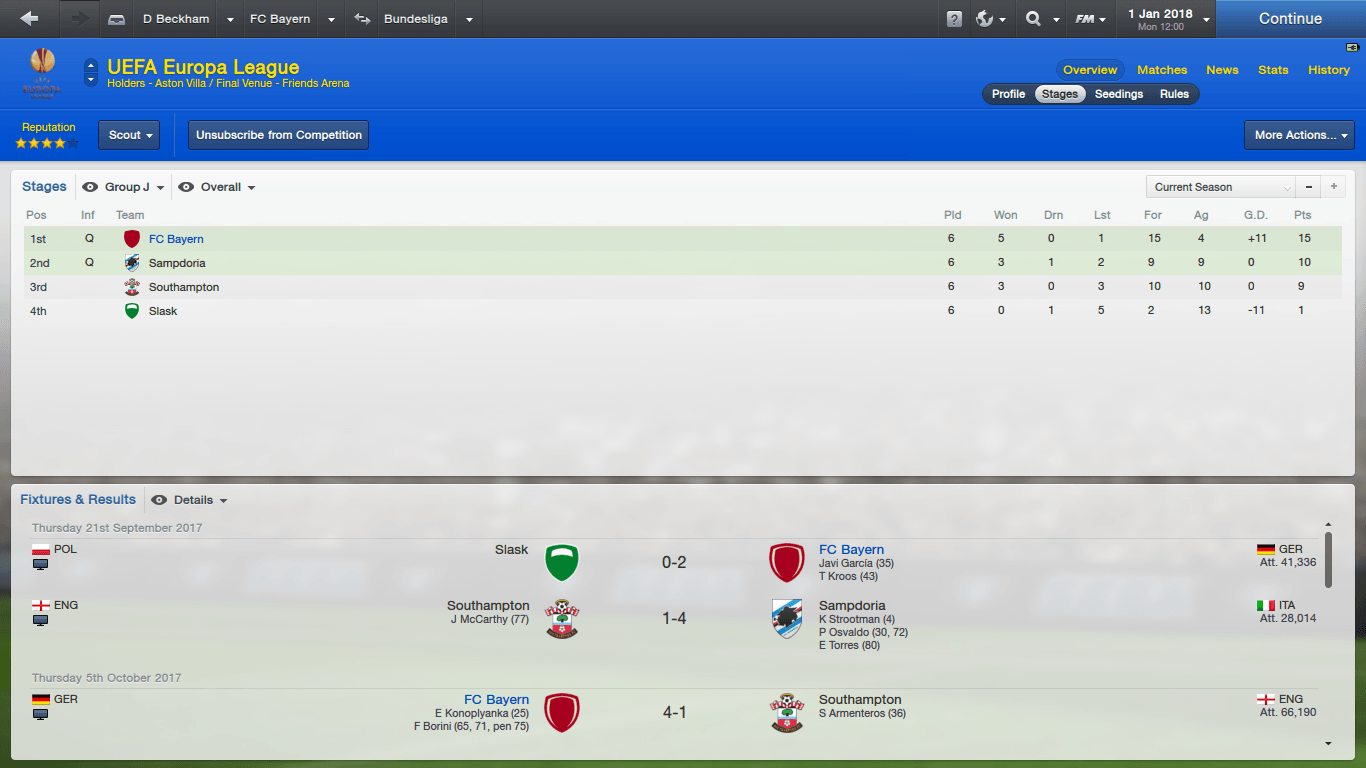 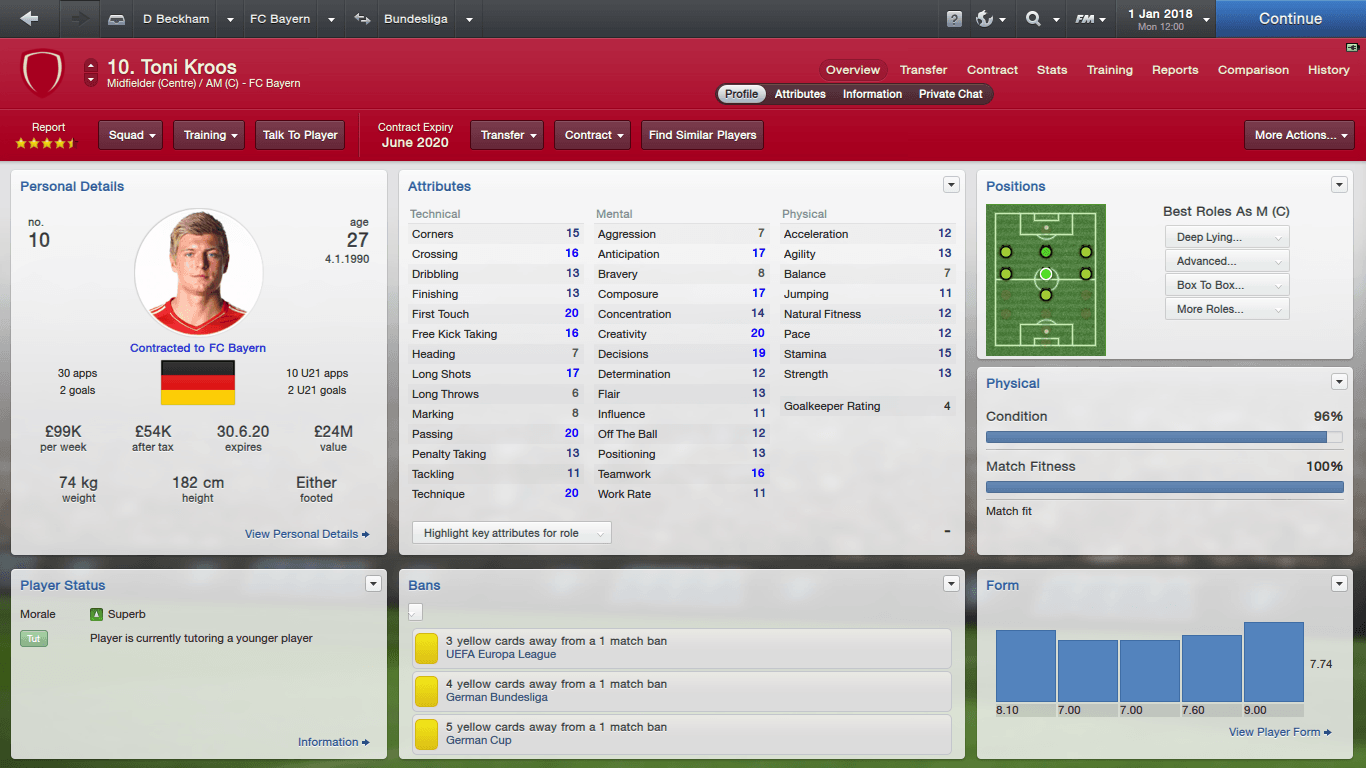 Toni Kroos has been absolutely immense for Bayern this month as he has been every other month. He is even in the top three for World Player of the Year and has won a spot in the World Team starting eleven - and rightfully so. His December performances have mostly been the deciding factor of Bayern's wins, and Beckham will hope that his star player's performances will carry on for a long time. 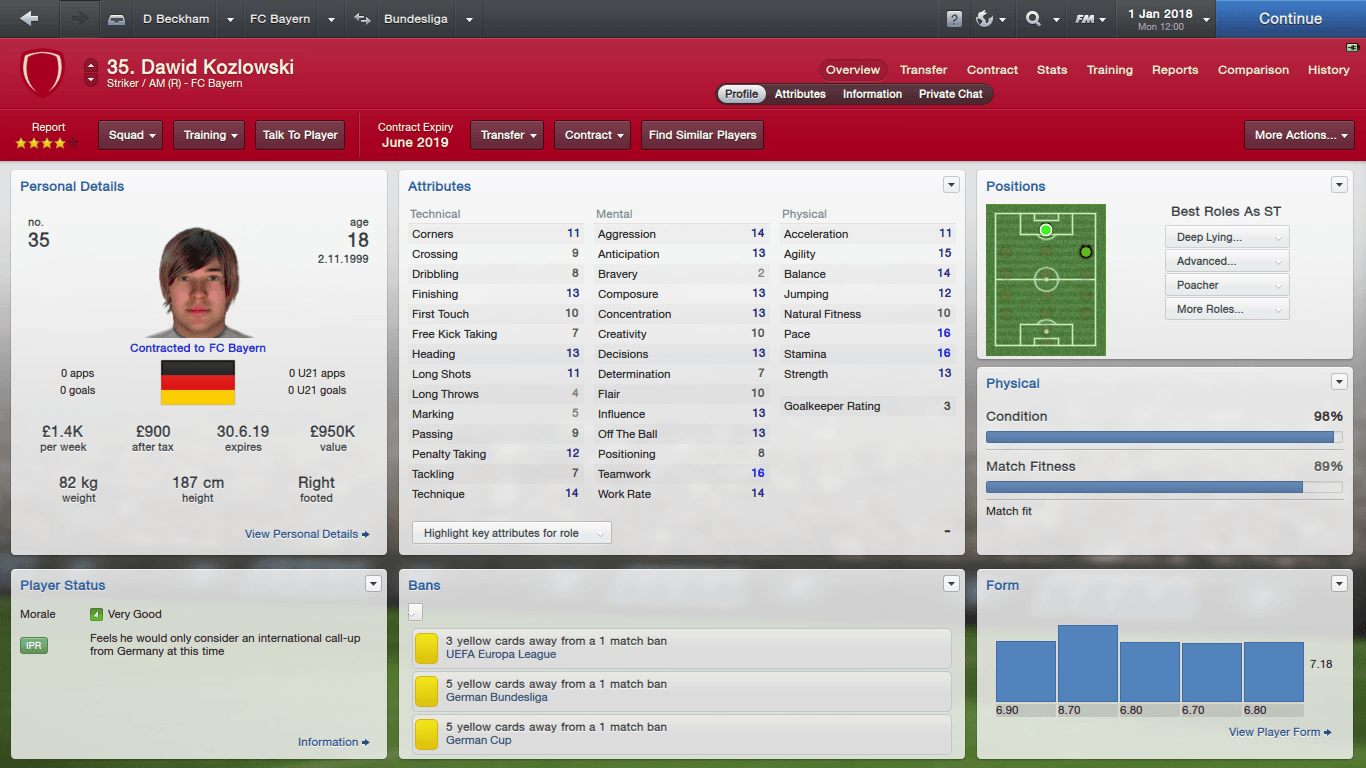 Dawid Kozlowski, on his senior team debut of the season, played in his natural role as a striker and finished off Third Division side Burghausen with a brilliant brace to help his side advance to the Third Round of the DFB Pokal. The 18-year-old's performance against Burghausen will no doubt have impressed Beckham.
Login to Quote 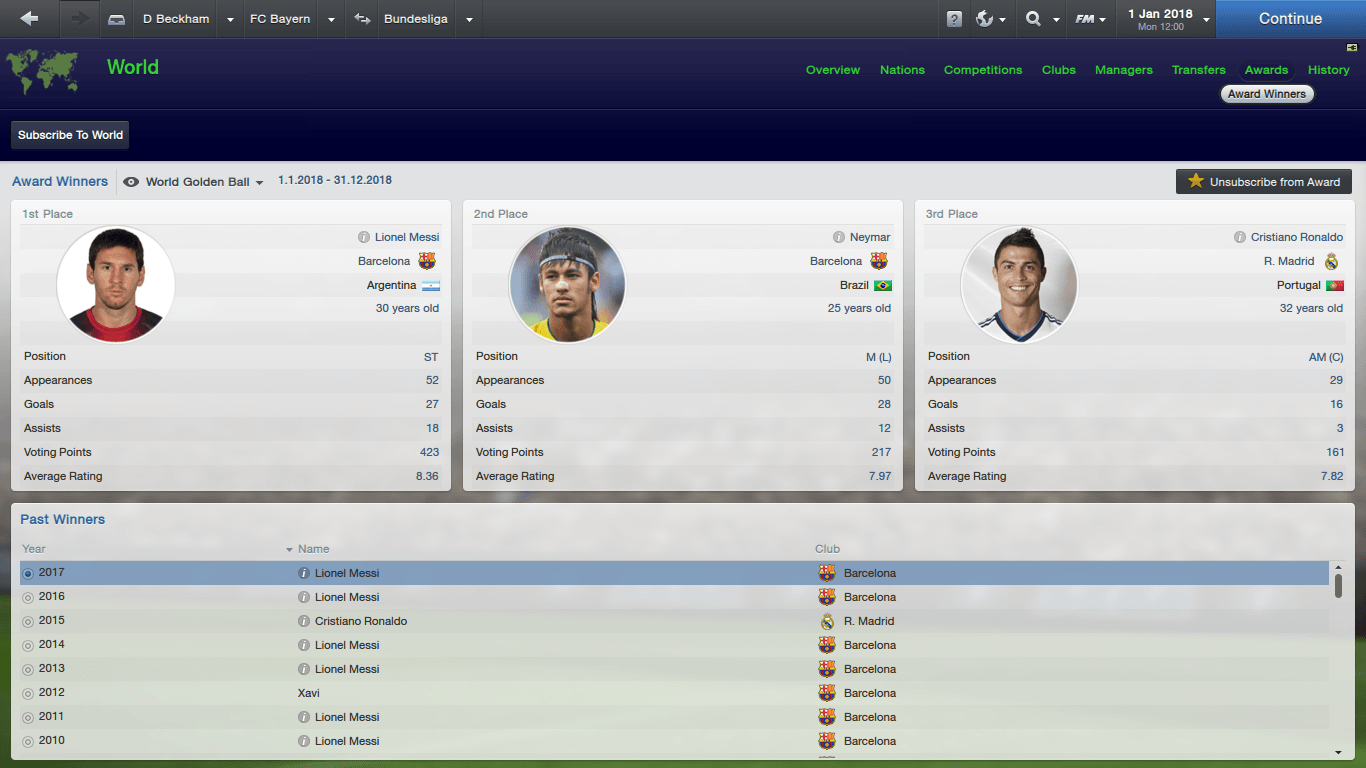 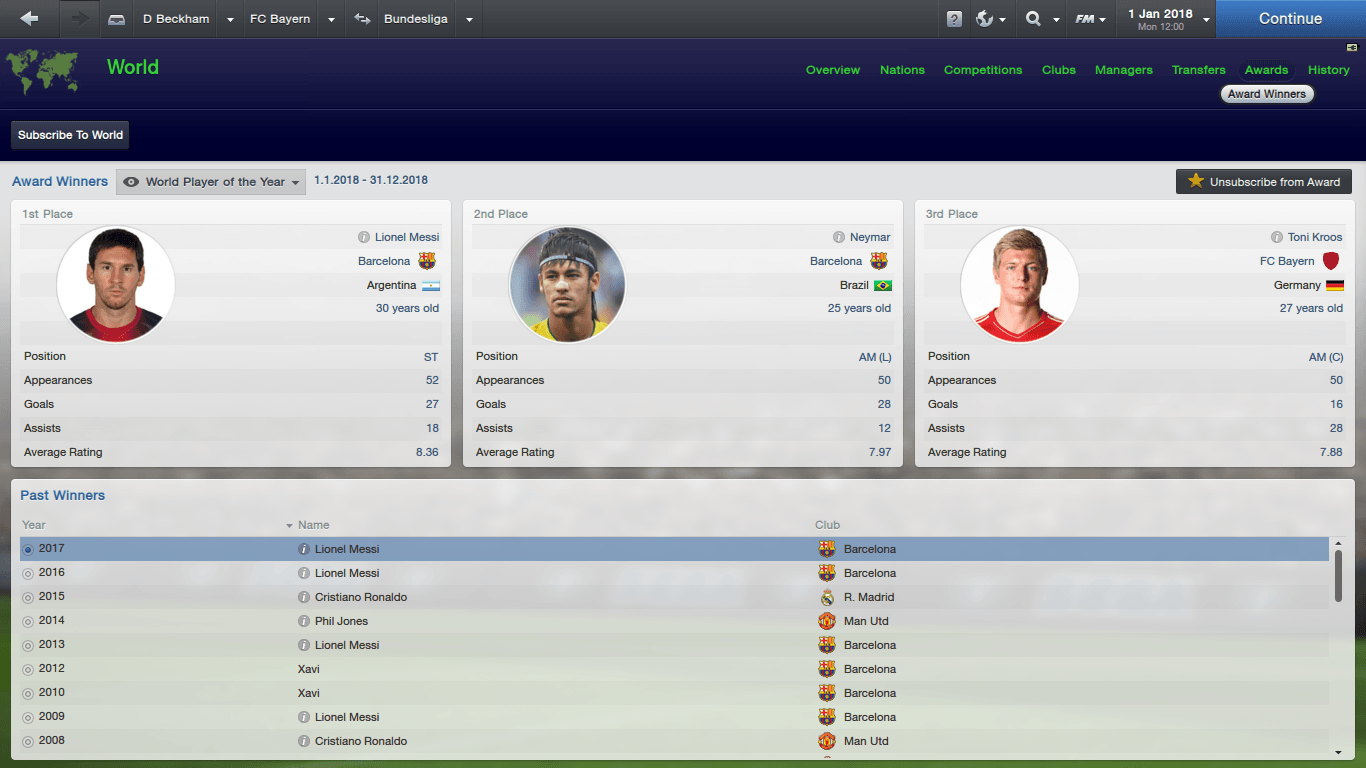 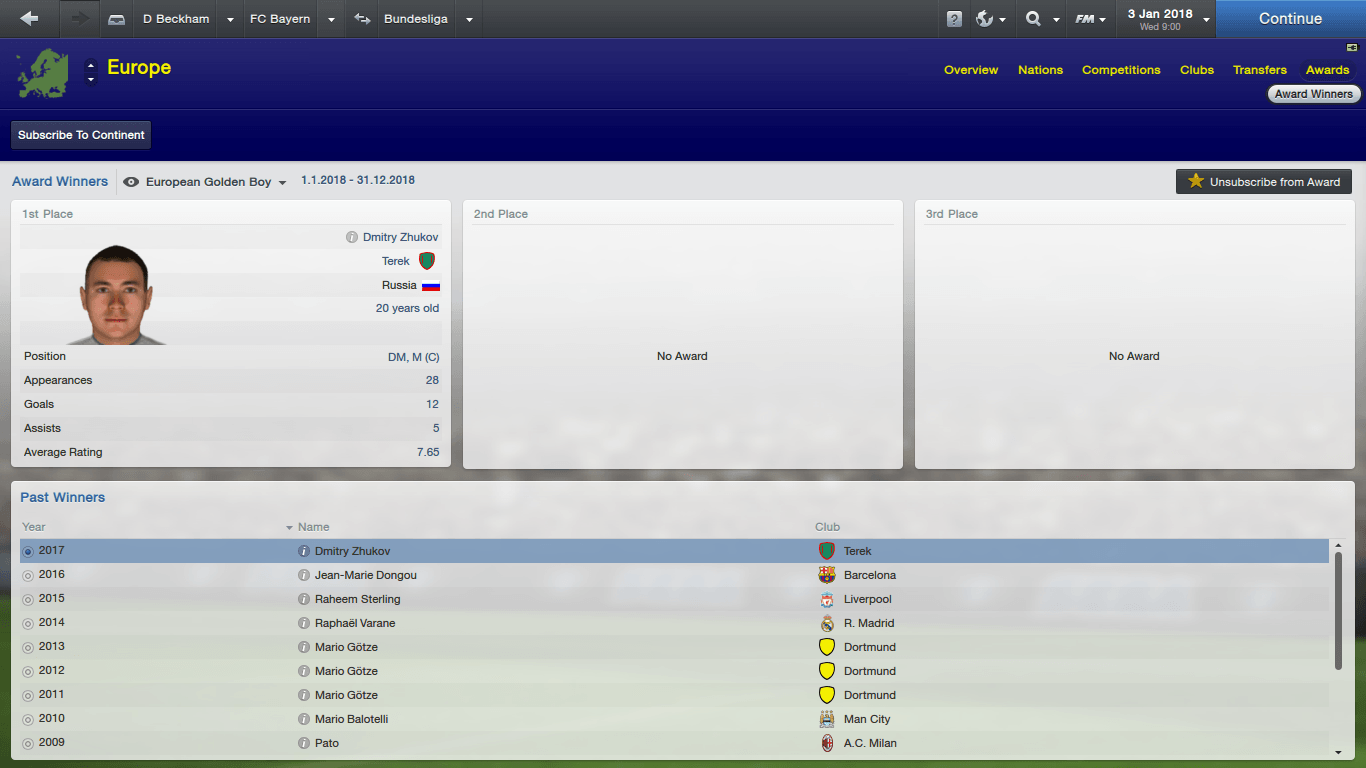 k1rups
8 years
Ademilson is quality definitely make a move for him...Good set of results to keep the climb up the table going!
1
Login to Quote