The Longing for Munich 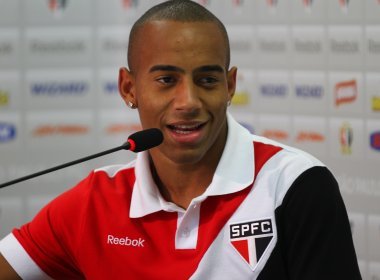 In an astonishing interview today, Sao Paulo striker Ademilson has hit out at manager Guilherme Macuglia for "playing games" and "delaying his transfer out of the club".

The 23-year-old was lethal for Sao Paulo last season, which ended just barely a few months ago, as he scored 43 goals in 53 appearances in the Campeonato Brasileiro Serie A.

However, Ademilson is reportedly ready for a new challenge after being the main man for Sao Paulo for 6 years - and is very keen on a move to Bayern Munich. Likewise, Bayern boss David Beckham is interested in bringing the Brazil international over to the Allianz Arena.

Unfortunately, Sao Paulo manager Macuglia has placed an astonishing 50 million price tag on his star player and Ademilson has now hit out at his own manager. 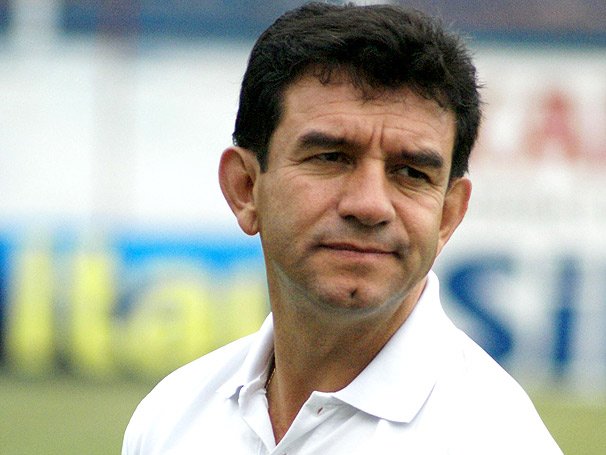 "It is stupid," he huffed with annoyance, speaking to The Rio Times. "Macuglia says that he will allow me to leave. But he is not letting me leave until Bayern pays 50 million. This is stupid. He obviously wants to keep me here. I think he has to understand that I want an opportunity to make my name in Europe. I cannot stay here at Sao Paulo forever.

"He is just playing stupid games and I am getting frustrated. If things go on like this I am refusing to kick a ball for Sao Paulo ever again."

The interview is sure to distance himself from the club and it's fans, but Macuglia is reportedly determined to keep Ademilson at Sao Paulo.
Login to Quote 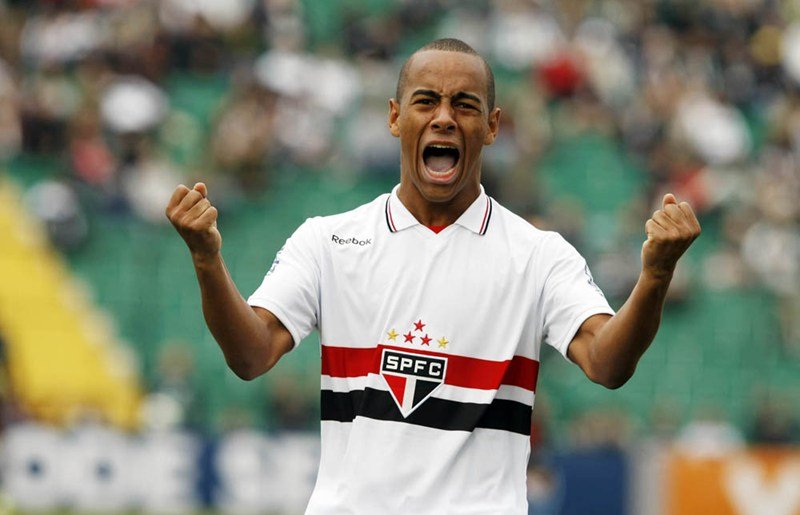 Bayern Munich have finally completed the long-awaited signing of Brazilian sensation Ademilson for a record-breaking 48 million.

Ademilson, who turned 24 last week, was the prime target of Bayern this January but his move to the German giants have been thoroughly delayed by his club Sao Paulo, who were reluctant to let go of their star striker.

However, here he is now.

His lethal goalscoring record speaks for itself. He scored 42 goals in 53 appearances in the Brazilian league last season and has helped Sao Paulo made a winning start to the new season as well with 3 goals in 3 appearances just before his switch to Die Bayern.

Ademilson has been pressing Sao Paulo club officials for a move and even ranted in an interview last week that manager Guilherme Macuglia was "playing games" over his imminent departure for Bayern.

With the arrival of Ademilson, Fabio Borini has departed Bayern for a fee of 18 million to Juventus. 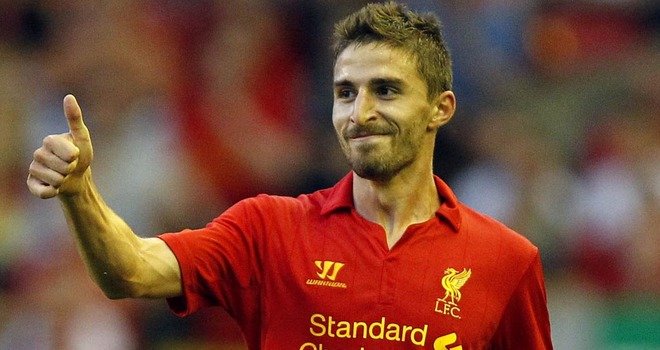 The 26-year-old striker's number 9 shirt will be taken by Ademilson as he returns to his native Italy.

Borini joined Die Bayern from Liverpool in 2015 for 15 million and has been a regular fixture in the first team since, although had a constant lack of goal-scoring consistency.

Ademilson will now fill the void left by Borini, and the highly-rated South American spoke to the Munchen Football Paper today about his new club.

"Bayern are a fantastic club and David Beckham is a great manager to work under. It will be awesome being here and I hope I can score as many goals as I did in Sao Paulo.

"I knew I didn't leave Sao Paulo in a good way but I hope the fans can still remember me for my goals and all the good times.

"I will always remember my time at Sao Paulo. Now it's time for me to embark on a new chapter of my career with Bayern Munich.

"I want to be very successful here at Bayern."
Login to Quote

Daily thanks limit reached, sorry about that Louis

Anyway, yes, I think I overpaid, but Sao Paulo were being greedy faggots, so

Daily thanks limit reached, sorry about that Louis

Anyway, yes, I think I overpaid, but Sao Paulo were being greedy faggots, so

Funny, we were talking about the thanks limit yesterday 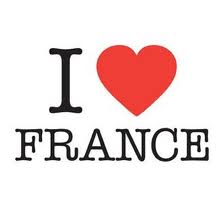 Both hail from France and are 15 years of age.

Besnard comes from CS Sedan Ardennes for 5 million, while Marcelin will arrive from CS Louhans-Cuiseaux. 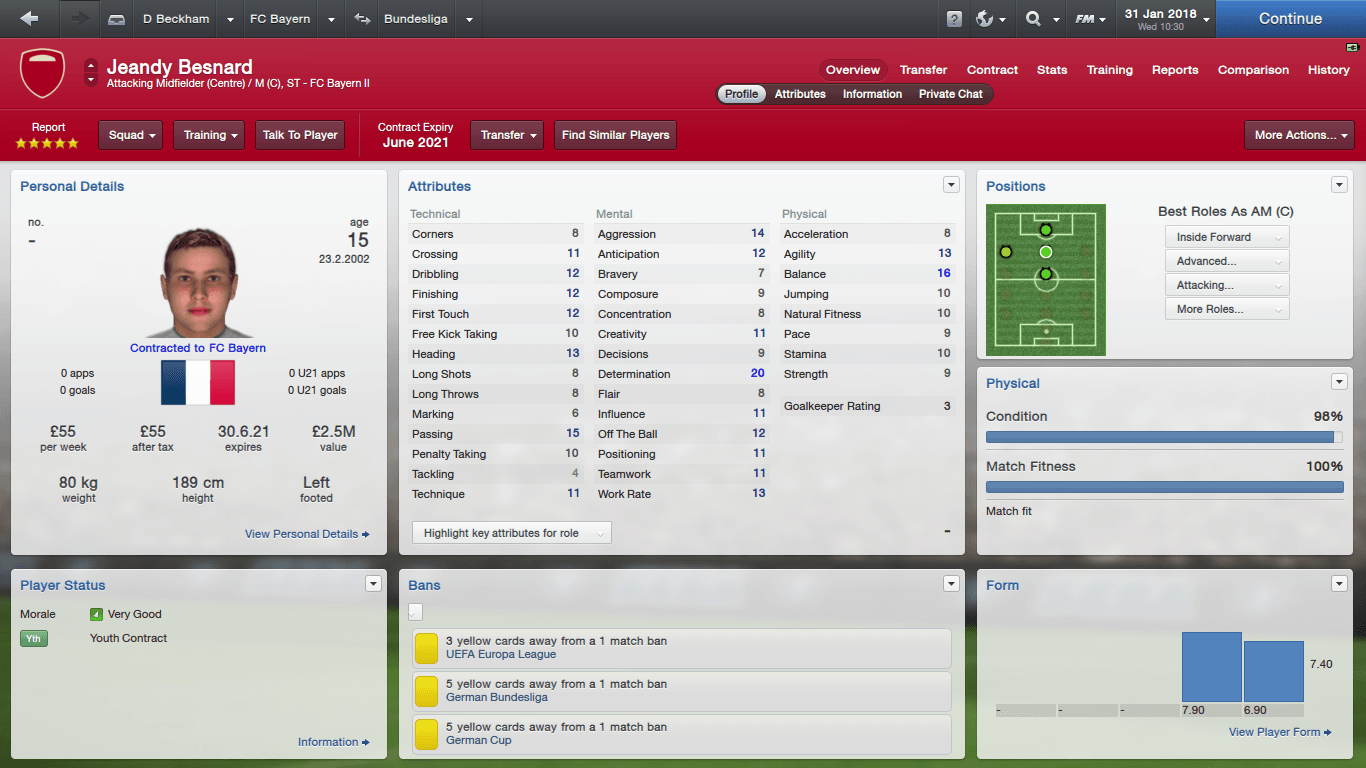 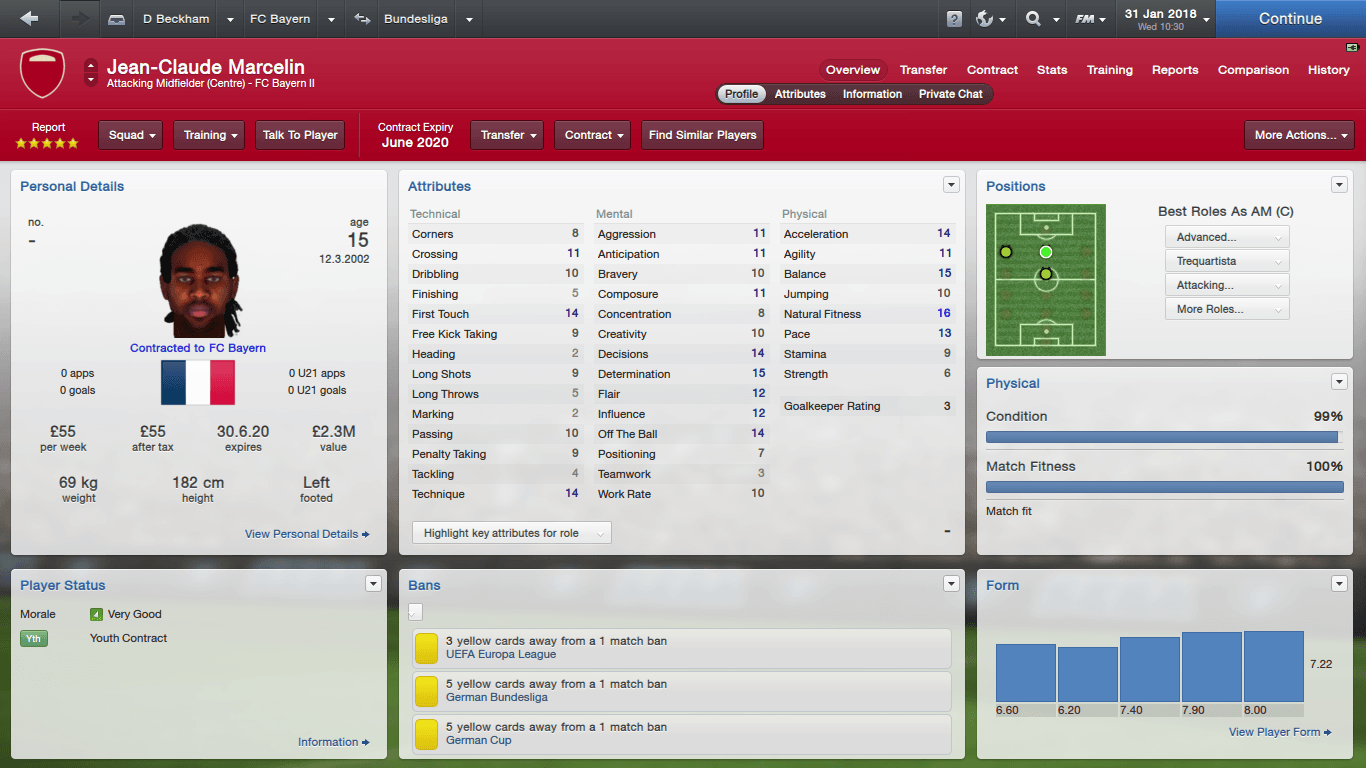 Currently one of the best French talent in the country, the acquirement of Besnard and Marcelin will be crucial for the future of Die Bayern, with David Beckham only adding the French duo to an Under-23s team of talented youngsters like Eros Baldoni and Dawid Kozlowski.

Both Frenchmen have already made a winning start to life at Bayern, with Besnard already having 2 goals and 2 assists in 3 appearances for Bayern Under-23s while Marcelin also holds 2 assists for the Under-23s side.
Login to Quote

TheMS99
9 years
I think that the title is yours if Ademilson can repay you for tg=hat 48 million spent.
1
Login to Quote

Jamesg237
9 years
Wow! I don't think I have ever paid tthat much for a player before. Highest for me must be £30mil! I hope he pays back that huge transfer fee!
1
Login to Quote

Glenn T
9 years
Thanks for the awesome comments guys

k1rups
9 years
Woaaah big money move :p Looks like all that money from the sales went to good use

Nice regens there too!
1
Login to Quote

January: Calm Before the Storm

A fairly uneventful January for Bayern Munich as they participated in two friendlies against 3. Fußball-Liga side Kiel as well as Brazilian club Internacional. This was followed up by two league matches against Mainz and Freiburg. It has been a pretty relaxing month for the Munchen men but the next two months are going to be very crucial for Bayern if they want to stand any chance of wrestling the title from league leaders Schalke, who are still 10 points clear at the top. 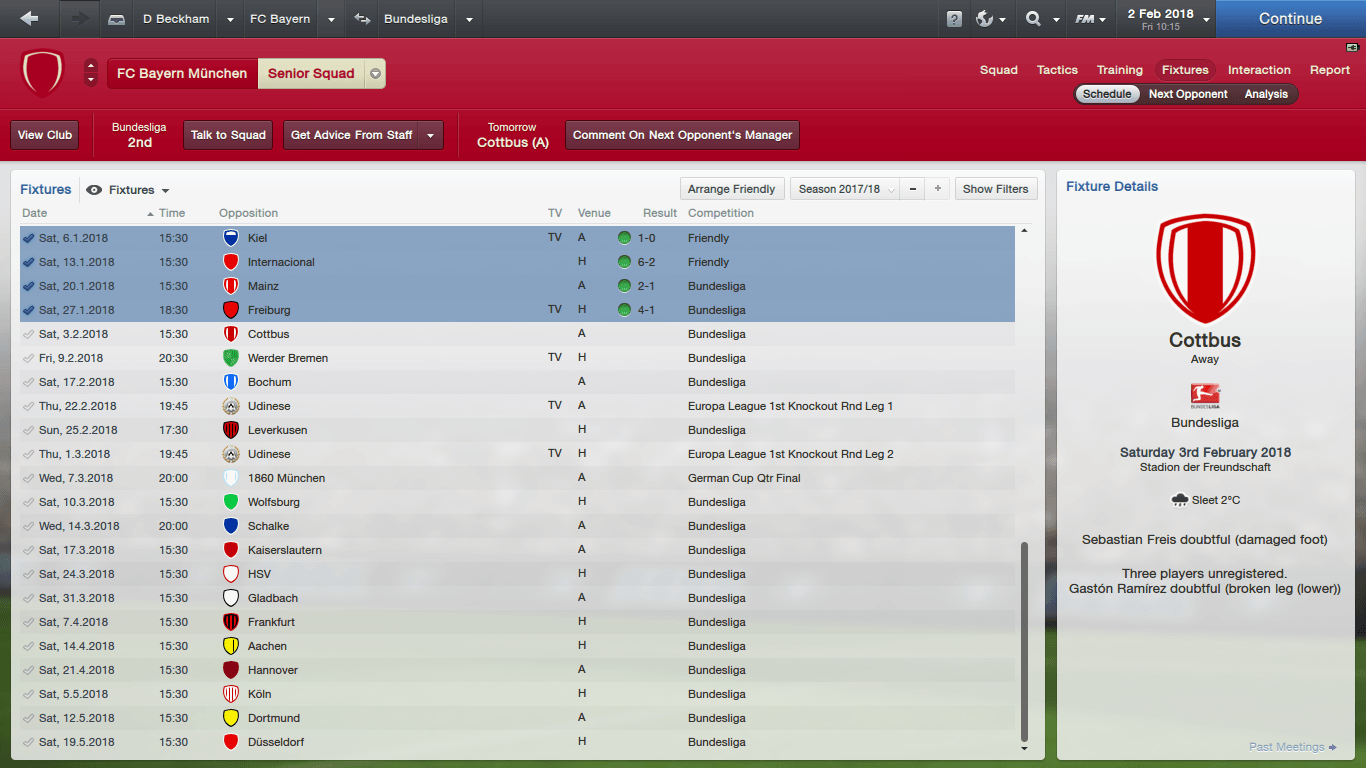 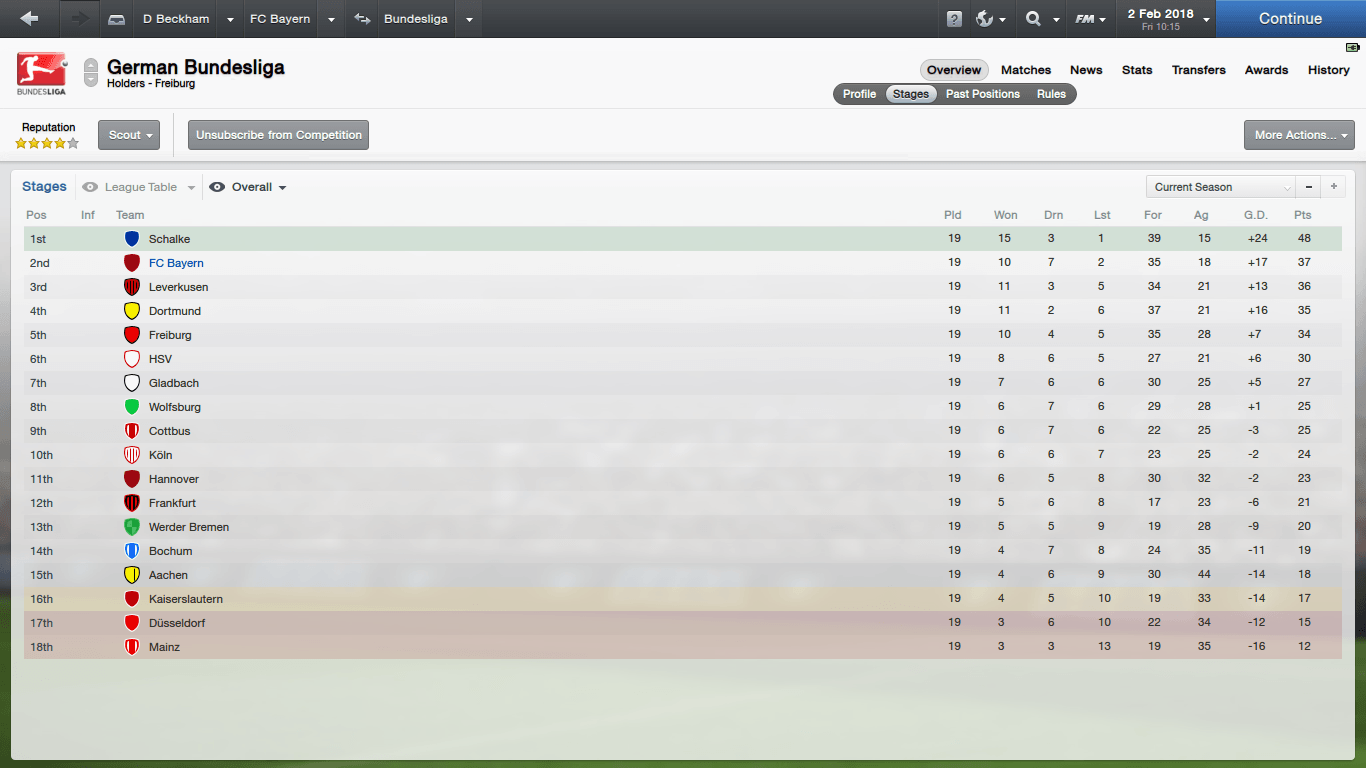 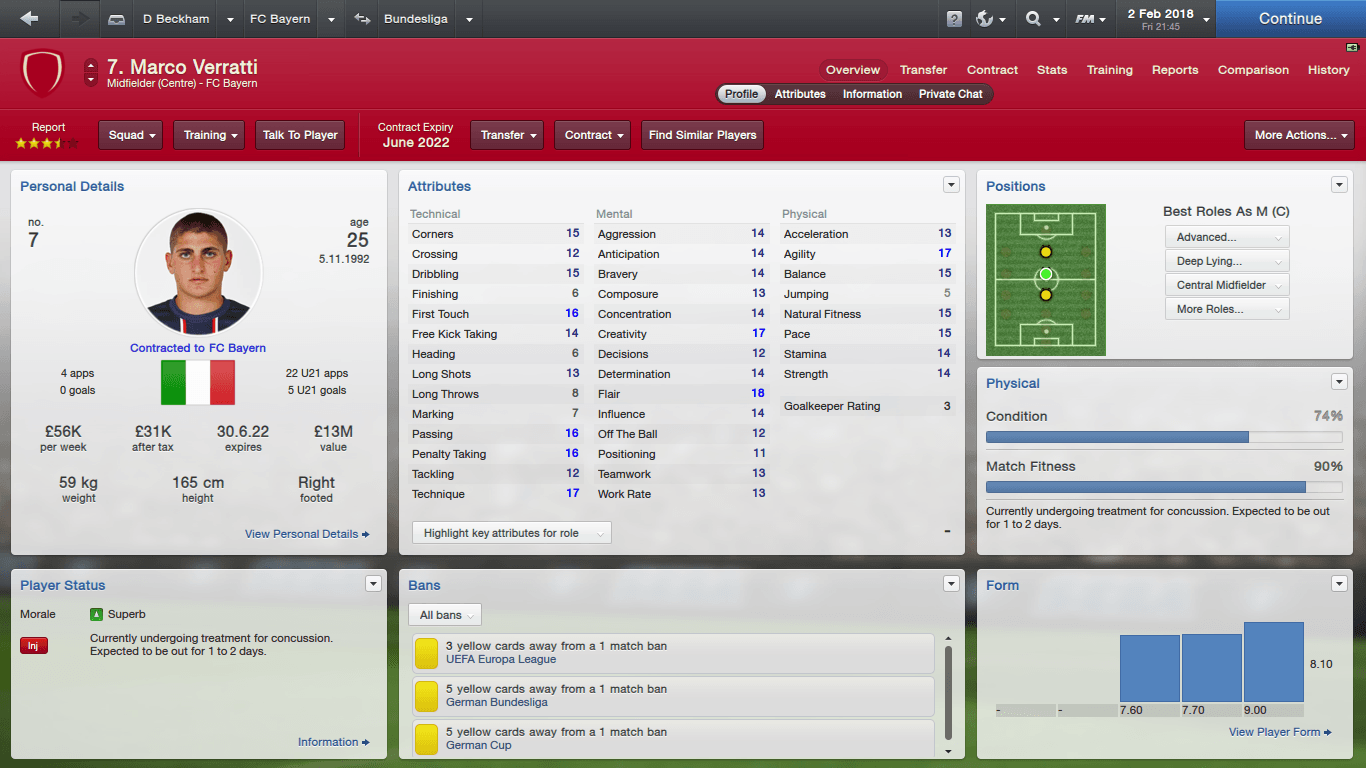 Just days after arriving at Bayern, Marco Verratti participated in a friendly against Internacional for his new club and impressed in a midfield partnership with Ramires and Toni Kroos. His first Bundesliga match came against Mainz and he was instrumental, setting up the two crucial goals that handed Die Bayern the three points they needed and claiming his first Man of the Match award in his first appearance. In his second appearance against Freiburg, Verratti ran the show again along with Kroos as he scored his first goal in a Bayern kit as the club ran out 4-1 winners. The Italian has looked like an inspirational signing so far and David Beckham will hope that his form can continue pushing Bayern up the table. 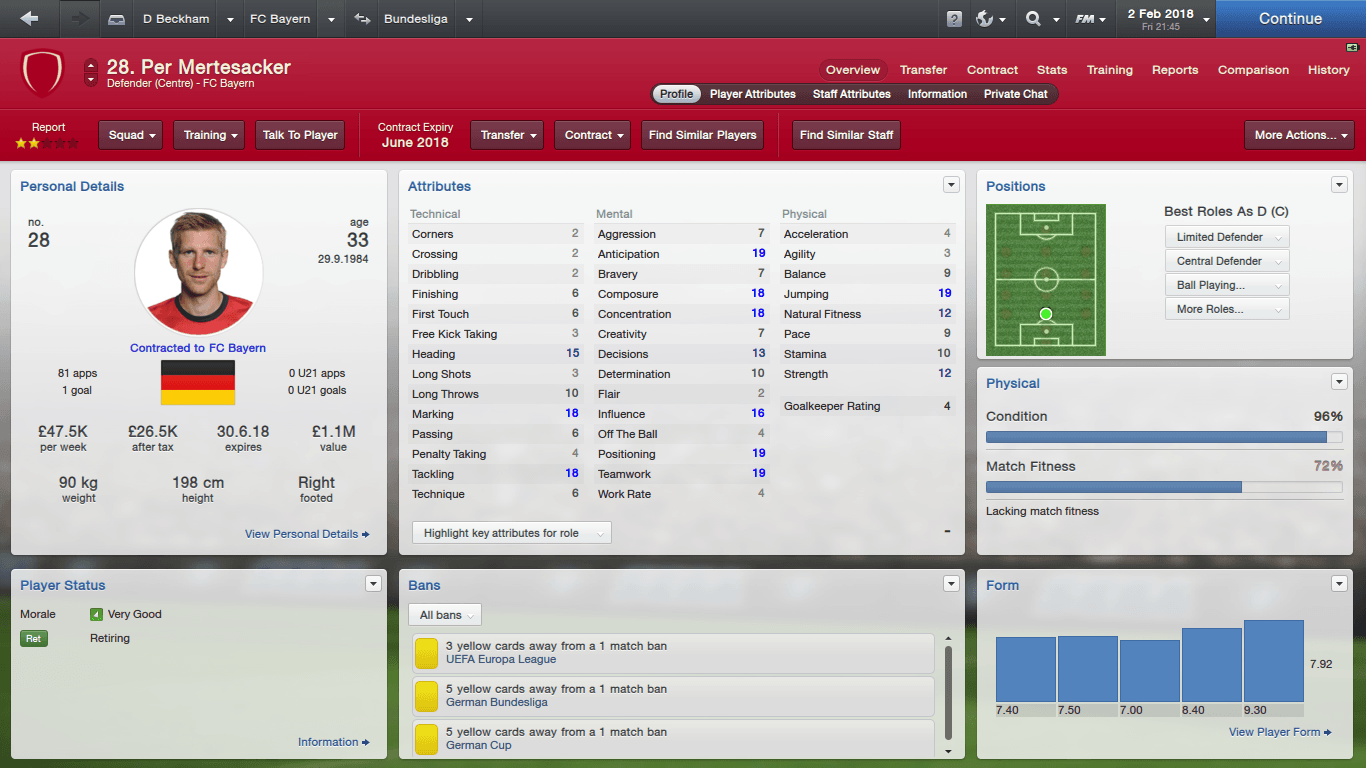 33-year-old Per Mertesacker, who has announced his retirement at the end of the season, has been re-introduced back into the team after being frozen out under former boss Rafa Benitez, and played in both friendlies against Kiel and Internacional. In both, he was the main man as he scored a towering header against Kiel and followed this up with two goals against Internacional. For a man who has just returned from starting eleven exile, it is a rather impressive showing.
Login to Quote