Search
FM Scout is the only community you can talk Football Manager in real time. Here are 10 reasons to join!
Home › Downloads › FM 2014 Downloads ↓ 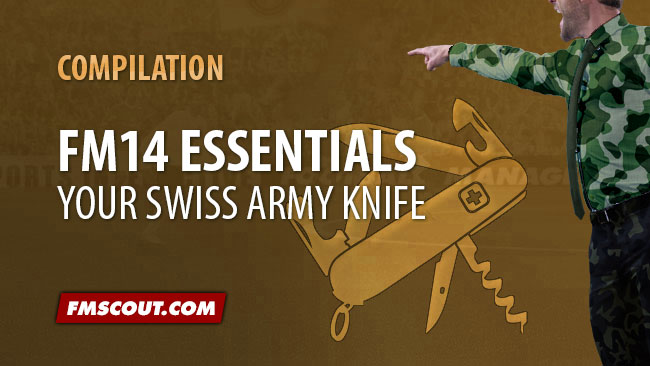 FM14 Essentials is here to bring you the low-down on what guides, tools, discussion topics and downloads are a must for all FM players around the world; from the experienced veterans of the game to the newbies looking to settle in to the rigorous life of playing the most addictive game known to man. Everything in this article can help to make your FM experience more than just a game of choice.

While most everything you need to know about Football Manager 2014 can be found in the game itself through the in-game Tutorials & Manual, there are a number of other details which will not be revealed to you. For example, the new Steam Workshop has seen it’s first FM game and you can learn all about it Here. If your game is crashing due to sudden crashes which cannot be stopped, Verifying Your Game Cache should be your first strategy. You can find more must-know info, such as How To Find The Official FM14 Editor in our Getting Started FAQ Forum Section and take note of our Fixes To Common Errors Forum Section.
Author’s Pick:


Guides – Back To Basics

Let’s start from scratch, for all the new FM players out there reading this. From the outside, this game looks like a very complex system with an overwhelming amount of choices and paths which you can take. Well, that would be a major under-statement as the world inside Football Manager will blow you away. When you take in to account that you have the potential ability to load over 250,000 unique players, staff & others in this game, not including those in leagues which you can add on to your game, FM begins to seem scarily large. However, you are not alone in this new challenge. Here at FM Scout, we have an entire forum section dedicated to Getting Started on FM, as well as some very well written guides, including guides on how to create a successful tactic, Lower League Management (LLM), mistakes to avoid to keep your job and Creating A Title-Winning Squad. We are constantly adding to our guide collection so make sure to keep checking! Along side these game guides, we also have a growing section on Team Guides.
Author’s Pick:

We have a number of player lists and a staff list which can help you identify top players and coaches which you could bring to your club. Even if you do have a very in-depth knowledge of footballers and coaches around the world, you will certainly be able to add a few more names to your reservoir of football genius after reading through these Player & Staff Lists. The player lists include Wonderkids, Top Bargains, Best Free Players & a Moneyball Shortlist. We also have a very unique and useful online player database called Social Scouting. You can use this to find players where anybody can upload screenshots, rate and write reviews on players they have used in their own FM saves. If you can’t find a player you want, you can also make a request for a player to be added to the Social Scouting database too!
Author’s Pick:

Face & Logo Packs - Put A Face On Those Names

While licensing limitations restrict the amount of faces and logos which are included in Football Manager 2014, as you download it, you can most certainly download many different styles of Facepacks and Logopacks. Facepacks are available in many different styles, ranging from Cut-Out to Panini Sticker. The most downloaded facepack, and possibly a personal favourite of mine, is the DF11 facepack. The facepack has become so successful that there has even been a DF11 Skin released for it! In terms of logo packs, you cannot go wrong with the TCM'14 Logos Megapack. Other logopacks on the scene include DL'14 Logos, Old-Style Logos and if you are looking for a retro, stylish logopack; FM Slovakia Retro Badges. These face and logo packs will help brighten up your game and help you connect with your club and players even more, on a visual level.
Author’s Pick:

Skins - Give Your Game A New Feeling

No FM game is complete without a Skin and you can be assured that there are skins for everybody’s liking. While SI did not add a dark skin in to their game this year, you can download the Official FM14 Dark Skin here. If you are looking for something more eye-catching or exquisite, perhaps the Alavanja14 Pervection or the Scorpio V8 is for you. For the FM Classic players, there is a very popular skin available called the FMC Flut Skin, which has proven to be an absolute hit here at FM Scout. All these skins add an extravagant colour and texture to your game, and you will not regret downloading any of them. Skins do not slow down the speed of your game, it just takes a little longer to load up a save. From then on, it is plain sailing and you have a luxurious skin to enjoy!
Author’s Pick:

What are data packs? They are editor data which you can download and apply to a new save. Please take note that downloading them does not affect a save which you already have; they only affect new save games when you have selected editor data for that save. These data packs include a 77 League Megapack, with none of the leagues available in FM’s pre-set leagues, an English 12 Tier Pack and for those who want to play with the legends of before, an 80's Legends Pack. If you are looking for unofficial transfer updates, Steve85's Transfer Update Pack and pr0's Transfer Update Pack are among the most updated and popular to download. However, if it is eccentricity which you are looking for, we even have a Game Of Thrones Database to download!
Author’s Pick:

Tactics - Find Your Style Of Play

If you’re looking for a tactic to download to use in your saves or looking for tactics to use as inspiration for your own, you have come to the right place! FM Scout has the largest array of tactics available anywhere with no less than 78 tactics for FM14 as of the time which I am writing this. These tactics range from possession tactics such as OPAgusta 4-3-3 Possession Football, to an Ultimate Physical Tactic and even some tactics which replicate those used in real life, such as The Brendan Rodgers System. The most downloaded tactics on FM Scout includes Wondertac 4-1-2-2-1, 4-2-3-1 of Rafa Benítez and Klopp's Total Football.
Author’s Pick:

Tools - Work Behind The Scenes Of Your Save

There is just one final section to be discussed in this FM Essentials article directly related to the game itself, and that is tools for FM14. We have five tools available here at FM Scout for FM14 and three of them are exclusive to our site. The most popular tool is Genie Scout which allows you to search the game for players and coaches which suit your search parameters, as well as being able to see their potential abilities. While SI released an official in-game editor, it does cost you money to buy. However, you can download and use FM Editor Live for free. While it does not yet have all the capabilities of the official in-game editor, FMEL is still in it’s early stages and it will have more functions every year. MacAssitant RT is the Mac version of the editor, as the other two or not compatible for OS reasons. For those of you who are sick of looking at the same old kits on FM, you can make your own kits with Smart Shirt Designer 2. While it does not have the abilities of Photoshop, it is a very useful and easy-to-use tool. Our final tool available for FM14 is FM Speeder, which, as the name suggests, speeds up your FM loading times. Complete your FMing experience with these tools!
Author’s Pick:

Forums - A Place For Everybody

While these don't affect your actual game yourself, we have a wonderful forum here at FM Scout which has many topics for discussion. Whether you want to discuss Tactics or Graphics or FM in General, there is a place for everybody. We even have our own live chat system where you can talk with other FM Scout members freely. One very popular section in our forums is our Stories section, where people write about their FM adventures. Some people write for fun, others write to compete in our Story of the Month competition, which has been very exciting in recent months and has produced a lot of good stories, such as Nick's Tottenham Hotspur: Like A Boas story, pompeyblue's Portsmouth FC - We Own Our Club story and Jamesg237's All United: The Toon Army story. If you are looking for an exciting adventure to read up on or if you are looking to describe one which you embarked on yourself, this is the place for you!
Author's Pick:

Note From The Author

This FM season has been a thrilling and exciting one for me personally. As an admin here at FM Scout, I've had a front-row seat to the world of Football Manager as it has developed from one year to the next. The game has developed enormously and while some people don't like the pages, I am among the those who do enjoy the changes. While SI have made some controversial decisions with FM, most notably the new tactics system, I do think that they have been for the better. With big promises made for FM15, SI's next instalment of the series will hopefully be a hit and one which I will hopefully enjoy as much as this one.